Geomicrobiology: How Microbes Shape Our Planet

Ecosystems Beneath the Surface

In the curriculum unit, Ecosystems Beneath the Surface, students will develop an understanding of ecosystems that exist in a dimension not in view to the naked eye and that this dimension exists in the microbial world found in communities called microbial mats. Students will gain insight into microorganisms that rely on the sun for energy, and other microorganisms, in particular, prokaryotic bacteria and archaea that can harness energy from other inorganic sources. These diverse species help to recycle minerals necessary to support life on Earth.

They will examine microscopic organisms found in the salt marshes of the Long Island Sound, in particular, purple microbial mats that are considered to be "layered communities." They will discover the interdependence and recycling of these organisms through the sulfur cycle. Through hands-on activities, students will be given the opportunity to distinguish between the different layers of the mat and see how each layer depends on the other layers for survival.

This unit will be taught to four sixth grade general science classes at Betsy Ross Arts Magnet School in New Haven, CT. Science is departmentalized at Betsy Ross and each class period is fifty-two minutes long. The sixth grade curriculum has four science standards that must be taught throughout the year and these are: Ecosystems, Simple Machines, How Human Activities Affect Our Waters, and Weather. Two of the standards, Ecosystems and How Human Activities Affect Our Waters, will be directly enhanced through teaching this unit.

Students will engage in several activities that will take a series of months to complete and this fits into the sixth grade curriculum since three of the four units overlap and are not exclusive of one another and those units are Ecosystems, Weather, and How Human Activities Affect Our Waters. All three of these units discuss the water cycle and how/that life on Earth cannot exist without water, even in the microbial world. Connecticut has instituted embedded task performances (see Appendix) and the sixth grade embedded task entitled "Dig In" deals with properties of soil. Implementing this unit on microbial mats will compliment the embedded task.

All life forms require energy in order to carry out life functions such as eating, breathing, reproduction and growth. This energy comes from the surrounding environment. Life forms would not exist without the existence of microorganisms. The oxygen that humans need would not be here if not for the cyanobacteria that exist in microbial mats. Life exists in three domains: eukarya, bacteria, and archaea. The eukaryotes include organisms such as fungi, animals, and plants. Then there are bacteria and archaea which make up most of the microorganisms and are both prokaryotes--single-celled organisms without a nucleus or many other organelles. The major difference between bacteria and archaea is, not in their physical appearance or morphology, but in their DNA sequences. Bacteria and archaea are similar in that both are prokaryotes which mean they do not have DNA enclosed in a membrane-bound nucleus whereas eukarya do.

Since all life forms require energy in order to carry out life functions, energy and electron flow are used interchangeably. Energy, on a chemical/cellular level, is referred to as electrons, which are part of all atoms that make up matter. Organisms need an electron source and an electron sink in order for electrons to flow. Organisms need this electron flow in order to produce ATP. ATP is adenosine triphosphate and is considered as the universal energy currency for metabolism. This allows organisms to reproduce, grow, and perform other life functions. Microorganisms, like macroorganisms, gain energy for life from their environment. Various ways of gaining energy are listed below:

•Photosynthesis is the conversion of light energy into chemical energy.
•Aerobic respiration is the process by which organic or inorganic substrates or electron donors are degraded/oxidized--completely to CO 2 in the case of organic matter, and oxygen is the terminal electron acceptor.
•Anaerobic Respiration is a process in which organic or inorganic substrates are oxidized/degraded, but using a substance other than oxygen as the terminal electron acceptor.
•Autotrophy is the process whereby production of organic biomass comes from inorganic carbon (CO 2 ).
•Heterotrophy is the process by which biomass is formed from pre-existing organic matter.
•Chemolithotrophy is the production of energy from the oxidation of inorganic electron donors. Examples: Sulfide Oxidation, Iron Oxidation, Nitrification (or ammonia oxidation).
•Fermentation is an anaerobic process in which organic compounds are degraded or oxidized incompletely resulting in an organic product.

Phototrophs are organisms that "eat" light by capturing the energy from the sun in order to transfer that energy to weak electrons in water to turn those electrons into high-energy electrons that can reduce other elements. This is necessary to carry out the two main functions of electrons or energy within living organisms and that is: (1) to have electrons flow downhill in order to convert electron energy in to a useful form of chemical energy for the cell, ATP, and (2) to create biomass by reducing carbon dioxide by way of the Calvin Cycle. Most phototrophs [and chemolithotrophs] are also autotrophs which mean that they can fix carbon. They are labeled photoautotrophs. Chemotrophs are organisms that obtain their energy from chemical oxidation of organic (chemoorganotroph or heterotroph) or inorganic (chemolithotroph) substances. Heterotrophs obtain their energy by consuming other organisms. Combining these categories, we get the basic life strategies: photoautotrophs (e.g. plants), chemoorganotrophs or heterotrophs (e.g. animals, fungi), photoheterotrophs (some bacteria) and chemolithoautotrophs (bacteria and archaea only). Only in the bacteria - and among the bacteria within a single Winogradsky column - do we find all of these basic life strategies. (Deacon n.d.)

Microbial mats are the oldest ecosystems that exist on Earth. Although this ecosystem can be only a few millimeters thick, it carries out all the functions of a complex food web in that these microbes depend and are depended upon by other members of the community. It is an amazing arrangement how these microorganisms harvest energy. The top layer of the mat are filled with diatoms which are phytoplankton and are also photosynthetic- the brown algae and are encased in glass (i.e. silica shells). The blue-green bacteria known as cyanobacteria are located near the top of the mat. These microbes harvest energy from the sun and, thus, use the process of photosynthesis to carry out their life functions like the diatoms. Under this layer are the aerobic heterotrophs which use the oxygen produced by the cyanobacteria and diatoms to break down organic matter. Next come the chemolithotrophic bacteria, such as filamentous sulfur oxidizers, which use the redox energy contained in the gradient between the reduced sulfur compounds (produced at depth by the sulfate reduction or sulfate-reducing bacteria) and the oxygen (produced by the cyanobacteria).

The next layer comprises phototrophic bacteria that use infrared radiation which can penetrate deeper than visible light. These bacteria use the infrared radiation and reduced sulfur diffusing upward from below to carry out anoxygenic photosynthesis--meaning that oxygen is not produced. The fermenters are next in the mat. These microbes do not break down or oxidize their food (organic matter) completely, but transform it into different, partially oxidized organic compounds that other organisms in the community can utilize more readily as a source of electrons. Deep within the mat are the sulfate reducers, bacteria that use sulfate to burn [or oxidize] organic matter. These organisms breathe [or respire] sulfate rather than oxygen and produce hydrogen sulfide as a waste product, similar to the way we respire oxygen and exhale water vapor as a waste product. Sulfate-reducing bacteria account for the "rotten egg" smell typical of salt marshes and marine mud. The last of the organisms are the methanogens which produce methane--following depletion of sulfate, and are the least efficient in terms of producing energy to support cellular function. Thus, three of earth's major biogeochemical cycles are affected by activities of microorganisms within these mats: the oxygen cycle, the carbon cycle, and the sulfur cycle.

Out of the three cycles, the sulfur cycle is the most complex because of the multiple oxidation states of sulfur and the fact that some transformations occur at significantly different rates both chemically and biologically. (Madigan) As with the nitrogen cycle, most organisms cannot use elemental sulfur directly so they rely on sulfur-reducing and sulfur-oxidizing bacteria, in this case to convert sulfur into a useable form of sulfide (S 2- ) or sulfate (2H 2 SO 4 ). This can be turned to proteins. Sulfur is also important in the production of coenzyme A which is needed to produce energy in cellular respiration. The formula for this process is:

Photosynthetic bacteria, such as purple sulfur bacteria, can produce organic matter by using sulfur and light. The following formula illustrates that process:

Microbial mats provide an excellent source of nutrition for predacious organisms and therefore for these mats to survive, they must grow in extreme conditions such as hot, cold, or salty environments. 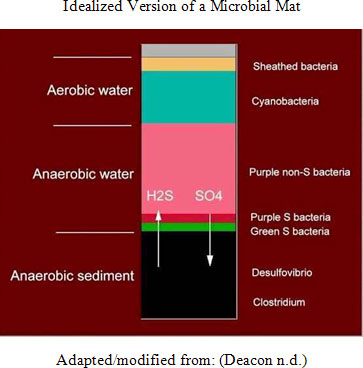