1. Students will be able to identify and describe the goals and tactics of the American abolitionist from 1800 to 1861.

2. Students will be able to identify and describe the actions of, John Brown and Nat Turner.

3. Students will be able to identify and describe the state of race relations in the late 1960's and the early 1970's.

4. Students will be able to identity, and describe the actions taken by, especially the murders committed by, Charles Manson's "family."

5. Students will be able to identify and describe Ruby Ridge siege and the Waco Standoff, survivalism, and the anti-gun control movements at about that time.

6. Students will be able to identify, and describe, Timothy McVeigh, and the bombing of the Murrah Federal Building.

7. Students will be able to identify, and describe, the radical anti-abortion movement.

8. Students will be able to identify, and describe, James Charles Kopp, and his shooting of abortion doctor Barnett Slepian.

9. Students will research, and present the result of the research, on Brown, Turner, Manson, McVeigh, and Kopp, with respect to the following: family history, marital status and/or issues with intimacy, employment and financial problems, history of violence, views of authority, religious beliefs, political beliefs, and affiliations with causes or groups.

Students will deliver their conclusions about how these men are similar or different, based on the results of researching and creating profiles, in a debate/discussion for posting to the Wilbur Cross High School podcast site.) Here are some free associations that might illuminate some common threads, and not so common threads in these subjects:

-Charles Manson: sociopathic, violent and using others to commit most violent

acts in the name of starting a race war, possibly insane/psychopathic

US government for Ruby Ridge

culture, resentment and anger at US government

Day One Lesson Plan: Introduction to The Unit, and Abolitionism

A. Learning Objectives-The students will be able to

1) identify and describe the abolitionist movement of the 19 th Century.

2) identify and describe John Brown, The Pottawattamie Massacre, and

4) Describe the possible motivations behind John Brown and Nat Turner's

B. Initiation Strategy: I will read the description of John Brown's Pottawattamie Massacre from Raising Holy Hell, and pose the following question, what would make someone decide that killing innocent people can be justified, or, to put it another way, what kind of person will kill an innocent person in the name of a cause?

1. Students are given two minutes to write about their reaction to the reading and to the questions. This is "thinking on the page."

E. Homework: Students read an excerpt from The Confessions of Nat Turner , and write one page about his motivations and explanations for his rebellion, in particular the killing of women and children.

2) identify and describe Timothy McVeigh, and the motivations behind his bombing of the Murrah Federal Building.

3) identify and describe James Charles Kopp, and the motivations behind his shooting of Dr. Bernard Slepian.

Students are shown ten minutes of film clips on all three, and are asked to write for ten minutes about whether any of the actions depicted can be justified by a cause, and if not, what might explain their actions: insanity, early childhood trauma, having been brainwashed by radical philosophy, etc?

D. Closure: Teacher plays a news clip about Tim McVeigh's execution and reactions to it by residents of Oklahoma City.

E. Homework: Student are put into 5 groups, and they review the "Profile of Some Domestic Terrorists" and fill in what they or think or know so far.

Day Three and Four Lesson Plans: Putting Together a Profile

1) research and compile a detailed profile of the subjects.

2) develop a theory about what explanations can be found for the subjects' actions.

3) identify and describe what make the subjects similar or different.

B. Initiation Strategy: What have your learned so far about what made these men cause the death of innocent people? What do they have in common, and how are they different? Let's go further and do the research.

1.Students, in groups do two days of library research, using the attached chart and creating their own about their own subject.

D. Closing: Teacher explains the written homework task, and explains the debate/discussion forum and what a Podcast is. 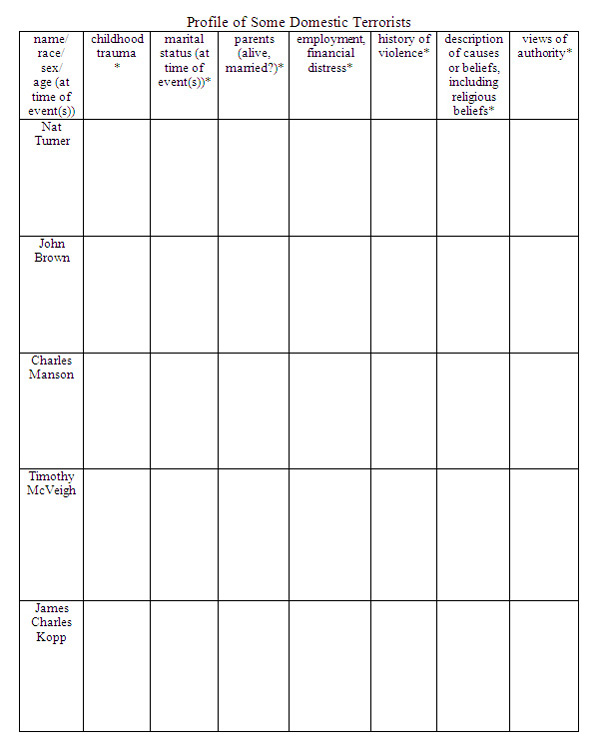 *Use quotes from the time wherever possible, citing source. You may also add or substitute your own profile characteristics.

1) make an oral presentation about how their subject was able to justify the killing of innocents.

2) discuss/debate the question of whether any cause can justify the killing of innocent people.

3) support their arguments with relevant facts and references to sources.

B. Initiation Strategy: Teacher models, with three student volunteers, the use of microphones, enunciation, and rules of the debate/discussion

Students have a debate/discussion about whether killing innocent people, even in the name of a cause, can ever be justified, and included in that debate a presentation of the profile of their subject.

D. Closing: Teacher plays back five minutes of the discussion.