The Brain, Our Silent Partner: Anatomy and Cognition

Anatomy of the Brain

The physical structure of the brain can be compared with its mental organization and evolutionary origins. 9 When examined from the outside in, it is as though one is tunneling back through time when burrowing vertically through the skull from the top of the head to where the spinal cord connects with the brainstem. Deep down in this region, functions are regulated by the unconscious, autonomic systems of the pons, medulla, and thalamus, whose origins are rooted in the primitive reptilian brain. Moving vertically outward through the limbic system and then just beneath the skull, we find the most highly complex fully conscious mental processing center of the brain, the cerebral cortex, a thin gray matter that covers the four lobes of the cerebrum, 10 the latest and greatest evolutionary feature of the brain. 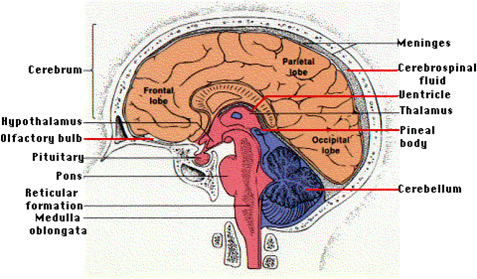 The three parts of the brainstem are the midbrain, pons and medulla. The functions at the brainstem are highly involved in the autonomic systems of our body. Carter compares the brainstem to the ancient reptilian brain because of their anotomical and functional similarities, particularly the regulation of autonomic unconscious movement. All the nerves that run between the spinal cord to the brain pass through the medulla. 11 Of the 12 cranial nerves that serve the head, 10 connect to the brain stem. The olfactory (1 st cranial) nerve goes directly to the limbic system. 12 The optic nerve (2 nd cranial) is actually a tract of the brain, connecting directly with the thalamus. The medulla monitors, controls and regulates respiration, heartbeat and blood pressure as well as vomiting, swallowing, coughing and sneezing. Circadian rhythm, our body clock, is passed to the brainstem, from the hypothalamus, so that body processes follow a 24 hour rhythm. 13 The pons looks like a bulge on the side of the medulla, like an aneurism. Pons means bridge in Latin, which describes the way the pons links the lower brainstem and the cerebellum in order to coordinate complex muscle movement. 14 The pons serves as a relay station made up of bundles of nueronal pathways that connect the cerebrum and sensory input coming up from the spinal cord and the cerebellum. The midbrain's main fuctions are arousal or alertness, eye movement, body movement and hearing. 15

The cerebellum, or little brain, is located in nape of our neck. The main function of the cerebellum is to regulate and integrate the actions of the muscles in order to produce balance, coordination, muscle control, and learning new motor skills. 16 The cerebellum is divided symmetrically; between each hemispheres of the brain. Its surface area consists of dense deep folds like the cerebrum. It is thought that the cerebellum stores memories of automated movements like walking and swimming. Recent studies suggest that the cerebellum serves as a support structure for cognitive processing by coordinating the processing of thoughts, emotion, memory, and senses. The cerebellum secures an elaborate number of motor tasks with automaticity, thus freeing up mental space for other activities. 17

The thalamus is made up of two oval masses, shaped like two small eggs sitting side-by-side 1 ½ long by ½ inch wide. 18 The thalamus receives a plethora of nerve signals coming from all the senses, except smell, through the cranial nerves and spinal cord as they pass to the sensory cortexes in the cerebrum. When this information passes through the thalamus, it integrates, screens, and sorts incoming sensory information and then relays it to the cerebral cortex and appropriate parts of the brain for further processing. In this way, the thalamus is screening sensory input enabling more focused attention on matters of value and filtering out distractions. 19

The cerebrum is the largest part of the brain and divided into four lobes with specialized functions: the frontal lobe, temporal lobe, parietal lobe, and occipital lobe. Korbinian Broman a German neurologist, actually mapped the cortex based on its microscopic anatomy of cells on the arrangement of nerves. The occipital lobe is involved with processing visual information. The temporal lobe is the home for the auditory cortex where our unique ability to make sounds and speak is a function. The temporal lobe is involved with auditory processing of music, sound, comprehension of speech and some memory. Our unique ability to make sounds and speak is a function found in the temporal lobe in Wernicke's area, named after the neurologist who discovered it. This is where information associated with the printed word/language is processed. It is normally located only on the left temporal lobe of the left cerebral hemisphere, defining one of the many characteristics of this hemisphere. The parietal lobe is involved in movement, orientation, calculation and certain kinds of recognition. The frontal lobe is involved in movement and the most integrated processes of brain functions. This is where the brain conducts its highest order thinking, planning, conceptualizing, and is able to appreciate and interpret and regulate emotion according to Carter. 25 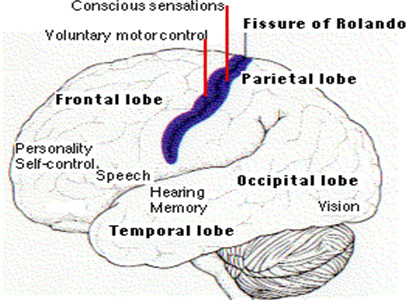 The frontal lobe maintains attention and intense concentration filtering out other objects of attention so that maximum cognitive resources are available for the task. 26 The prefrontal cortex is part of this frontal lobe located directly behind the forehead. The frontal lobes are where executive function is located. It is the most evolved of the lobes, able to retrieve and process vast amounts of information from various systems of the brain to evaluate, problem solving and create. 27

Although the cerebrum is divided into four main lobes, specialized functions have been identified and marked by specific folds on the cerebrum called cortical areas. Below is a chart naming each cortical area and the major function associated with the area.

Cortical Areas of the Cerebrum

The cortex makes up about 40% of the brain's total weight. This highly developed layer of gray matter is only an eighth of an inch thick, and has 20 billion neurons. These neurons are organized into six layers. The cortex covers both the right and left hemispheres of the cerebrum and is characterized by deep folds and groves called sulci and gyri. These dense folds triple the surface area of the cortex enabling increased surface area to fit into the skull. If smoothed out, the wrinkles would cover 2.5 square feet. 29 The cortex enables us to perceive, communicate, understand, and appreciate. This is the part of the brain that is associated with all the thought processes related to consciousness, distinguishing our species as uniquely human. 30 The ability to know one as a "self" and understand ones character in a conscious way is a function of the prefrontal cortex. The intense neural density and connectivity of this gray matter is probably the most important characteristic of the cerebral cortex because they are the anatomical features that produced consciousness and our ability to exercise complex cognition, rationality, and creativity.

The cerebrum is divided into two hemispheres called the right and left cerebral hemispheres. A thick band of axons connect these two hemispheres. 300 million axon fibers form a bundle of cables called the corpus callosum. It is through the corpus callosum that the two sides communicate. 31 This neural bridge provides the pathway for a continuous dialogue between the two hemispheres. 32 The corpus callosum allows the two hemispheres to share memory and learning, as well as disease. In an effort to help patients with severe epileptic seizures, between 1961 and 1969, Dr. Sperry led a group of doctors that cut the corpus callosum. He studied the effects of this operation on his patients called, the "split brain" patients. It was discovered that the two hemispheres had a separate, distinct, and very different ways of viewing the world. Each hemisphere had no awareness of the other. Each acted independently and had its own kind of perception. 33 Although the right and left hemispheres function in distinctly different ways, together they work together each contributing their part to the whole. Each of the sides processes the same information in two distinctly different ways and responds to the information in equally unique ways. 34 The right side of the brain is often describes as being the artistic hemisphere, while the left side of the brain sees the details and is the verbal and analytic hemisphere. Language is located in the dominant hemisphere, usually the left. These are generalizations, since many functions are shared between the hemispheres.

After Jill Bolte Taylor, a neuroscientist, survived a stroke she provides this description of each hemisphere based on the recollection of her symptoms. During her stroke she experienced the world through each hemisprere of her brain very specifically during her own brain hemorrhage. Taylors describes the right and left hemispheres as having two distinct ways of processing information . She explains that the two hemispheres think about different things and care about differnent things, viewing the world with two very different personalities. The right brain is all about the present moment, the here and the now. It thinks in pictures and learns through the movement of our body, kinisthetically. The right brain interprets the present through the senses, interpreting the present moment through the streams of sensory energy; the smells, feels, tastes, sounds and sights, forming a "sensory collage" of the present moment. The right hemisphere views the world connected to each other as beauiful, and unique creatures, a family- a whole. Here to make the world a better place.

Taylor describes the left hemisphere as thinking linearly and methodically. It is logical. The left hemisphere is all about the past and future, it picks out details from the present to make predictions about the future. The left hemisphere is designed to pick out details from our enourmous sensory collage of the present moment catagorizing and organizing information and associates it with everything in the past that we have ever learned so that it can project the possibilites for the future. The left hemisphere thinks in terms of language, the "brain chatter." It is the little voice in our heads that connect our internal world to the external world. The two sides of our brain living side by side, separate, unique, special, viewing the world very differently, but together they create for each of us our customized perspective of the world we live in.