When the first immigrants arrived in New Haven, almost 400 years ago, they encountered a small tribe of war weary Native Americans. In return for this beautiful harbor, the Europeans promised the indigenous people sanctuary from marauding Mohawks. 20 Thus began our city's tenuous relationship between native and newcomer.

The turn of the 21 st century found New Haven like most other industrialized cities. It required a labor force- and a cheap one- to keep the factory lines running. Winchester Repeating Arms needed 10,000 workers at its plant in what is now the Dixwell-Newhallville area. In 1909, New Haven produced 58.5% percent of our nation's firearms and ammunition, as well as 38.5 percent of its corsets. 21 This seemingly never-ending supply of labor, mainly from Ireland, Italy, and Eastern Europe flooded in New Haven. They joined a migration of African Americans from the south. Census statistics show that the percentage of "foreign-born whites" rose from 3,697 in 1850 to 45,686 in nineteen twenty. 22 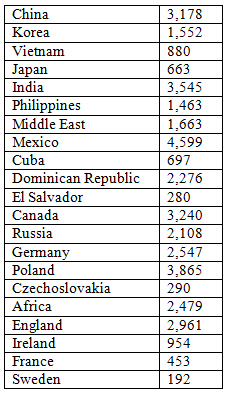 *Considered part of Britain at the time. 24

In New Haven, Latinos citizens were the only group to increase in size between 2000 and 2010. They currently comprise 27.4% of the population, which is a 34.6% increase. That translates to 9,148 people, and brings the total of documented Hispanic immigrants to 35,591. 25

Though far smaller in number, the Asian population also increased: from 3.9 to 4.5 percent during this time. The African American and white populations have decreased and comprise 33.4 and 31.8 percent, respectively, of New Haven's population. 26 I found that verifiable data was hard to obtain between censuses.

But population size is only one factor to consider; language also plays a huge role in immigrants' experiences. In Connecticut 80% of students for whom English is a second language have Spanish as their native tongue. Connecticut is also home to the largest population of migrants from Puerto Rico. 27 Though they have some of the same challenges that other immigrants face, they are American citizens and therefore do not always qualify for immigration-related government services.

New Haven is immigrant rich. Over twenty-seven percent of residents identify themselves as Hispanic; 28 thirteen percent is the national average. 29 One of the many ways in which people divide themselves is by their families' country of origin. Many of our students first understanding that they can belong to a different community is learning about their heritage. Examining immigration trends in New Haven will give us all a better appreciation of our city.