Water has four properties, known as emergent properties, these properties are due to the polar nature of the water molecule. Water consists of two hydrogens and one oxygen covalently bonded in a “V” shape with oxygen at the apex. The oxygen is more electronegative than the hydrogens and the electrons of the hydrogens spend more time closer to the oxygen. This structure results in a polar molecule wherein the oxygen has a slightly negative charge and the hydrogens a slightly positive charge (see figure 1). This polarity allows water molecules to interact with each forming weak hydrogen bonds between two opposite charges of adjacent molecules (see figure 2). Through this polarity and resulting hydrogen bonding, water gains four important properties: cohesive behavior, ability to moderate temperature, expansion upon freezing, and versatility as a solvent. 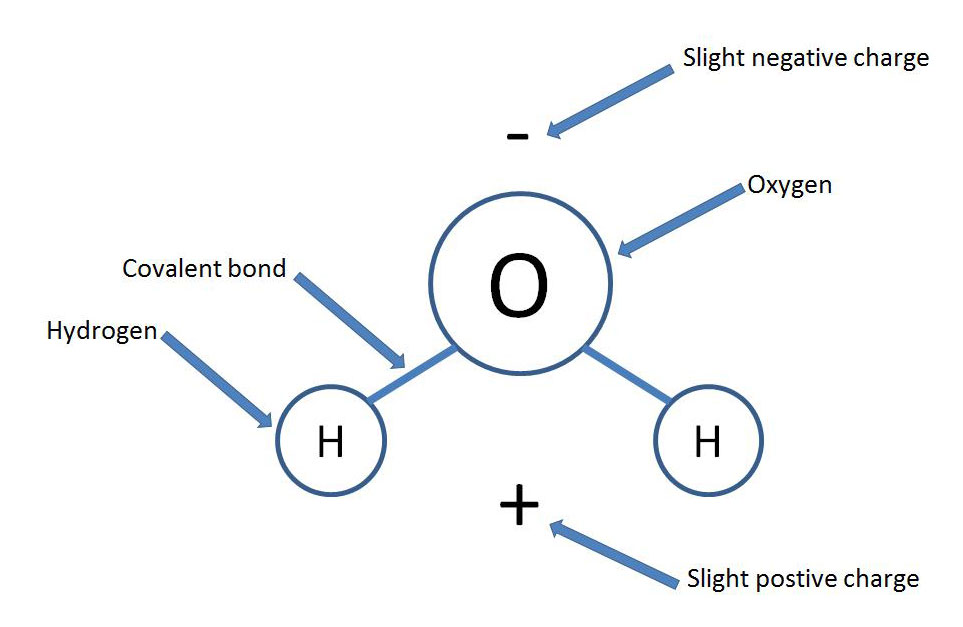 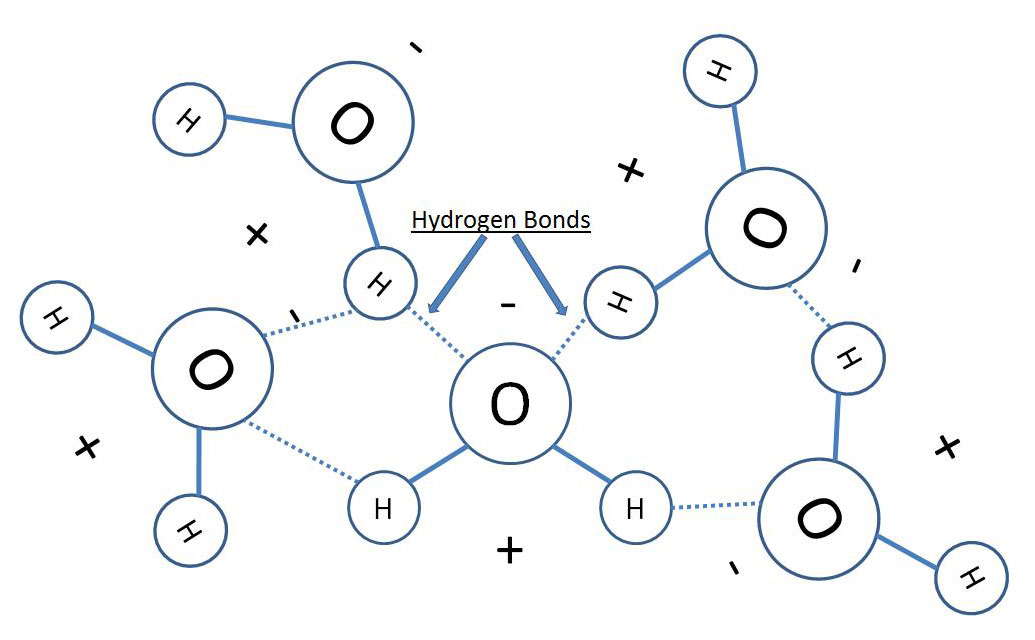 How does a tree transport water against the force of gravity? Cohesion is the attractive force between two like molecules. Simply put, water sticks to water. This is because water is a polar molecule allowing for interactions of opposing charges when surrounded by other water molecules. Adhesion is the attraction of water to other surfaces that have charged particles. These properties allow terrestrial plants to transport water throughout their structures through specialized networks of water conducting cells. Contained within the water are vital nutrients and minerals as well.

Cohesion and adhesion can be demonstrated in the classroom with capillary tubing. This is thin glass tubing that will draw water up, against gravity. The polar water molecules will interact with ions in the glass, bonding with the glass. The water that is bonding with the glass will also continue to be bonded with other water molecules. As molecules are attracted higher and higher up the tube they will drag behind them more water. This is similar to how water is transported within a plant and can be used for visualization. The water leaves the stomates when they open to acquire CO 2 . Due to this “unbroken chain” of water through the plants, when water leaves the stomates, water is drawn water from the roots upward. This upward movement is caused by the adhesive and cohesive nature of the water. This unbroken chain of water can be broken if the water freezes or an embolism forms due to a compromise of the xylem. This can threaten the fitness of the plant.

Why does our planet have such a relatively constant temperature? Water has a high specific heat. It takes one calorie of energy to raise 1 gram of water by 1˚C. Conversely as water cools, a calorie is lost for every gram of water that drops 1˚C in temperature. Water is held together by its hydrogen bonds, though weak in comparison to a covalent bond, they still require significant energy to overcome. This allows water to absorb heat without changing temperature rapidly in comparison to many other liquids. Heat is a measure of kinetic energy, a given volume of water’s total heat is a measure of its total kinetic energy. Temperature is a measure of the average kinetic energy of the molecules that make up the matter. Thus it is important to note that heat and temperature are not interchangeable. Students can struggle with this concept and it may help to have them consider that a boiling cup of water has a higher temperature than a swimming pool, but the swimming pool has more heat.

Earth’s temperature is relatively constant, in part, because of the water that covers 70% of its surface. This water absorbs heat during the day and summertime and releases this heat slowly at night and during winter months. The resistance of water to rapid temperature changes allows it to absorb and release massive amounts of heat while maintaining a relatively stable temperature. This has allowed for the persistence of life in our oceans as well because flora and fauna are subjected to major temperature swings. The movement of water among the oceans helps to distribute heat to areas of the world. For example, the Gulf Stream delivers heat to the west coast of Europe.

Most organisms are primarily water by mass. Considering the high specific heat of water one can realize that this allows organisms to avoid rapid temperature changes due to environmental conditions. Furthermore, many organisms utilize evaporative cooling. In the same note that it takes an energy investment to increase the temperature of water, recall that it also requires an energy investment to cause a phase transition of water from liquid to gas. Water on the surface of an organism will absorb heat from the body as well as the surroundings and when this water evaporates, it takes energy. The net effect is that the molecules left behind have less energy. This is a repetitive process that helps organism to maintain their temperature by essentially passing excess energy to water molecules to cause evaporation. This process of evaporative cooling also aids lakes and ponds in maintaining their temperature.

Very few substances are less dense as a solid than a liquid, water is one of them. Ice is about 10% less dense than liquid water causing it to float. This is due to the crystalline lattice structure formed when water freezes. Because of the polar nature of the water molecule and its “V” shape it is arranged in a crystal that has spaces when solid. This ice creates an insulating layer over lakes and ponds in the winter months. The ice allows liquid water to persist below it, a necessary medium for the flora and fauna to persist. If ice were denser than water our lakes and ponds would freeze from the bottom up completely changing the survival strategy of organisms.

This property of expansion upon freezing also helps to shape our planet. As water seeps into crevices and cracks of rocks and is then caused to freeze and expand it widens those openings. Over time this property contributes to the weathering and erosion of rocks. Not to mention the creation of obnoxious pot holes on our roads.

The polarity of water causes it to dissolve substances that are polar, ionic, or have polar or ionic regions in their molecules. This allows for water to be a wonderful biological medium in cells. Dissolving many substances readily makes for easy transportation of substances within cells and between cells. This property allows plants to acquire nutrients effectively through water intake.