Questioning the Accuracy of War Images: John Trumbull's Paintings of the American Revolution and Photographs from the American Civil War

Photographs of the Civil War

"Verbal representations of such places, or scenes, may or may not have the merit of accuracy, but photographic presentment of them will be accepted by posterity with an undoubting faith." 25 –Alexander Gardner 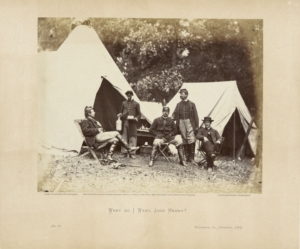 Photography was in its relative infancy at the outbreak of The Civil War. What we consider to be the first true photograph was created in 1826 in Paris by Joseph Niécpe. In 1839 Louis Daguerre invented the daguerreotype which was the most popular process for creating a photographic likeness. Daguerreotypes are images printed on a piece of silver. Daguerreotypes produce a single image that can't be reproduced, while the wet plate process allows unlimited copies to be made. 26

Matthew Brady learned the daguerreotype method from Samual Morse. Morse learned the method from Louis Daguerre. 27 When the Civil War began Brady knew it would be important to record the events. He had to obtain permission from the Federal Government to be allowed to photograph the battles. 28 "With the outbreak of the Civil War, Brady devoted himself to its documentations, hiring teams of photographic "operators," including Alexander Gardner, Timothy O'Sullivan, and John Reekie, whose photographs, in line with standard studio practice, were usually credited to him (Brady). Brady's expectation that he would sell these photographs, and those purchased from freelancers, as historical records of the war, failed to be realized, as people wished to forget the trauma of the conflict." "The idea of photographing a war in all its phases was a daring innovation: no such enterprise had ever been undertaken before and it entailed unknown dangers and hardships." 29

Gardner and Brady both used the wet–plate or wet collodion process and the albumen print. "Although the need for the plate to be prepared and developed when used was a major drawback to the wet collodion method (as is necessitated ready access to cumbersome apparatus including a portable darkroom, processing equipment, chemicals, water, and a supply of prepared glass plates that had to be kept perfectly damp), such difficulties were justified by the greater sensitivity of the emulsion, which reduced exposure time to under one second and produced a sharp easily reproducible negative." 30

Albumen prints are made by coating printing paper with salted egg white. The paper is then soaked in a silver nitrate solution, which makes the paper light sensitive. 31 This entire process had to be done in the field under less–than–desirable conditions.

"Brady had a crew of some 15 photographers at the battlefield. They moved about in a cumbersome van that the soldiers call a "what–is–it wagon," which the photographers used for on–the–spot developing of their negatives." 32

"Gardner wanted a by–line on his photographs; Brady, who directed the operations, said no." Gardner left Brady and continued to photograph the war. Timothy O'Sullivan also began his career working for Brady. When Gardner left Brady, O'Sullivan went with Gardner as his assistant. "Gardner's Photographic Sketch Book of the War", includes 45 photos by O'Sullivan. 33

"Gardner [like Brady] shot few of the pictures himself; he usually set up the scene and gave directions, leaving the actual photographing to the staff he assembled – to whom he gave the credit that Brady had denied him. He did, however, process the pictures. 34

Of Brady's photos, only four show actual battle scenes. The collodion process required the subject to be very still. The gear was large and required time to move and set up. "He could photograph the dead, where they fell or where they had been assembled, but it would seen that, in all save a very few instances, he was confined to photographing dead rebels." 35 Because the photographers couldn't take many photographs of the actual battles, most of the photos were of either soldiers in their camps before battles or dead bodies after the battles. It was later discovered that some of the photographers would move the bodies to make the photographs appear more interesting. In the photograph by Alexander Gardner, Home of a Rebel Sharpshooter , Gardner and his assistant moved a body to lie beside a stone wall and then placed a rifle near the body. 36 George Barnard's photograph, Rebel Works in Front of Atlanta, 1864–65 was a compilation of two negatives. 37

Brady amassed thousands of negatives. Interestingly, at the end of the war Brady was impoverished. "There was little market for his war pictures – the war was too recent and too horrible, and no one wanted to be reminded of it." 38 "There was no ready–made market for his (Brady's) work, for the popular weekly newspapers had no means of reproducing his negatives." 39 The first half–tone photograph was not published in a newspaper until 1880. 40

The negatives eventually became the property of the library of congress. In 1907, Edward Eaton published a book with these negatives, "Original Photographs Taken on the Battlefield During the Civil War of the United States by Matthew B. Brady and Alexander Gardner, who operated under the Authority of the War Department and the Protection of the Secret Service", with over 200 photographs. 41