Questioning the Accuracy of War Images: John Trumbull's Paintings of the American Revolution and Photographs from the American Civil War

The works of John Trumbull

"Our visual conception of the events surrounding the birth of this republic are due to the documentation of a certain Connecticut Yankee." 4 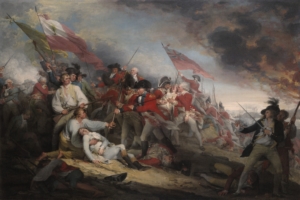 John Trumbull was a Connecticut–born artist who came to be known as the "first professional artist in America with a college degree." 5 Born in Lebanon, Connecticut to an upper–class New England family, John was the son of Jonathon Trumbull, Sr., who was a colonial and revolutionary Governor of Connecticut. 6 Trumbull enrolled at Harvard in 1772 because his parents were not supportive of his training to be an artist. 7 His father wanted him to pursue a career in law or ministry. 8

While Trumbull was in Cambridge, he visited John Singleton Copley, the pre–eminent Boston artist of the time. Copley not only made a living as an artist, he was quite affluent. This impressed Trumbull. 9 Trumbull studied the paintings that hung on the walls of Harvard as well as the paintings of Copley. 10

In July of 1780, Trumbull went to London to study with the American expatriate Benjamin West who had achieved success in the British capital. While he was there he also met Gilbert Stuart. In London, and at the urging of West, Trumbull decided to concentrate his works on historical painting. 11 Historical paintings based on classical ideals were characteristic of the Neoclassical period in Europe in the late 18 th century. These paintings were popular in the Royal Academy in London and in the salons of France.

Trumbull was influenced by Copley, West, Stuart and the academy painters he saw in London. "Death scenes proliferated on academy and salon walls, and one classically draped hero after another fell back into the arms of aids and comrades in poses that were meant to evoke memories and emotions associated with paintings of Pietas, Lamentations, Depositions, and Entombments." 12 Trumbull admired these works and clearly drew on them for inspiration. He admired the values these paintings espoused.

"Trumbull saw the recent war as opening a new field in America for history painting and portraiture." 13 Both John Adams, who was also in London and Thomas Jefferson, who was in Paris also encouraged Trumbull to paint the series from the Revolution. 14 The Battle of Lexington on April 18, 1775 was the beginning of the Revolutionary War. The colonists were at battle with the British troops. Trumbull enlisted as an adjutant of the First Regiment of Gen. Joseph Spencer. He served in the Boston area and on June 17, 1775 witnessed the Battle of Bunker's Hill from across the bay. 15 Bunker's Hill was a two and half hour battle on a clear summer day. The actual battle took place on Breed's Hill in the Charleston area of Boston. The battle is called the Battle of Bunker's Hill because that was the intended hill for the colonial fortification. 16 The battle ended in defeat for the colonials, but the English suffered over a thousand causalities, including many officers. Even though it was a loss, the battle did prove that the poorly dressed, ill–equipped colonials were ready to fight. "It was deemed a battle of which the nation could be proud." 17

Trumbull never intended Bunker's Hill to be an accurate, eyewitness account of the battle or of the death of General Warren. As art historian Irma Jaffe explains,"Roger de Piles, whose Cours de Peinture par Principes Trumbull and, it is safe to say, every artist of the period read, held that there were three kinds of truth: simple truth or the appearance of things; ideal truth, consisting of a selective combination of various beautiful parts; and perfect truth, composed of simple and ideal truth, which 'carries so beautiful a probability as often appears to be more true than truth itself.' This theory allowed painting the license it needed to compete with poetry as a liberal art." 18

Even though the Americans lost the battle, Trumbull wanted to depict the behavior and honor of the participants. Trumbull said, "The attempt by the fiendish looking grenadier to plunge a bayonet into the fallen general was a pictorial liberty – analogous to the licentia poetae. He did not know that any such occurrence took place – but the scene was introduced to afford an opportunity to do honor to Col. [sic] Small who arrests the thrust of the grenadier. Col. Small was distinguished for his humanity and kindness to American prisoners and therefore he was made by the artist to do a deed of mercy." 19

"In 1831, distraught over the financial uncertainty that had plagued his entire life as an artist, Trumbull sold many of his works to Yale College in return for an annuity of $1,000 a year. As Trumbull reasoned,

I thought first of Harvard College, my alma mater, but she was rich, and amply endowed. I then thought of Yale – although not my alma, yet she was within my native state and poor.

Through his bequest, Trumbull established at Yale the first college art gallery in America. In 1837, at the age of 80 he began work on his autobiography, which would become the first written by an American artist." 20 Technically, the paintings were not sold to Yale; they were deeded in exchange for $1,000. It was because of this exchange that the University began its collection.

Trumbull designed the building which would house the paintings. "The building included skylights for each gallery and slits in the floor 12 feet by 15 inches wide that would be used to lower the paintings to the first floor for removal in case of a fire." 21 The gallery opened in 1832. When Yale's collection became so large that an additional building was required, the collection was moved and the Trumbull gallery was used as office for the university president and treasurer. The building was later demolished in 1901. 22

Trumbull wanted to remain near his paintings that he referred to as "his children" in perpetuity. 23 John and his wife Sarah are interred in a tomb below the gallery. Each time the gallery has moved into a new building the couples' remains are reinterred. "Yale has carefully respected (Trumbull's) wish to lie beneath that gallery where his pictures hang, although this was not stipulated in the indenture. The University has also abided by the provision that said painting shall never be sold, alienated, divided, or dispersed but shall be always kept together". 24 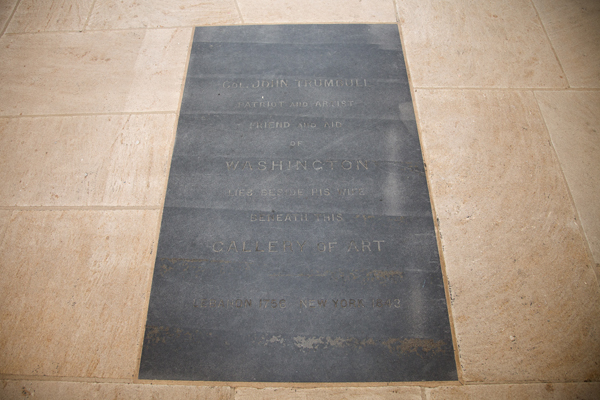