Almost a Citizen: A History of Social Injustice in America

The texts for this unit will mostly derive from historical and literary texts. Because students often struggle with chronology ranging from slavery to the Civil Rights Movement, resources establishing the historical context will be provided as a supplement to all cases covered in class. The goal is for students to analyze historical instances of social injustice, more specifically, violations of due process provided under the law. 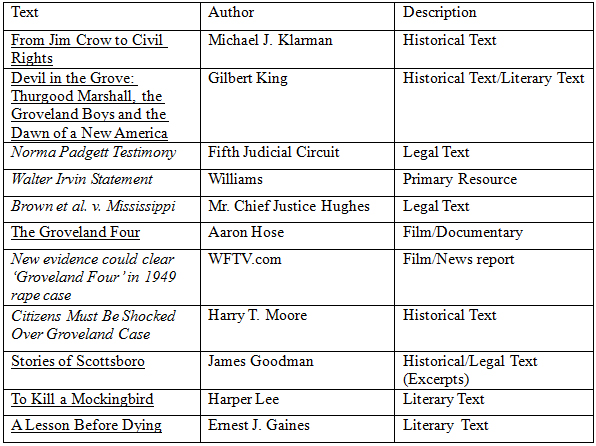 Although two literary texts are provided, only one literary text would serve as the anchor text for the class. It would be required that students read the literary chapters assigned independently and compose a reaction based on their immediate thoughts or questions regarding the reading. In class, a lesson including the historical text relevant to the reading is conducted in the form of a mini-lesson. The goal is for students to engage in a discussion and formulate connections between the conditions of that time and the literary text.

So that students can begin to build background knowledge and explore social injustice during the Jim Crow Era on many levels, a pre-test is conducted to identify the areas that need development. The pre-test would demonstrate to students that although they have been introduced to the hardships that African Americans have suffered during the Jim Crow Era, there is much more to be learned about the experience of blacks during this time period. In addition, pre-, during and after reading activities, discussions and reflective writings will take place. The list of texts above will provide a much needed foundation for the subject of social injustice during the Jim Crow Era. Ultimately, the expected outcome is for students to participate in a Supreme Court Moot Court Activity. This unit would be best implemented in a classroom setting where a culture of respect and tolerance has been established, as well as a reading/seminar setting. The teacher must conduct mini-lessons before allowing students to participate in student-centered discussion about the subject of the texts, because historical context is essential to the success of this unit.