The Earth’s Greenhouse and Global Warming

The Sun serves as the primary energy source for Earth’s climate. Some of the incoming sunlight is reflected directly back into space, especially by bright surfaces such as ice and clouds, and the rest is absorbed by the surface and the atmosphere. Much of this absorbed solar energy is re-emitted as heat (longwave or infrared radiation). The “greenhouse” in the atmosphere in turn absorbs and re-radiates this heat, although some of which escapes to space. Any disturbance to this balance of incoming and outgoing energy will affect the climate on Earth.

If all heat energy emitted from the surface passed through the atmosphere directly into space, Earth’s average surface temperature would be tens of degrees colder than today.

The gases nitrogen and oxygen that make up the bulk of the atmosphere neither absorb nor emit thermal radiation. Certain gases in the atmosphere block that heat from escaping into space. These gases are greenhouse gases.

Water vapor, carbon dioxide and some other gases present in the atmosphere in much smaller quantities than oxygen and nitrogen, absorb some of the thermal radiation that leave the surface, and act as a partial blanket for this radiation. That causes the difference of 21oC or so between the actual average surface temperature on the Earth of about 15 oC and the figure of -6 oC which applies when the atmosphere contains nitrogen and oxygen only. This trapping of heat is the natural greenhouse effect and the gases are known as greenhouse gases. It is ‘natural’ because all the atmospheric gases (apart from the chlorofluorocarbons - CFCs) were there long before human beings came on the scene. The enhanced greenhouse effect, or global warming, is the added effect caused by the gases present in the atmosphere due to human activities such as the burning of fossil fuels and deforestation [1].

Greenhouse gases in the atmosphere, including water vapor, carbon dioxide, methane, and nitrous oxide, act to make the surface much warmer than this because they absorb and emit heat energy in all directions (including downwards), keeping Earth’s surface and lower atmosphere warm (Figure 1). Without this greenhouse effect, life as we know it could not have evolved on our planet. Adding more greenhouse gases to the atmosphere makes it even more effective at preventing heat from escaping into space. When the energy leaving is less than the energy entering, Earth warms until a new balance is established [1]. 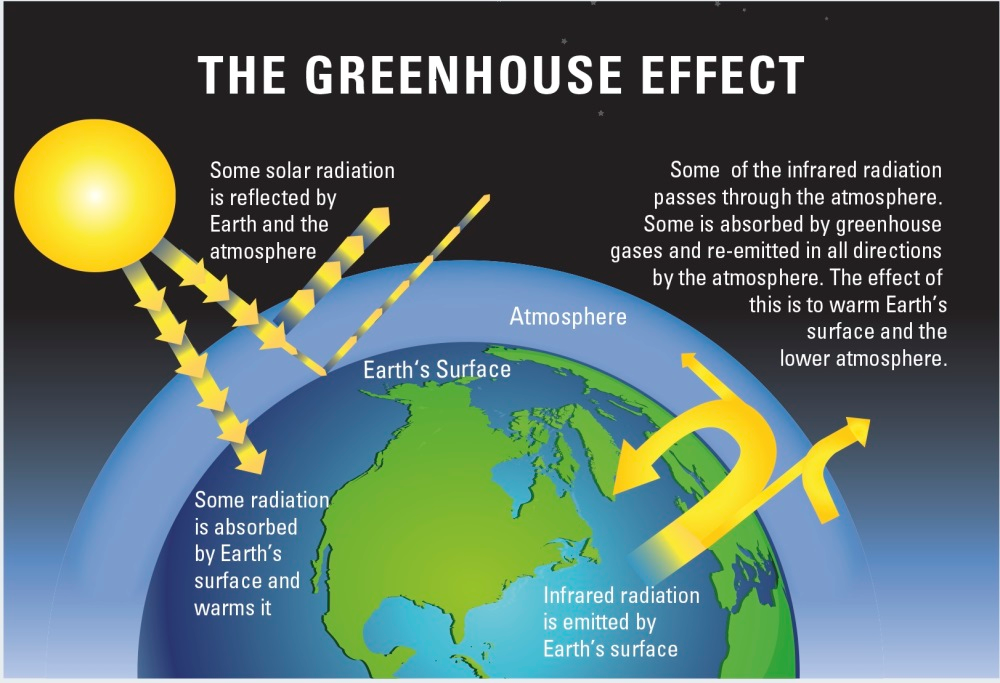 By trapping more energy, greenhouse gases emitted by human activities alter Earth’s energy balance and therefore, its climate. Humans also affect climate by changing the nature of the land surfaces (for example by clearing forests for farming) and through the emission of pollutants that affect the amount and type of particles in the atmosphere. Scientists have determined that, when all human and natural factors are considered, Earth’s climate balance has warmed, with the biggest contributor being increases in carbon dioxide.

This unit will include an overview of the three main greenhouse gases (carbon dioxide, methane and nitrous oxide). The unit will be a mix of organic and inorganic chemistry and will describe the physical and chemical properties of the three main gases and the most important chemical reactions that move the greenhouse gases into and out of the atmosphere. The unit will include a chapter of chemical reactivity, how these gases work (by atmospheric absorption and scattering of electromagnetic waves at different wavelengths), their residence time in the atmosphere and analyze the mitigation (what humans can do to reduce or limit the concentration of greenhouse gases in the atmosphere).

One section of the unit will discuss the “global warming potential” (what makes a stronger or a weaker greenhouse gas) and the relationship between physical properties of greenhouse gases and their lifetime (how long they remain in the atmosphere).