When Will We Ever Use This? Predicting Using Graphs

Students in Algebra I still have difficulty understanding the Cartesian coordinate system. When looking at a point (x,y), I remind them to remember what comes first in the alphabet is the first letter. That is x comes before y in the alphabet, so when they see an ordered pair, they should write the letter x above the first coordinate. Y comes after x so it is the second part of the coordinate. Again, writing the letter y above the second coordinate will reinforce this convention. The practice that x is plotted on the horizontal axis and y on the vertical axis is somewhat more difficult to remember. However, I found an exercise that is part of the Algebra Lab curriculum in New Haven District and adapted it to help the students (www.ti.education.com). The exercise also helps in seeing how changing one coordinate may change the position of the point.

Objective: Students will be able to plot x and y coordinates of points and identify effects of change in x and y values. The exercise may be done with computer software or a graphing calculator or on paper

Instructions for a TI Graphing calculator

3. Press the Graph key and the graph will appear.
If the graph does not appear, check to make sure the window is correct. The standard window may be created by pressing zoom, then 6 key. Only the first quadrant is shown in the following chart. Quadrants are numbered counter- clockwise. 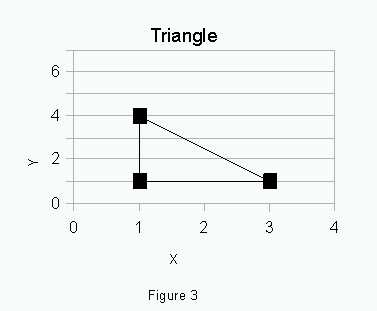 These are the different exercises students :

The students are encouraged to work in pairs. Through experimentation, the students should figure out what changes to the x or y coordinates make the desired change.

I also use a teacher’s calculator connected to view a screen which allows the graph to be display on the white board or a large piece of paper. This allows the students to see where the triangle had been before they began making changes to the coordinates. Multiple lists also may be used to keep several figures graphed on the same coordinate plane.

Which variable is the independent and which is the dependent? Students think that the independent variable is always plotted on the x axis, since this it is taught in the science curriculum. However, it is important from a mathematical perspective for them to understand that choosing the x variable is important in the context of how the problem is presented. The question of causality becomes the key factor. This concept seems to be one of the more difficult ones for the Algebra I students to comprehend, especially when the exercise is presented as a word problem. This is a discussion activity.

Examples 1: Juan receives $ 20 from his Grandmother for his birthday. The card says that he will be receiving an additional $ 5 for each month. How much money will Juan have received from his grandmother in two years?

Example 2: Jane has a steady babysitting job where she makes $ 6.50 an hour. How many hours must she work to make enough money to buy the new iPod she wants?

Example 3: A vacation trip has been planned and the Smith family would like to get to keep their gas budget reasonable. How much will they spend on gas if gas is $ 4.28 and their car gets 20 miles to the gal?

Students should be encouraged to consider if the relationship makes sense.Time series data such as time passes, the money that is deposited in a savings bank increases in amount based on the interest rate paid and has a positive correlation. This is a reasonable example of a linear relationship.

An exercise that would be fun for the students to do is to determine if the size of a persons head or length of their arm or foot is related to how far they can jump. (McDougall Littel, Algebra I).

The students will then graph their results on paper. They will then draw in a line of best fit, by eye, where the number of points below the line are about the same number as above the line and that the points are the same distance from the line drawn. They will discuss which of the three independent variables was the best predictor of length of jump. The students could be introduced to interpolation by asking how far a student with a head size falling between two values might jump.

Once the graphs are created and the lines are drawn in, the students can determine the equation of the line. The easiest equation is the slope intercept form, Y = mx + b , where m is the slope, and b is the y intercept. If they extend the line through the y axis, they will approximate the y value, when x equals zero (the Y intercept). Then they should pick two points that are on the intersection of the grid lines and use the points to calculate slope (y2-y1/x2-x1). They can then use their equation to predict points beyond the scope of their data. Ask them how far it is reasonable to extrapolate.

On the graph, figure 4, it appears that Hewlett Packard’s stock price will continue to rise. However, the complete graph, figure 5, shows that it goes down and then levels off.

On the graph, figure 6, it appears that Citigroup’s stock price is slightly increasing. The complete graph, figure 7, shows that the price in fact went down significantly.

On the graph, figure 8, it appears that Apple’s stock price rises nicely then has a downturn. A prediction of that the down turn will continue would be appropriate, but the stock actually recovers and increases in price as shown on figure 9.

Sirius’ stock price appears to be trending down in figure 10. An appropriate prediction would be that this trend continues. As the graph in figure 11 shows, Sirius stock price continues to trend downward.

This exercise will combine research with the excitement of making some money. First the students will pick some companies that interest them. They should determine, based on what they know or which companies had the biggest increase in stock price over the past month. They will be required to write down in a paragraph what their reasons are for believing this. Afterwards, they will record the stock prices, using the end of day prices. Their graph will have days on the x axis and stock price on the y axis. They will then plot the points and create a line of best fit. Using their line of best fit they will predict how their best stock will do in a week. Included should be a graph of the most appropriate major indicator, such as Dow Jones average for comparison.

What other factors may have an impact? Is the past a clear predictor for the future price where stocks are concerned? The last relation is whether there is a correlation between the price of the stock and how much money the company is making. Some of the Fortune 100 companies should be compared against smaller companies. What are their results?

In addition, the students should compare their results with what some of the experts have predicted. A quick check as to stock prices before and after any large fall in the stock market such as October 1987 and in 1929 could provide a good historical perspective.

Even if the students continue to say “when will we ever use this?”, they will be a step closer to being able to use math to make better decisions and make more money!