Obviously the size of an animal depends on the size of its bones, and vice versa. Large animals such as elephants have longer, thicker, stronger leg bones to support their incredible weight. Flying animals such as birds rely on porous or hollow thin bones to keep them in the air. The same bone can look very different in different animal species, such as the femur, which can vary from 80 centimeters in an elephant to 5 centimeters in a cat. While humans have 12 pairs of ribs, a two–toed sloth has 24 pairs, and a python has 400 pairs! While in many animals the ribs are separate entities, in a turtle the ribs fuse together to make their shell. 23 And, even though a giraffe's neck is far longer than that of a man, both species contain the same seven bones in their neck. 24

Below I have outlined information on a number of different vertebrates. However, depending on your students' interests and background knowledge, you might choose to research others to present in class. Some interesting comparisons might be made between sharks and bony fish, as well as among the pterosaur, bird, and bat. I attempted to present examples of vertebrates from the different animal kingdoms, but feel free to adapt your lessons using animals of your choice, and of course always seek out more information! The information below is mainly constrained to the skeletal characteristics that affect movement and eating habits in these animals. 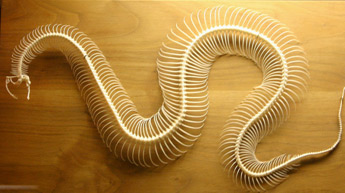 The snake skeleton is primarily made up of vertebrae and ribs. http://en.wikipedia.org/wiki/File:Snake_skeleton.jpg

Snakes are reptiles that may live on land or in water. The snake's skeleton is different from most other vertebrates in that it does not have any appendages. It is made up primarily of the skull, vertebrae (up to 500!), and ribs, which are connected to the vertebrae. Attached muscles allow for snakes to move prey they have swallowed down their bodies and also to move in a variety of ways, slithering, swimming, hurling themselves across sand, and looping themselves to climb trees. Some snakes, such as boas and pythons, do have remnants of pelvic bones. One important bone in the snake's skeleton is the columella, a small bone in the ear, which the snake uses to "hear" vibrations through the ground. Snakes have also adapted a special type of jaw, made up of bones connected by elastic ligaments so that they may eat prey larger than themselves. The jaw is also attached in such a way that it may open very wide, and then move laterally to allow for the prey to pass through it, then "walk" its prey through its mouth as it swallows. 25

Snakes also have specially adapted teeth depending on the way they hunt and kill their prey. Constricting snakes (such as the Burmese python) are aglyphous , meaning their teeth are not specialized and all have a similar shape and size. They do not have fangs through which to deliver venom, and are therefore non–poisonous. Opisthoglyphous snakes (such as a hognose snake) are "rear–fanged", and have fangs in the back of their mouths that inject venom into their prey. Proteroglyphous snakes (such as king cobras) are the most poisonous, delivering their venom through one large fang towards the front of their mouths. These snakes do not have many other teeth in the front of their mouths, but must hold onto their prey for a number of seconds to fully inject their venom. Finally, the solenoglyphous snakes, which are vipers (including the rattlesnake), deliver venom through two fangs that curve backward and efficiently hook into prey to inject large amounts of venom deep inside. 26 Snakes' teeth are adapted to curve backwards and help them swallow their prey, hooking onto their prey and stopping it from escaping. Some of their teeth grow back when lost (often while feeding) while others are permanently attached to the bone. 27

Sharks are cartilaginous fish that live mostly in salt water. They are missing the swim bladder possessed by most other fish to create buoyancy, but make up for this deficiency through a massive liver and a skeleton made up of cartilage rather than bone. As discussed earlier, cartilage is strong but lightweight and flexible. Where the shark needs extra support, as in its backbone and jaws, the cartilage is "calcified", making it stronger and more similar to bone but still keeping it lightweight. 28 Sharks do not have rib cages, and can be crushed by their own weight when out of water 29 .

Like snakes, most modern sharks have jaws that can swing down and open to swallow large prey (which they break into smaller pieces but do not actually chew before swallowing). They also have specialized (and replaceable) teeth depending on their diet. Some sharks have dense, flat teeth perfect for crushing crustaceans and mollusks, while others have needle–shaped teeth to grip onto fish. Sharks that eat larger prey such as mammals have serrated upper teeth to cut and pointed lower teeth to grip their prey. Finally, sharks that feed on plankton and do not need to chew have small, non–functional teeth. 30 In some cases you can even predict the size of a shark based on the length of its teeth 31 !

Aside from possessing cartilaginous rather than bony skeletons, other differences between sharks and most bony fish include the fact that sharks can only swim forwards while other fish can swim both forwards and backwards, sharks do not have covers over their gill slits, sharks' eggs are fertilized inside of the female's body rather than in the water, and sharks' scales are rough and sandpaper–like rather than slippery and overlapping. 32

The elephant is the largest land mammal currently in existence. In order to support its extreme size and weight, its skeleton accounts for 16.5 percent of its total body weight. It has a massive, barrel shaped rib cage with 20 ribs, and a large percent of its bone mass is made up of spongy bone to provide support without adding weight. Its vertebrae are flat, which help to support its head and tusks. Unlike many other vertebrates, elephants do not have collarbones but instead have large shoulder blades. While generally similar, the Asian and African elephants do have skeletal variations, as do the male and females of each species. 33

Pterosaurs were the first animals to evolve with the ability to fly. Though not actually dinosaurs, they existed around the same time as dinosaurs and were also prehistoric reptiles 34 . Like birds (which had not yet evolved!), they had hollow bones to allow for flight, but more similarly to reptiles they had jaws and often teeth as well, depending on what they ate 35 . Pterosaur wings were unique in that they usually attached to the hind as well as front limbs (connected to an extended fourth finger in the front). They were made up of a membrane as well as muscles, skin, blood vessels, and stiffening fibers 36 . Like other reptiles, they laid eggs, which had to incubate for a number of weeks rather than days, and evidence suggests that they were able to walk and fly almost immediately after hatching 37 ! Most pterosaurs appear to have eaten fish or other water–based creatures. Research also suggests that pterosaurs may have been quadrupeds, staying erect when necessary using their back legs and fingertips 38 .

Birds "are feathered, winged, bipedal, endothermic (warm–blooded), egg–laying, vertebrate animals" 39 . Related to the pterosaurs described above, they evolved around 160 million years ago, during the Jurassic period. However, modern birds no longer have teeth, fur, or claws on their wings, and their hind limbs are not attached to their wings. They are known for their ability to fly, although of course there are species of flightless birds, including the penguin. Birds have hollow bones and strong chest muscles to allow for flight. Unlike other vertebrates, they have a keeled sternum, which supports the chest muscles. They also have fewer bones than other animals because many of their bones are fused together to provide a more rigid structure, but more vertebrate to help their neck flexibility for grooming and acquiring food. 40 They do not have teeth, but can use their beaks to break up their food and then swallow the pieces without chewing.

Bats are the only flying mammals. Like other mammals, they have fur, give birth to live young, and feed their babies milk. They have many of the same skeletal structures as other mammals (including humans!) but are not equipped to walk easily. Some bats, called microchiropterans , are carnivorous, eating mainly insects or small animals to survive, while megachiropterans feed on fruit and nectar 41 . The difference between these bats is seen in their skulls, which are either short and blunt (insectivores) or longer and narrower (nectar eaters) 42 .

Unlike birds, bats have marrow–filled instead of air–filled bones. To allow for flight, their bones are lightweight, small, and flexible. When bats "flap their wings", they are actually moving their fingers, which are attached by a thin membrane, rather than their entire forearms as with birds 43 . The muscles in a bat's wing are extremely efficient and require little effort to maneuver. In order to sleep hanging upside down, bats have toe claws on their hind legs that lock in place with the help of a tendon 44 .

Students might be interested to know about the following facts. You might even frame them as a question and answer game, and have students make predictions based on the knowledge they have learned throughout the unit.