The skeleton is the hard part of our body that provides its structure, protects our vital organs, and allows us to move in many complex ways. In animals, the skeletal system can be found either inside the body (called an endoskeleton) or outside of the body (called an exoskeleton). Animals with external skeletons or non–bony skeletons are called invertebrates (insects being the most common example), and most animals with internal bone structures are called vertebrates. The skeleton is usually symmetrical across the body's midline. Skeletons can also provide sensory information to animals, transmitting vibrations that are used for hearing. And, in some bony fish, it can act as a flotation device that adjusts the animal's buoyancy so it can move at different depths in the ocean. 2

The first bone appeared in fish, around 400 million years ago. While it was mostly comprised of internal cartilage in the skin, it provided protection and mineral reserves for these animals 3 . Over time, it has evolved to create the complex structures seen in animals and humans today.

We can all feel the bones in our bodies, and many of us have had the chance to see x–rays to know what our bones actually look like. Some have even seen real bones preserved from human bodies! The human skeleton contains over 300 bones at birth, but we end up with 206 as adults as the cartilage hardens and some of the bones fuse together, including the bones of the skull. 4 Some cartilage remains, which we can feel in our ears and the soft end of our nose. The skeleton first begins its formation in the embryo at about 6 weeks post–conception. 5 It develops as cartilage, and then is later ossified, the process by which cartilage is replaced by bone. The bones continue to lengthen and harden, while the epiphyses, or heads of the bones, ossify last (looking at these epiphyses is a good way to guess someone's age!). Hormones dictate the growth and development of bone throughout later years into puberty, while hormonal imbalances can cause developmental disorders such as gigantism or dwarfism. Adequate intake of necessary vitamins and minerals, such as calcium, phosphate, and vitamins D, A, and C is crucial to bone development. 6

Bones are strong yet lightweight, and able to grow, be strengthened, and repair themselves throughout our lives. The outer layer of bones, or the periosteum, is a thin membrane containing blood vessels and nerves. Underneath this is a denser, hard layer of compact bone (what we're used to seeing). This layer is made up of curved layers of calcium phosphate and collagen protein fibers that work to support a body's weight efficiently. Calcium is a strong mineral that provides resistance to compression, while collagen allows for flexibility and resistance to tension. 7 The inside of bones, or spongy bone, is soft and springy. On the very inside is bone marrow. The red bone marrow produces most blood cells. 8 If a bone breaks, the blood cells around it act immediately to repair the bone, forming a clot while new bone cells grow and attach to each other and the original bone. 9

The human skeleton provides five major functions: support, storage, blood cell production, protection, and leverage. 10 Our skeletons provide our bodies' structure, without which we would be merely a pile of skin and organs. Our bones also store calcium, phosphates, and fat cells to maintain normal levels throughout our body. Furthermore, they work closely with the skeletal muscles to allow us to move in both large and more delicate ways.

Each bone contains a number of features that allow it to be easily identified, and also to give clues about its "owner", including his or her age, diet, exercise habits, and previous injuries. Bones are classified into groups such as "long bones," "short bones," "flat bones," and "irregular bones." They also have distinctive markings that show where the tendons and ligaments attach, or where blood vessels and nerves interact with them. 11

Different bones are crucial in protecting important organs: the skull protects the brain, eyes, and ears; the vertebrae protect the delicate nerves of the spinal cord, and the rib cage, spine, and sternum protect the lungs, hearts, and major blood vessels. 12 In fact, skulls have played an important role in evolution, allowing animals to develop larger brains than animals without skulls. 13 Bones can even adapt to current stresses and needs by replacing the minerals that make up the bones and reshaping the bones themselves. Bones that are not used become thinner and more brittle over time, while bones that are stressed or attached to hard–working muscles form new ridges and become thicker. 14 This has also taken place over time through evolution.

The place where two bones meet in the body is called a joint, or an articulation. Joints allow our bones to move in many different ways. Examples of joints are shoulders, elbows, wrists, hips, ankles, and knees. Joints allow bones to pivot, twist, rotate, hinge, or slide. While some joints are immovable or only slightly movable, many are freely movable. These are called synovial joints. The bones in these joints do not make contact with one another, but rather move with the help of articular cartilage that covers the heads of the bones, the synovial membrane, and synovial fluid that lubricates the joints. 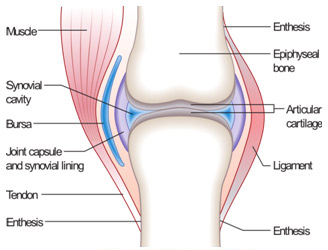 Diagram of a synovial joint http://en.wikipedia.org/wiki/File:Joint.png

Some important joints and their movements:

Ligaments, made up of collagen fibers, keep bones fastened together where they connect at the joints. Like rubber bands, they are able to stretch to allow for flexibility, but are also strong enough to provide stability. 16

Muscles work closely with our bones to facilitate voluntary movement as well as internal processes such as respiration and digestion. They connect to the bones to move them, maintain position, support soft tissues, aid digestion and elimination, and maintain body temperature 17 . They also control blood flowing through blood vessels and even keep your heart beating! Muscles are connected to bones by tendons, which are made up of collagen fibers. 18