This lesson is the culminating activity after the shared reading and analysis of community from The Sandwich Swap and Chester's Way.

The Sandwich Swap: This story is about two best friends named Lily and Salma who are from two different cultures. Each day both Lily and Salma joyously do everything together until one day they let the differences in their daily sandwiches come between them. Each day Lily eats a peanut butter and Jelly sandwich while Salma eats a humus and pita sandwich. Both girls feel sorry for one another for having to eat such yucky sandwiches and finally Lily tells Salma how she feels. This creates a division in their friendship and soon their classmates join in and take sides. The story ends with both girls coming together and realizing what a big mess they created over a difference. In the end they approach the school principal and work out a plan to bring their school community together for a cultural food party.

Chester's Way: Chester and Wilson are best friends and very much alike. Day in and day out they enjoy doing the very same things. A new and very unique girl named Lily moves into their neighborhood and tries many times to become their friend to no avail until she becomes useful to them by saving both Chester and Wilson from a group of bullies with her unique qualities as a weapon. The two boys finally accept Lily into their group and they all enjoy doing things together and soon discover that despite their differences they have much more in common.

The students will be able to be able to identify character traits displayed by each character in both The Sandwich Swap and Chester's Way in order to accept differences and to create community.

The students will identify their own personal traits which depict belonging to a variety of communities in order to create a classroom community gallery.

1. Review the previously read storyline of The Sandwich Swap and Chester's Way and discuss each character's personality traits and interests. Children may need support identifying specific traits. Model with a think aloud of character traits you noticed in the books. For example, since both Salma and Lily like to create art and would want to be described as artistic or as artists. You would then explain how they could belong to an art community. Each character will have many character traits which will put them in a variety of communities based on their actions in each book. Allow students to think-pair-share their ideas for several minutes in order to generate ideas. Guide the discussion and record information on the chart. Use the charts below to display the traits and the community for each trait. 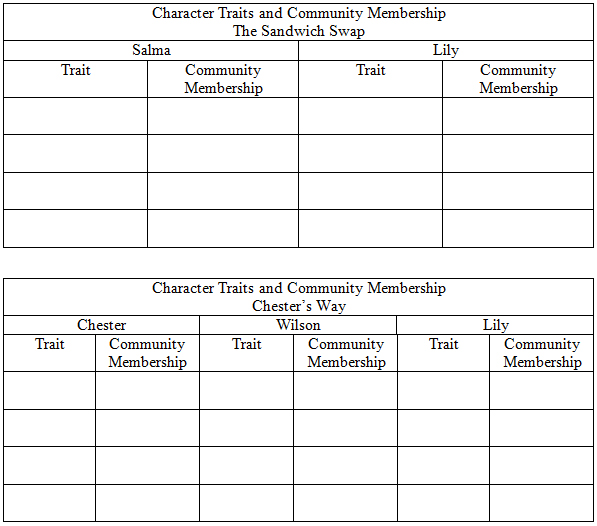 3. For a culminating activity of the lesson, give each student a blank paper doll image to decorate a unique image which represents themselves by using a wide variety of art materials and supplies as such as buttons, yarn, fabric, markers, etc. Once students have completed their image have them glue their paper doll image in the center of large construction paper and label with at least 6 character traits that represent their interests, heritage, and talents. Tell students to leave room because they may want to add to it throughout the year.

4. Post all images on a large bulletin board which will serve as a visual display to compare themselves to their classmates. This display will serve students in order to develop relationships based on common interests, experiences, and backgrounds. This bulletin board can be referred to and added to throughout the year.

Allow time for students to meet in common groups of their choice periodically to share and discuss ideas based on the specific community group. Students could create projects or provide support to one another. These scheduled interactions will support the development of content based vocabulary in an authentic environment. Students should be encouraged to alternate their groups in order to increase exposure to many communities. This would be a great activity for recess during inclement of weather or at the end of the day.

In order to celebrate diversity and bring the classroom community together, plan a cultural food festival for students and their families. Since I have students representing many Latino cultures who share one language, I would have a rice and beans party in order to expose students to the many recipes and varieties of two common ingredients which bring us together as a community.

At the end of the year have students create new paper doll images of themselves in order to compare how they have change over the year. Students can use their comparisons to write about the communities they belonged to throughout the year.