This unit will help students understand the scientific principles that affect water erosion and the subsequent creation of identifiable landforms.  Using a stream table, students will investigate how the rate of water flow as well as differences in sediment and vegetation impacts the rate of erosion and subsequent deposition of material.  The students will be immersed in scientific inquiry, observations, and experimentation to explore answers to the question “How does water change the land?”

The USGS (United States Geological Survey) defines a watershed as “an area of land that drains all the streams and rainfall to a common outlet such as the outflow of a reservoir, mouth of a bay, or any point along a stream channel. The watershed consists of surface water--lakes, streams, reservoirs, and wetlands--and all the underlying groundwater. Larger watersheds contain many smaller watersheds.” 5 Any point of land is a watershed, since as soon as a drop of water hits the ground, that water has to go somewhere.  When you think of the basic model of a water cycle where water comes down as precipitation, a watershed is any point on land on which that precipitation travels as it empties into the ocean or other large body of accumulated water.  A divide separates watersheds such as a ridge, where water will  flow to either side of that ridge.  “Temperature and rain patterns, underlying rock types, and topography (mountainous, hilly, flat) influence the structure of these watersheds and help to define the specific types of habitats available along the river continuum in each watershed.”  The USGS defines 78 major watersheds, or river basins, in the lower 48 states and 8 major watersheds in Connecticut. 1

The single greatest contributor to a watershed is precipitation in the form of rain or snow.  The amount of precipitation is a major factor of a stream's rate of flow.  Of course, not all precipitation reaches the ocean.  When water lands on dry ground, some of that water infiltrates the soil.  That water can be retained in the soil, or permeate the ground and collect in underground aquifers.  That water can travel short or great distances and remain in underground storage for up to thousands of years before it ever reaches the surface.  The type of soil influences how much water is absorbed.  Clay and rocky soil will absorb water at a lower rate than sandy soil.  Soil that absorbs more water will result in less runoff water, unless that soil is already saturated.  Some of the water is released through the process of evapotranspiration. Evapotranspiration is water that is released into the atmosphere through plant and soil. 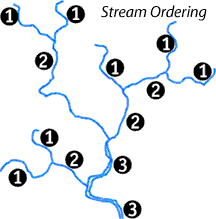