Women in Film: What are They Telling Us?

In addition to the male/female axis there is the black/white axis. Frequently, in the nineteenth century, the male was linked with the white, the female with the black. Hazel Carby, speaking of the nineteenth century, affirms this alignment: "White women who felt that caste was their protection aligned their interests with the patriarchal power that ultimately confined them." 23 The male/female and black/white axes became further linked through the related Victorian obsession with colonialism (Daily accounts of colonial wars in the newspapers were read with the same interest given football scores.) "the white man's burden" and repressed [female] sexuality. Thus, in his essay on "Feminism," as Doane points out, Freud repeatedly makes this link, using the term "dark continent" to signify female sexuality:

The dark continent trope is hence invoked in the context of a return to the motifs of castration, lack, and envy. A metonymic chain is constructed which links infantile sexuality, female sexuality, and racial otherness. For the adjective "dark" in dark continent signifies not only unknowability but blackness in its racial connotations. Africa is "dark" because its inhabitants are "dark." 24

Since a "proper" white woman could not be interested in sex, nineteenth–century "anthropology" made the link between the black woman and sex. The female Hotentot, highly sexed because of her biological aberrations her "enlarged buttocks" and her "distended labia" couldn't help herself. 25 Nor could the similarly equipped white prostitute, although, curiously, as a "female offender" lacking "proper maternal instincts," she was actually more a man than a woman!

This general link between whiteness and purity turns white skin into a mask of protection, a "moral aspect" in which "the ghosts are driven out." 26 Richard Dyer writes about the glorious brilliance yet unattainability of the ideal white woman. Whiteness becomes identified with bright ideas, good deeds, true beliefs, honest motives, honest women, pure feelings, or any of the other virtues which "ennobled the conquests, glories, triumphs and spoils of the Christian mission." This lofty perch of whiteness defined the white woman as the "apotheosis of desirability, all that a man would want." Of course, something so desirable, so noble, was something that could not be had. Nor, in fact, was it "anything that [a] woman can be." 27 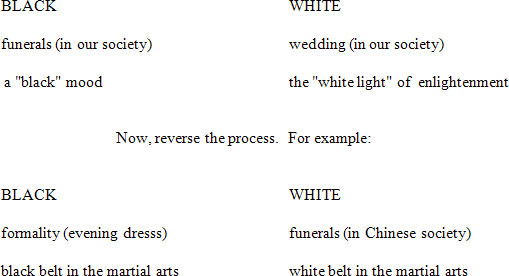 According to the rule of screen polarity, if we have whiteness and femaleness linked to purity, their opposites black and male must be highly sexed and dangerous. We begin to see blacks, particularly black males "persistently attributed with a hypersexuality." 28 In fact, we have all these themes conquering unknown lands, the colonialist's notion of "blackness," the unattainable white woman, the uncontainable black male sexual giant coming together, in a film about a man making a film in King Kong .

The myth of the "dangerous" and powerful black male becoming sexually involved with a white woman may well have contributed to the incredible fascination this country has with the O.J. Simpson trial. Would the trial be getting as much attention if the races of the defendant and victims were reversed?

If film tried to reconcile the male/female polarity through the metaphor of one person embodying the union of opposites in Tootsie (and in other popular cross–dressing films from Some Like It Hot to Victor, Victoria to Mrs. Doubtfire ), how can film attempt to reconcile the black/white polarity? We need to examine the recurring theme in film of the "tragic mulatto."

The tragic mulatto (or mulatta in films we will discuss) is "tragic" precisely because she is irresolvably caught between two different cultures. The tragic mulatta appears in film as early as The Debt (1912). In the Old South, a white man has a white son (from his white wife the "good woman") and a mulatta daughter (from his black mistress the "bad woman") at the same time. Needless to say, the son and the daughter fall in love, only to have their relationship revealed to them. Their lives are ruined because of their bloodlines not just because they are half–siblings but because of the inescapability of the daughter's black blood.

The white–seeming daughter's life being "ruined" by her dark–skinned mother is a theme that was to be repeated throughout the century. In Imitation of Life (1959) the confusion of the daughter her dogged determination to be white is dramatically revealed in the scene in which the mulatta daughter is asked to serve hors d'oeuvres to a visiting Italian movie director. Here we see a white actress (Susan Kohmer) playing a black (the daughter Sarah Jane) pretending to be a white (the object of her determination) pretending to be a black (with an exaggerated accent). 29

To Sarah Jane the contrast between her black and white halves is blatant and irreconcilable. The visual power of film clearly demonstrates this contrast in the scene at Sarah Jane's school. Doane describes the scene and its relation to the black/white axis:

In one of the earliest and most "melodramatic" instances of Sarah Jane's denial of her mother, Annie's discovery that Sarah Jane is passing at school, the placement of objects and colors calls attention to the depth of the image as sign, to the gap between foreground and background. As Annie climbs the steps to the school, a large red fire hydrant dominates the left front section of the frame, its color made more startling by the wet snow falling heavily. When Sarah Jane, traumatized by the sudden revelation of her racial identity, runs outside and is stopped by her mother, an imposing Christmas tree sign in bright red forms the backdrop as Annie gives Sarah Jane her red rubbers and helps her on with her coat.

Without the extreme polarization and hierarchization of whiteness in relation to blackness, passing would have no affective valence. 30

In the popular culture of this country the mulatta is a particularly powerful emblem. She is, after all, the innocent woman poised in the center of this country's most powerful, most historically significant cultural division, the innocent woman who literally embodies both the fear of this division and the hope of its resolution. As this emblem denies her own mother, she divorces herself as well from her own identity. Thus, in Flashdance (1983) Jennifer Beals is totally, and intentionally, separated from her roots. We never know where she comes from, although the film "shrewdly graces her with a white mother surrogate." 31

1. In the United States census form one is asked to choose one's race from a list of limited possibilities, such as black, white, Hispanic, Asian, native American, etc. There is no provision either for selecting more than one category or for selecting one called "mixed race." Is this right? Is this fair? What would be the consequences if these possibilities were added?

The themes of black/white and motherhood/career are united in Imitation of Life by the parallel pretenses of Sarah Jane and Lora. The former's denial of her own mother is paralleled by Lora's refusal of her own motherhood, choosing instead a career which, curiously enough, involves pretense. The only "whole" female in the film is Annie, in the tradition of the mammy, the nurturing black woman. She is the opposite of the selfish, materialistic and (professionally) pretentious white non–mother. In the original Imitation of Life (1934) Louise Beavers's Delilah tells her daughter Peola:

Bow your head. You got to learn to take it. Your pappy kept beating his fists against life all his days until it eat him through. 32

The comforting black woman (or comforting older i.e., not sexually threatening black man) has traditionally made it easy for white children to be comfortable around their black elders. Even with Shirley Temple outspoken and bossy around white grown–ups there was always a sense of easy equality and community when she was around "these black low–lifers." 33

1. To what extent has the alleged virtue of Christian stoicism for the oppressed black worker been hurtful to the causes of racial and economic equality?
2. Is it more "Christian" to suffer in silence or to rise up in protest?

1. Would Kathe Sandler have made this video documentary if she were not light–skinned?
2. Mention is made at the very beginning of the video, and several times thereafter, about the practice among African–Americans of choosing a mate on the basis of his/her skin color in order to control the skin color of the children. How prevalent would you say this practice is today?
3. In the documentary, women far more than men are held as "objects to be desired." Is this distinction still as strong today?