Alone the Trait Mate embodies the needed elements for characterization, as the parts work together cohesively to describe a character trait as seen above in Forgetful Fred. The symbol can be used as a visual tool to remember ways of describing a character, illustrating the character's thoughts (thought bubble), dialogue (speech bubble), actions (hands and feet), feelings (heart), and other character's reaction (little trait mates). Students will also learn that they can use the symbols to identify the parts of a story separately in their reading as an author describes a character by "showing" evidence of a character trait; then students can apply that skill to "show" or describe a character in their writing. As a whole unit, students can use the Trait Mate as a guide and fill in the parts with evidence in their text that describes a character's traits. The Trait Mate can be used to develop vocabulary and reinforce how the parts work together cohesively to describe a character. My students loved the activity of drawing the Trait Mate on chart paper and then describing the characteristics of each as we filled in each part of the characters Mean Mike, Forgetful Fred, Generous Gina, and Creative Carlos, which we then hung around the room. The Trait Mate can also be used for character building. Character traits can be sorted by their positive and negative qualities. How the other characters react in these instances shows the consequences of a character's actions.

The Trait Mate can also symbolize the structural components of a narrative--the character, setting, problem, events--when the hands and feet are labeled with " First", "Next", " Then", " Finally", showing the elaboration of events, and the star symbolizing the solution to a problem. (I was not able to write the words in the hand an feet for this drawing, but you can.) This visual summary can help students remember what to include when writing a story as well as the elements needed when summarizing a story for reading. However, for a summary, remove the dialogue symbol. As students use this symbol to think about narrative structure, the concept will be internalized and, they will ultimately include structural elements with automaticity in their writing.

Since students are expected to show elaboration of a character's thoughts, feelings, traits, dialogue and sensory detail in events of a story, the Trait Mate can be a visual thinking map for the elaboration of the character in each event of the story. The symbol can be used to easily differentiate elaboration by adding or removing parts of the Trait Mate for the specific needs of your students. Examples are above. The hands and feet a labeled with transitional words to show a sequence of events. Stress the use of these words to begin each event followed by an action. As students grow in their writing skill, developing events with specific detail, they will begin to use more complex transition language ("early one morning", "later that day", "as the sun set") to sequence each event. These phrases can be written in the Trait Mate in place of "first", "next", "then" and "finally." To visually express separate events, I ask students to skip a line between each event. 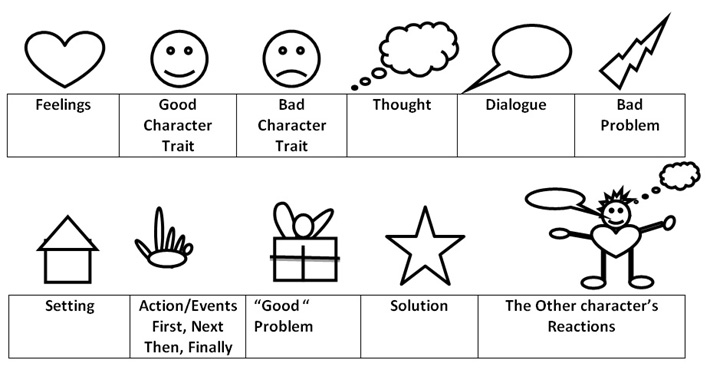 The Trait Mate symbols can be used separately as an excellent way to communicate needed revisions, directing students to elaborate specific ideas in their writing. Speaking in symbols is easy and clear. A thought bubble and a question mark would ask a student to think about what and why the character is thinking and then write it. The heart with a question mark would symbolize the need to think about how the character is feeling and why and then write it.

The Trait Mate symbols can also be used to reinforce the partnership of reading and writing by helping students study how other authors apply the elements in their stories. This provides an opportunity for students to explicitly study how authors describe characters and elaborate events with character traits, actions, thoughts, feelings, and dialogue. Students can also see the variety of transitional words used in others writing. The Trait Mate symbols can be used separately to reinforce and identify narrative structure. Symbols for the character, setting, problem, solution, and transitional words ("First", "Next", "Then", "Finally") can be drawn on a sticky note then placed at each location of those times in the book. The symbols can reinforce reading comprehension skills as students identify stated or inferred thoughts, feelings, and character traits with symbols on sticky notes in the text. Have students bring their books to guided reading groups. This is an excellent form of assessment as what students write in these symbols will reflect their comprehension levels. This can be easy differentiated. One student can label a feeling with a heart, another may write the name of the feeling in the heart and another student could write the feeling with an explanation.

I designed the Trait Mate to be engaging and fun for students to use while supporting their thinking in a purposeful way. This visual language for writing expands and directs thinking, promotes creativity, stimulates ideas, and brings a creative structure and order to the whirlwind of thoughts when students are writing. With the use of the Trait Mate, I have seen how my students have grown as writers. They are more confident and move through the writing process more independently. Most importantly, they love to write!