Normally, the restaurant opened for business at 11:30 a.m.  Michael, however, went the extra mile on our student’s behalf.  He asked that we arrive at 10:00 a.m., affording students adequate time to converse with the head chef and cooking staff while taking in the overall ambience of the restaurant.

Note, Soul de Cuba is a quaint venue, accommodating approximately 25-adults maximum at a time.  Instructors whose class size reaches this capacity should be prepared to bring students to the restaurant unaccompanied by adult chaperones.  Students should be self-disciplined and well-behaved.  Accordingly, teachers must preliminarily set the tone.  (Students who prove to be behavioral concerns should not be permitted to participate in the excursion.  Arrangements, however, can be made for them to visit the restaurant with their families outside of school hours.  Establishing the tone in this manner helps students embrace that behavior and academics go hand-in-hand.)  On  May 4, 2016, select students ventured to the restaurant to experience Cuban cuisine and culture.

“When eating at the dinner table,” Alysha noted, “it is optional and polite for someone to make a toast. Should a person decide to do so, others at the table should lift up their glasses and say “ Salud! ” (to your health).  After that, everyone sips from their glasses in one accord, then places their glasses on the table.”  Her teammates chimed in, sharing everything from “appropriate utensil usage” to “following the lead of the elder before beginning one’s meal.”  Once again, students experienced cultural consciousness at its best, making substantive text-to-real-world connections.

“ Bienvenido,” Michael greeted as our class entered the restaurant.  “ Buenos dias, Señor Iamele, ” my students responded, bursting with smiles.  As the general manager directed his young patrons to their respective seats, they took in the ambience of the venue brimming with artifacts reflective of Cuban culture.  An overhead screen flashed images of Cuban citizens past and present conducting their lives in their homeland. The children were fascinated by the pictorial images.  Several asked questions about all they took in; Michael engagingly provided background details.  Some noted that several paintings were reflective of deities embraced in the Santeria tradition.  Michael affirmed their observations.  Impressively, much of what students had begun researching in class was revealed in the surroundings, and the children made immediate connections. 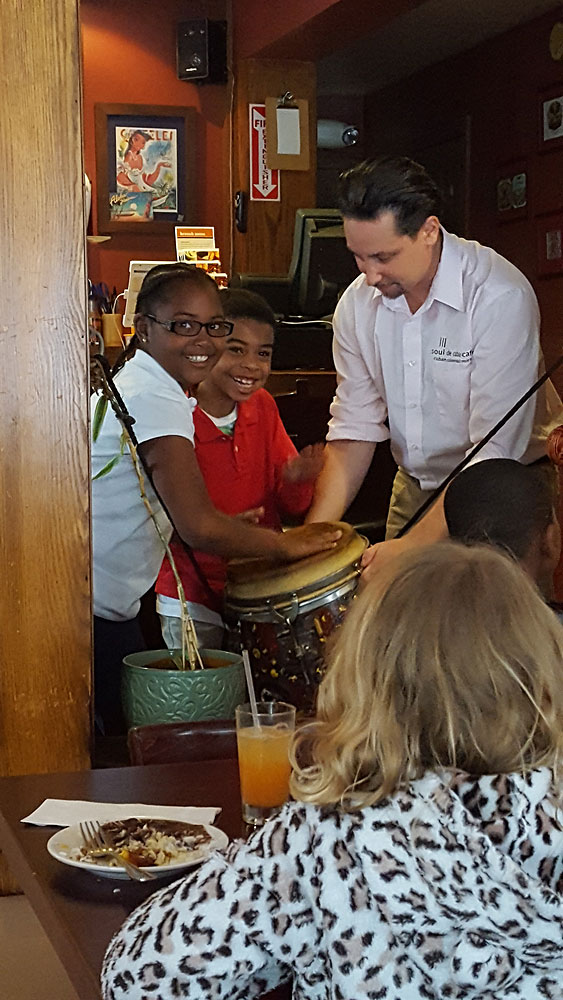 Of particular interest were the musical instruments.  As Salsa and Son rhythms played in the background, Michael noted, “Congas, claves, and maracas are very much a part of Cuban life.  They bring salsa — spice —to Cuban culture!”  He called on select students to take turns playing the instruments, and my students readily accepted the invitation.  The children—and Michael—had a blast!

Shortly thereafter, Head Chef Adis Romero emerged from the rear of the restaurant.  She made note of meals on the menu that were representative of traditional Cuban dishes cooked in the home.  Included on the children’s menu were picadillo (a savory ground beef stew laced with finely chopped tomatoes, onions, olives, bell peppers, capers, garlic) accompanied by frijoles negros y arroz blanco (black beans and white; plantanos maduras (sautéed plantains— a mildly sweet, banana-type fruit), and jugo de narranja, guava, y maracuya (delicious blend of orange, guava, and passion juice).  The meal culminated with flan , a sweet and creamy custard laced with a caramelized sauce.  Several students asked about how to make the delectable dishes. Chef Romero took a moment to discuss the ingredients for a few of her recipes. 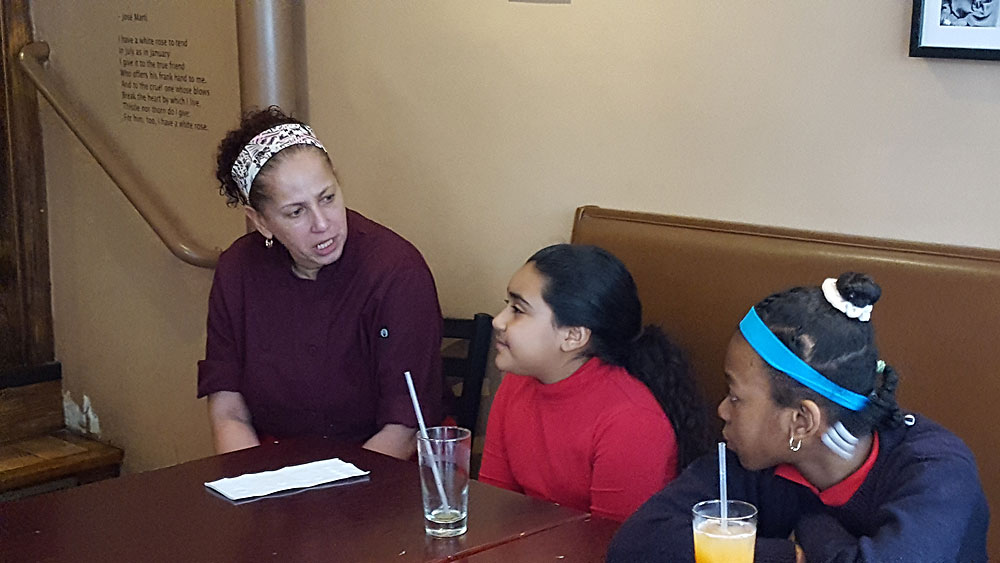 Lunch was to be served at 11:00 a.m., however, a few minutes before it was brought out, Chef Romero announced, “In Cuba, people enjoy dancing!”  Immediately thereafter, Michael blasted Cuban instrumental rhythms on vintage audio equipment. “ Ariba, ” Chef Romero exclaimed, signaling for the children to join in.  Following her lead, the children formed a conga line and boogied to the rhythm.  The restaurant was energized. “ Juepa! ” chants and laughter indicated all were enjoying the experience.  Shortly thereafter, Chef Romero returned to the rear of the restaurant.  The children clamored as the waiter poured beverages and served the meal.  Before digging into the banquet before them, Michael beckoned his patrons to lift their glasses: “A toast to learning about Cuba!” he exclaimed.  Everyone agreed, clicked drinking glasses, took a sip, and eagerly dove in!

By 12:30 p.m., we departed.  Upon returning to the classroom, we convened to discuss our morning excursion. The children indicated they were appreciative of having been able to interact with Michael and the Soul de Cuba staff.  Many made note of how music, dance, food, and dining together played an important part in human interaction.  They too inferred that people can be identified by their traditional foods and by the way they interact with one another.  Food & Wildlife team members Sydney, Niara, Jayana, and Amare concurred, adding that Cuban food, like Cuban people, is a blend of diverse cultures.  The four shared that during their research, they learned of another traditional Cuban meal known as Moros y Cristianos, a black bean and rice dish sold in paladares —restaurants owned by Cuban workers and/or families.  “That meal got its name based on wars that took place between dark-skinned Muslims from northern Africa called Mores and light-skinned Christians from Spain called Cristianos,” Niara asserted, emphasizing that the wars took place during Spain’s early history.  Jayana shared that although flan is often served in Cuba, her research revealed that the delicious dessert originated in Spain.  “No matter where it comes from,” she exclaimed, “I really enjoyed sampling flan!”

We had 50 minutes remaining to conduct in-class, team-project research.  Each member eagerly entered into their respective stations to collaborate on their select topics of study.

Have students interview family members to learn about select food creations passed down from generation to generation.  Students can record recipe ingredients along with the steps needed to make the select dish.  Recipe submissions can be compiled to create a “Delectable Diversity Cookbook.”  Take this activity a step further, and host a “Delectable Diversity Day Food-Sampling Celebration!”  With the assistance of Mom, Dad, or another committed and capable family member, have students create their family’s special dish, and bring it in for classroom sharing.  This event can be used as a social development piece to get diverse family members within your classroom to become acquainted with one another, while promoting parent involvement and student engagement.

Lesson 4. Identity: Reveal It Through the Arts!

Cuba’s history and ambience are depicted in a multitude of artistic forms.  The music is often steeped in a blend of African, Spanish, and indigenous rhythms.  The Son, which has a melodic bass that heralds patriotism and love, compels listeners to sway to the rhythm.  Grammy-award winning Celia Cruz brought Salsa—rich with conga beats, claves, and blaring trumpet accompaniments—to the forefront.  Two of her signature tunes, “ La Vida Es Una Carnivale ” and “ Azucar Negra ,” herald the soul of Cuban people.  “ La Vida ” emphasizes that despite inequities that befall us in life, life is worth living, so live it!  “ Azucar Negra ” accentuates the connection between sugar and the beauty and resilience of Afro-Cuban people. Machito, Mongo Santamaria, Emilio Estefan, and more brought Cuban sounds to world-renowned, award-winning status.  American,world-renowned trumpeter Dizzy Gillespie and along with other well-known jazz greats other frequented the island, infusing jazz with Afro- Cuban rhythms.

Great Cuban writers, such as revered freedom fighter, Jose Martí, heralded the love, strength, and beauty of his country and its disenfranchised people in poetic form.  Martí, is known for his poetic work, “ Cultivo Una Rosa Blanca ” (“I Cultivate The White Rose”).  A portion of this poem has been memorialized in the country’s folkloric song, “ Guantanamera .”

The visual arts are evidenced throughout Cuba.  Many Cuban artists like Jóse Rodriguez Fuster are resourceful, making use of recycled materials and available media to convey aspects of Cuban culture.  In this regards, encourage students to make use of Art options to convey an understanding of themselves in context with their communities.  Provide students with creative license to convey a depiction of themselves using any of the three approaches.

In Literature & Music :  Have students learn about the life of Jose Martí (visit http://www. biography.com/people/jos%C3%A9-mart%C3%AD-20703847).  Subsequently, have them read his poem, “I Cultivate A White Rose.”  Then, listen to the revered Cuban folksong, “Guantanamera.”  Make note of how the song incorporates a portion of Marti’s poetic verses into the melody, heralding Cuban views about class equality and economic and social freedom for the poor.  Using the poem and song as a springboard, have students consider social ills that plague their community and/or American society overall.  Have them create a poem and set the words to a melody to constructively address those societal ills (e.g., gun violence, bullying, racism…).  Their creative effort can serve as a mantra for positive change with which others within the school community and beyond can embrace and identify.

In the Visual Arts :  Some Cuban visual artists, like Jóse Rodriguez Fuster 10 ,  recycle ceramics, LP records, plastics, and other materials to create sustainable art. Their work is used to portray images of a people while physically enhancing the community. Their artistic creations convey empowering images with which the community can identify.  Using ceramic tiles, LP records, or plastic plates and assorted acrylic paints, have students paint a pictorial image of themselves, their family members, their neighborhood, and/or scenes that herald their identity.