Throughout the course of Professor Campbell’s seminar, I experimented with key aspects of the team research project:  I learned that timely planning is crucial in the effective implementation of this multifaceted research effort.  Parent involvement too is crucial, as student interaction will take place both within and beyond the classroom setting.  In this regards, notify parents of the project assignment and the need to assist in coordinating study dates for their children.  Provide them with team member phone numbers and E-mail addresses. Be aware that several parents will provide little or no assistance.  To counter this possibility, coordinate with your school Library Media Specialist to establish flexible research schedules.  Subsequently, have students visit the Library Media Center as needed.  Additionally, incorporate in-class and, where possible, after-school team study sessions into the schedule.  Doing so will help fill in the gap.

Thereafter, interface with the public library to borrow an ample supply of Cuba-related informational and fiction resources for classroom use.  Purchasing gently used books via Amazon.com serves as a viable complement and is also recommended.  Make use of either of these alternatives well in advance of unit implementation; order enough reading materials to accommodate students across needs and abilities levels.  Also provide a listing of student-friendly websites, along with team folders, graphic organizers, and notetaking forms for each team.  This will help facilitate the info-gathering process.

Next, have your students conduct a K-W-L brainstorming session, generating a listing of subject categories they want to investigate.  (During our trial run session, my students came up with topic combinations that included Music & Popular Life, Food & Wildlife, Language & Education, People & Communities, Customs & Community, Past History & Government, and Population, Economics, & Religion.)

Subsequently, have students assemble in groups of 3-4 by topics of interest. Set the bar high.  Inform students that when completing their report, they will write in the first person plural voice.  They too should collectively decide which aspects of their chosen topic will be presented by specific team members.  Remind students to refer back to the essential questions when conducting their research.  This will help give a sense of the persona of Cuban people.  Emphasize that although students are working as collaborative teams, each member will be evaluated based on his/her individual work effort.  Each team member will also be held accountable for effectively working both within and outside of the classroom.  (Share this information with parents, Library Media Specialist, and Public Library contacts to maintain consistency and uniformity.)  Provide each student with a checklist and 8-week pacing calendar.  Stress the importance of adhering to the schedule, a sample of which is indicated below:

Weeks 1-2. Visit the public library and/or convene in the school Library Media Center, working individually and/or with team members.  Pool together info, and take notes regarding select team topics of interest.  Gather a complementary assortment of 3” x 5”, 4” x 6”, and 5” x 7” pictorial images re: their topic of study.  (Provide folders for each student in which they will keep their gathered info.)

Week 3.  Compile information, organize notes, and begin developing first draft.  Think of ways in which gathered info can help us identify Cuban culture and its people.

Week 7.  Collaborate regarding the layout and design of the team project display.  Decide on presentation format (i.e., what participants will wear, model, demonstrate…).  Establish parts to be read by each team participant.  Practice reading respective parts fluently, with expression and poise.

Week 8.  Team Presentations.  Be prepared to collectively present your team project before classmates and/or invited guests.  Give it your best!

Throughout the preliminary research process, I was astonished by sophisticated discoveries made by student team members, among them, Savion, a beginning reader wise beyond his years.  Savion’s interest lay in studying Cuba’s past history and government.  While circulating the classroom to monitor small group discourse, I overheard him equate the tension-filled relationship between Cuba and the U.S. as being similar to three children in a squabble:  “ It’s like America and Cuba were friends.  America wanted to play a game, but Cuba didn’t want to, so America stopped playing.  Cuba didn’t have anyone to play with and did not like being alone.  Russia came along, and Cuba and Russia became friends. Cuba thought playing with Russia was better than being alone.  America learned that Russia and Cuba became friends. America told Cuba not to hang out with Russia, but Cuba said, “You can’t tell me what to do!” After that, America did not speak to Cuba for a long time.  Now that's messed up!"

What a phenomenal interpretation by an eight-year old!  Based on his research, Savion deemed Castro to be a compassionate leader.  “ He looked out for poor people ,” Savion shared.  In response to learning about the flight of middle class Cubans to Florida during the late 50s and beyond, Savion noted, “ If I owned something that I worked hard for, and someone made me give it up, I would be angry and leave too! I would also try to understand why a president would do that, so I would ask President Castro to explain why.” Savion’s thought processes made me smile:  perhaps we have a future diplomat in our midst.

During this trial-run segment, I once again learned that advanced planning is essential.  This time, I sought the assistance of entrepreneurs in our community familiar with Cuban dance forms.  Research revealed that a dance studio specializing in Latin dance was located in the heart of New Haven, not far from our school.  I subsequently met with choreographer Alisa Bowen.  She graciously fit our class into her busy schedule and agreed to work with us over a five-month span.  She charged a fee for her services; we managed to negotiate a reasonable, per-session price.  (Because I had written a grant and received funding, I was able to financially plan for the first round of dance lessons.  During the upcoming 2016-17 school year, grant funding may not be available.  In this regards, I have devised an alternative plan to cover dance studio rehearsal costs.  This includes (1) bringing a proposal before our School-Based Management Team to obtain administrative approval to host a school-wide fundraising event on behalf of my class; (2) taking advantage of Box Tops for Education fundraising initiatives; and/or (3) implementing a weekly class banking program to raise the funds. [Taking on the latter initiative will additionally serve as a hands-on Math and Social Studies lesson to reinforce money calculation, money management, and real-world application.].)

Senorita Alisa first visited our classroom during month-end February, during which time she highlighted that Latin music and dance forms like Salsa, Son, Rhumba, and Merengue are experienced throughout the world.  She emphasized that the music and syncopated dance steps that accompany these dances can be traced to Cuba’s past history.  She shared how black people from West African shores were brought to Cuba aboard slave schooners.  Their ankles were shackled with metal chains.  As a form of exercise, the bound captives were forced to come up from the ship’s hull to exercise above deck.  The chains inhibited their movement.  Out of necessity, they slid one leg over the next, in unison, to safely move from one locale to another.  Their forced, unified movements were often accompanied by the rhythmic beat of a conga drum.  According to Miss Alisa, that unified, foot-sliding movement laid the foundation for many Cuban dance steps; today, those movements are used to symbolize the oneness of Cuban people. 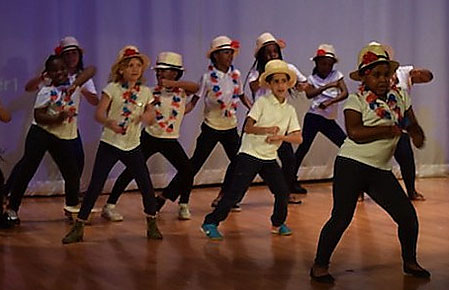 Our rigorous, monthly dance sessions were reinforced with weekly, student-initiated dance rehearsals.  Memorizing numeric dance-step patterns kept the practice on point.  As part of this trial-run study, a culminating activity was planned to enable students to present what they had learned before our school community.  That opportunity came to fruition on June 9, 2016, when the children performed during our school’s annual International Night gala.  Before performing, they presented the rationale behind their dance presentation, citing what they had learned from Miss Alisa coupled with their research findings.  Dancing in unison, the children demonstrated their understanding of Cuban culture with syncopated know-how and Cuban flair!  As a follow up exercise, our class collectively created an expository piece providing instructions on how to execute their Salsa/Merengue routine.  My students each agreed that the persona of Cuban people is evidenced in their dance and music forms.

Student research efforts proved effective.  For example, the “Cuban Music & Popular Life” team made use of learned reading strategies to discover background info regarding the music of Celia Cruz and The Buenavista Social Club.  They also learned of a revered Cuban folksong entitled “ Guantanamera, ” sung by Buenavista Social Club member Campay Segundo.  I was impressed with their findings, for the threesome—Jordan, Ella, and Aaron—noted that the song speaks of equality for the poor. They also inferred that Cuban musicians were very creative and cared about their country, for many of the songs incorporated the musicians’ views about Cuban life.  They noted that this was evidenced in such music selections as “La Vida Es Una Carnivale.”  My students additionally cited sources of information to support their findings.  (Visit http://lyricstranslate.com/en/la-vida-es-un-carnaval-life-carnival-celia-cruz-life-carnival.html for Spanish/English translation.)

The team also embraced that dance and music were not limited to the previously noted rhythmic forms.  They highlighted that the “cha-cha” also originated in Cuba.  The team additionally learned that one of Cuba’s greatest dancers is a classical prima ballerina, Alicia Alonzo.  According to Ella, Miss Alonzo and her husband were supported by the Cuban government to create a dance school.  “Their school has been in existence for 60 years,” Ella proudly stated. “It is known as the Ballet Nacional de Cuba!”

As a spin-off of our interactive dance-studio sessions, coupled with their team-study effort, my researchers also inferred that part of the Cuban identity is perseverance and commitment.  The entire class concurred that that quality is evidenced in Cuban music and dance forms that span the test of time.

Supplemental Activity: Have students create a signature song to represent the spirit and persona of the class.  Have students disperse into collaborative groups to develop lyrics for inclusion in each stanza.  Agree upon a background musical accompaniment; if possible, collaborate with your school Music instructor to provide instrumentals.  Upon completion, have students embrace their song creation as a classroom anthem.  Share the melodic creation with fellow classes within your school. Through the use of song, students can identify themselves as a collaborative, cohesive classroom and/or school body.

Once again on a trial-run basis, I reached out to businesses within the New Haven area to complement classroom instruction.  At the beginning of March 2016, I contacted Soul de Cuba Restaurant General Manager Michael Iamele, asking that he allow my students to visit the restaurant.  I requested that he have his staff speak to my students solely in Spanish and allow my students to interview the chef.  In this way, students would receive an authentic feel for Cuban culture, the country’s official language, and all that goes into creating traditional Cuban cuisine. Michael agreed on all counts, noting that he and his staff would limit the use of Spanish to basic greetings.  Our goal was to help the children immerse themselves in the human-interaction, cultural experience.

As held true for our dance sessions, a fee was involved.  Because we were working with third graders, Michael and I negotiated a reduced price for smaller food portions.  Once again, because of grant funding, the cost of meal purchases for 25 students (and the instructor) was covered.