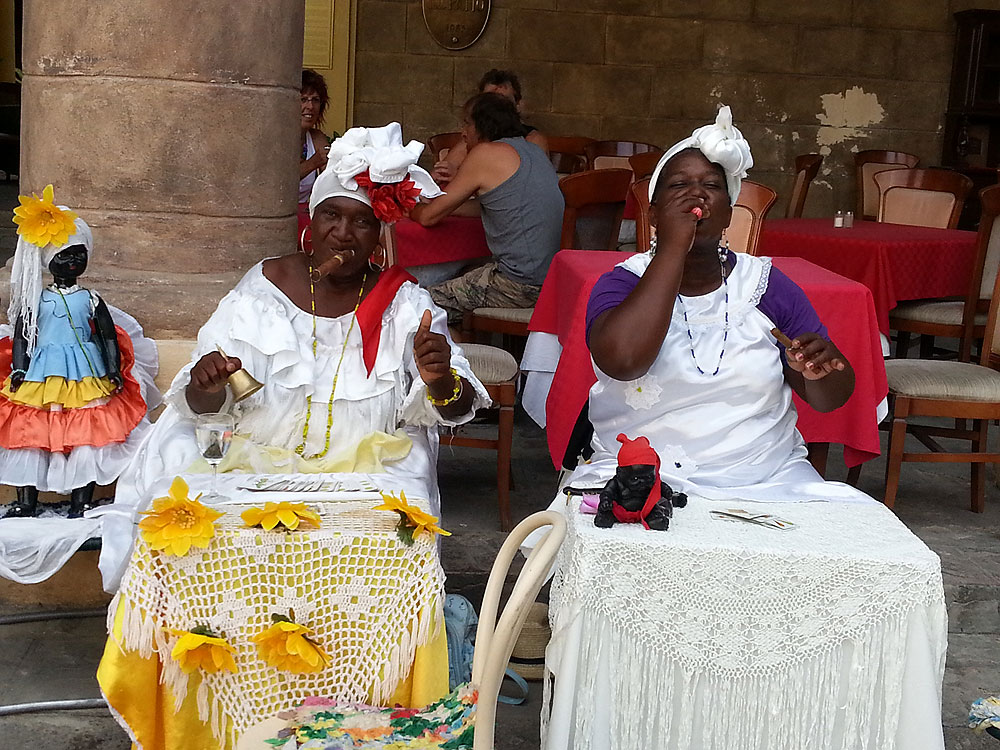 Cuba is a multi-ethnically diverse, Caribbean nation.  The largest island in the Caribbean, it is located 90 miles south of Florida.  It takes but 45-minutes non-stop to reach the country’s shores by plane.  Its diverse population—a predominant blend of people of aboriginal (Taíno, Ciboney, Arawak), Spanish, and/or African origins—totals approximately 11.4 million.  Its rich history heralds its identity.

Christopher Columbus arrived on Cuban shores in 1492 and claimed the country for Spain.  Cuba’s soil was conducive to growing tobacco, coffee beans, and sugar cane. In time, these products—particularly processed sugar—became major exports for the country.  The original inhabitants who once densely populated and resided on the land before Columbus’ arrival were overtaken.  Forced to work as laborers, many succumbed to disease brought over by their Spanish captors and/or lost their lives in the fight against their colonizers.  Nevertheless, the Spaniards needed laborers to harvest their crops within the agrarian nation.

Between the 1700 through late 1800s, Spain was actively involved in the African slave trade.  Many Blacks—from such regions today referred to as Nigeria, Sierra Leone, and surrounding areas—were captured and brought to Cuba where they labored on coffee, tobacco, and sugar cane plantations.  In time, Spain grew wealthy because of the slave trade and the sugar export.

By the mid-1800s, anti-colonial and slave revolts began to take place on the Caribbean island.  For three years beginning in 1895, Cuban revolutionaries fought vehemently to overthrow Spanish rule.  Sympathetic to the plight of its Cuban neighbors—and aware that the island could serve as a strategic locale for American military interest—the United States assisted in Cuba’s fight for independence.  Because of our country’s involvement, many believed Cuba would serve as an indebted ally to the United States.  In a sense, America interceded in Cuban affairs such that it could in theory be deemed its new colonizer.

Post the Spanish-American War, the U.S. maintained a military presence in Cuba.  Business and trade went on between the two countries. 3 By 1908, the United States had established a leasing agreement for a naval base in Cuban waters in the territory known as Guantanamo Bay.  Cuba agreed to the terms of the leasing agreement.  Based on that agreement, the U.S. Navy stored countless tons of coal at a designated site.  The coal site was used as a filling station for naval sailing vessels through 1934, when the need for coal had subsided.  In time, unbeknownst to its Cuban hosts, the contract was modified such that a naval base could exist on the former coal site.  Additionally, the leasing agreement continued to be expanded to the advantage of the United States government. 4

Cuba was liberated from Spain.  As would be anticipated, new government leaders came into power.  During the 1920s through 1933, when prohibition was taking place in the United States, hedonistic social ills—ranging from Mafia-sponsored numbers running (illegal gambling) to prostitution—befell the island sanctioned in part by corrupt government leaders and the American government. Many of America’s elite found Cuba to be a great get-away and an indulgent place to be.

Among the Cuban leaders who promoted this economically-advantageous interaction was President Fulgencio Batista. 5 A revered member of the Cuban military, Batista served as the country’s president from 1933 to 1944 and again from 1952 to 1959.  Many Cubans—particularly the working class—disliked him.  They complained that Batista was corrupt because he favored the rich and did little for the impoverished people of Cuba. 6

Under Batista’s rule, the United States and private-land owners controlled much of the land and business enterprises.  During the mid-1900s, many American corporations—including AT&T—maintained a working relationship with the Cuban government, gaining profits, but giving Cuba an unfair portion of those revenues in return. 7 Guantanamo Bay—today a U.S. military detention center for war criminals—originally served as a leased coal–storage site for the United States government.  By 1934, America expanded the terms of the leasing agreement, giving U.S. naval forces full access to the area for use at any time. 8 Funds gained from that interaction stirred Cuba’s economy at the Cuban people’s expense.  In a sense, the United States supported Cuba’s economy; it also supported Fulgencio Batista’s form of government.

By the early 1950s, then military leader and attorney Fidel Castro Ruz was well known among his people, for he played an influential part in encouraging his countrymen to rebel against the Batista regime.  Fidel, as held true for his followers, believed Batista’s unfair rule should come to an end.   Together, he and his rebels launched a revolution.  Among Fidel’s military entourage were his brother, Raul, and Ché Guevara, an Argentine freedom fighter and dedicated friend.  Together, the three along with their soldiers overturned Batista’s government.  Fidel Castro became Cuba’s president in 1959.

Because the United States had helped Cuba in the past, American government officials may have presumed Cuba would continue to embrace its economic dealings with the country.  Fidel Castro and his followers, however, believed that the United States engaged in unfair business practices with his nation.  He was displeased with the disproportionate amount of profit gained by the U.S., with little benefit to the Cuban people.  He too was displeased with the extensive misuse of the Guantanamo Bay leasing agreement.

After taking power, the Cuban government made changes in their economic dealings with the United States.  Castro seized foreign-owned businesses in an effort to terminate the control of American-owned industries on the island.  In an attempt to promote equity for those who had been disenfranchised, Castro also outlawed racial discrimination and redistributed the wealth on the island so that the impoverished too would be able to thrive on the land.  Farms, industries, and communication systems throughout Cuba were nationalized.  Upper and middle class constituents of Cuba were stripped of past privileges they had previously enjoyed.  Many fled to Miami, Florida.

Castro additionally maintained that the perpetual 1934 lease agreement regarding Guantanamo Bay was illegal.  Under Batista’s rule, funds toward leasing the property were paid in a timely manner.  Castro, however, refused to accept U.S. funds towards the leasing that property.  Thereafter, tensions between Cuba and the United States soared.

In time, the United States severed trade and industry ties with Cuba, placing economic sanctions on the country.  With no alternative recourse, Castro reached out to other nations:   he began to conduct trade with the Soviet Union, today referred to as the Russian Federation.  That stunned American government officials, for the United States and the Soviet Union maintained an adversarial relationship; the two countries were at odds regarding the nuclear arms race.  America and Russia engaged in discussions regarding the use of the Cuban nation, yet Castro was never brought into the two-way discussion. Although he did not promote the threat of nuclear war against the U.S.—nor fully took on the communistic views of the Soviet Union—America feared that Cuba would align with Russia.  Because of Cuba’s strategic location, America strongly believed Cuba would obtain those destructive weapons, placing the U.S. in imminent danger.

Initially under Castro’s rule, it appeared social and economic conditions would improve for the Cuban nation.  By the 70’s, Cuba had become economically advanced: the country’s health care system and government-managed apartment and homes made housing available to the people.  Education for all was promoted.  In time—with the U.S. embargo and the downfall of Cuba’s primary trade partner, Russia—Cuba faced economic hardship.  The residual effect of the embargo continues to impact the country well into the 21 st century.

After more than 50 years, Fidel Castro is no longer El Presidente de Cuba .  His life journey is most fascinating.  Born on August 13, 1926, he was conceived out of wedlock to Cuban sugar plantation owner Angel Castro and his maidservant, Lina Ruz Gonzalez.  Young Fidel knew well the arduous work, ill-treatment, and low wages reaped by those who labored in the sugar cane fields, for he himself had seen and on occasion had worked in the fields alongside the disenfranchised.  Additionally, Fidel’s father did not claim him as his son for the first 17 years of his life.  Because of this, Fidel took on his mother’s last name, " Ruz. "

Ironically, it is said that during his childhood years, Fidel had a rebellious spirit.  At age 13, he allegedly helped organize a strike of sugar cane workers on his father's plantation.  Perhaps his familial relationship with his father, coupled with what he had experienced on the plantation, contributed to his overall behavior, political views, and fervor in fighting on behalf of the underserved and working poor.

When he reached age 17, his father married his mother.  At that time, Fidel's last name was officially changed to "Castro." Thereafter, Fidel's father enrolled him in Jesuit boarding schools. Fidel was an intelligent young man, but he was not fond of Jesuit teaching practices and was not the best student.  He loved baseball, but he gained popularity as being an all-around athlete.

By 1945, Fidel entered law school at the University of Havana, where he received his Doctorate.  Thereafter, he worked as an attorney.  His caseload encompassed working on behalf of Cuba’s poor.  Once again, Fidel Alejandro evidenced the inequities between the wealthy and the impoverished people of his nation.   Later, he became involved in politics.  The rest is history.

In 2008, due to poor health, the former president resigned from his leadership position.  His brother, Raul Castro, has taken over as interim president.  Raul Castro intends to lead his country through 2018. Although Fidel Castro is no longer the official leader, he consults with Raul regarding government affairs.

Some say Fidel Castro is one of the few leaders who worked on behalf of the people.  In many Latin American countries, he is revered as an impressive role model.  Under his leadership, free and universal education, medical care, and housing for all Cuban citizens were placed in the forefront. 9 Today, his nation has an impressive 97% literacy.  Life expectancy among Cubans is 78 years, and the infant mortality rate has significantly decreased.  He made efforts to eradicate race discrimination between dark and light-skinned Cubans that ran rampant under previous presidential regimes, uniting the populace.  Cuba’s education system has produced some of the best physicians in the world.  Despite economic sanctions, a deteriorating infrastructure in need of dire repair, and economic woes, many believe Castro and his government continues to work on behalf of the people.

Others believe Castro is a ruthless dictator who for too long has held on to idealistic, non-materialistic views; his anachronistic views do not align with today’s changing world. In an attempt the level the social and economic playing field for the poor, he annihilated Cuba’s middle class and elite.  According to others, Castro’s form of government rule must come to an end.  How Castro is perceived is a matter of opinion based on life circumstance.

Cuba in the 21 st Century

Cuba’s economic and societal stance differs greatly today from colonial times.  In recent decades, Cuba’s sugar industry has waned.  Today, the majority of Cubans are employed in the service industry, working as cooks, waiters, cab drivers, laundry workers, physicians, nurses, teachers, truck drivers, mechanics, tour guides, and more.  The state employs people to work within its various departments.  Some Cubans have been permitted to open their own businesses like restaurants, art shops, and other small business.

Irrespective of their occupation, wages are modest.  Upon setting foot in the country today, one would think he or she has been catapulted back to the 50s.  The infrastructure is deteriorating, yet stands regally. Despite economic and societal hardships, Cubans have been resourcefully resilient.