Tools and Art in the Hispanic Homes of New Haven

The high school in which I am presently teaching is very focused on the state standardized test CAPT. We are especially looking at the Reading for Information (RFI) section of the test which involves the students answering four multiple choice questions and two open-ended questions.

Due to this school-wide focus, I incorporate RFI-style readings in all of my units. One of the articles is “Hispanic Community Growing in Size, Influence on Home Improvement Marketplace; 2005 National Hardware Show the Place to Be for Key Home Improvement Trends” (BNET Business Network). This article will be the perfect segway into the study of the Hispanic home. It gives useful information that, “Hispanic home ownership in the U.S. rose to 48.1 percent in 2004 -- up from 46.7 percent in 2003 and 41.2 percent 10 years ago.” The article also states that, “Hispanics are very attentive to their homes, focusing on décor, color and style.”

A source in the article, Rob Cappiello, also adds that it is important to, “Understand that the majority of Hispanics in the U.S. are not assimilating -- they are in constant contact with their home countries and language and will often purchase imported products that cater to their specific tastes and preferences.”

As a teacher, I experience on a daily basis what Cappiello said. Many of my students still, at the very least, hear Spanish from someone in their family. Usually, the students still speak Spanish in their homes or amongst themselves. I witness other non-Hispanic students hearing and questioning students who speak in Spanish in school. It throws them off. I believe that my non-Hispanic students are at a loss to comprehend what is going on around them and they absolutely need some education around the Hispanic norms.

As the unit progresses, I would also like the students to complete another RFI-style reading on the importance of the Hispanic home and the Hispanics population boom. This second article I will use is titled, “Fastest Growing Market; Across U.S., Hispanics Become Key Factor in Real Estate Industry” (AZ Housing). This article sheds light on the fact that many Americans think of the West coast when they hear the word “Hispanic.” However, one of the author’s sources, George Lacy, points out that Raleigh, N.C. “saw its Latino population grow by 1,200 percent between 1990 and 2000.” The article also lists figures for other East Coast cities, like Philadelphia, stating a percentage breakdown of the population as follows: 47.1% Latino, 55.5% African American, 56.1% Asian, 73.6% White.

With all of these percentages and the insight into the Hispanic influence on the housing market, the students will have to sift through the information to correctly answer four multiple choice questions and two open-ended questions on the article. The multiple choice section and the open ended section are both split into two parts; Developing and Interpretation and Demonstrating a Critical Stance.

I’m hoping that after using these two written sources, students might better appreciate the influence that Hispanics have had on society in the United States. For those who are visual learners, I will try to impress the point of culturally specific home objects with pictures that were taken by my Advanced Placement Spanish Language class. All of these students were at least heritage speakers.

17. This is a picture of a very special set of dominoes that my father received as a gift. They were specially made in Puerto Rico out of wood. They’re only for show though-too much slamming goes on in domino games to risk chipping this special set. --Photo and caption by AP student Melissa Matos.

18. This is a picture of all the sets of dominoes in my house (minus 1). The middle 3 are plain and can be found virtually anywhere, but the top and bottom set are special. The boxes are wood and the have “Puerto Rico” and “Palo Viejo” written on the backs. -Photo and caption by AP student Melissa Matos.

19. This is a picture of my family’s domino table, complete with 4 chairs and a set of dominoes. This is a very important part of Puerto Rican culture-it is second only to dancing when it comes to favorite Puerto Rican pass times. Whenever a Puerto Rican family gets together, like for a barbecue, a domino marathon is sure to take place. Mostly the men play, but the women in my family often play alongside their husbands. --Photo and caption by AP student Melissa Matos. 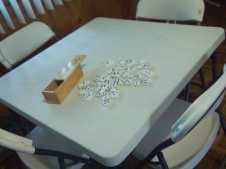 20. This is another picture of a wall in my sala, this time it is a bookshelf built into the wall filled with pictures of ALL my out-of-state relatives. This would be an example of using a wall of pictures as a way to be able to see relatives everyday that we don’t get to see as often as we’d like. --Photo and caption by AP student Melissa Matos. 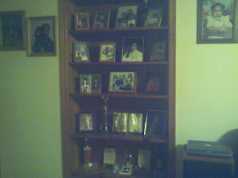 21. This is a picture of the tiles on my kitchen floor. I also think tiles are very popular in Hispanic and Puerto Rican kitchens because it makes for a very easy cleanup for kitchen spills or just spring cleaning. My parents put these in themselves after removing the old tiles that had been there for over ten years...I wonder if renovations are a Puerto Rican thing here in the States, because I know my family and a few other Puerto Rican families that are constantly re-doing or adding something to their house. -- Photo and caption by AP student Melissa Matos. 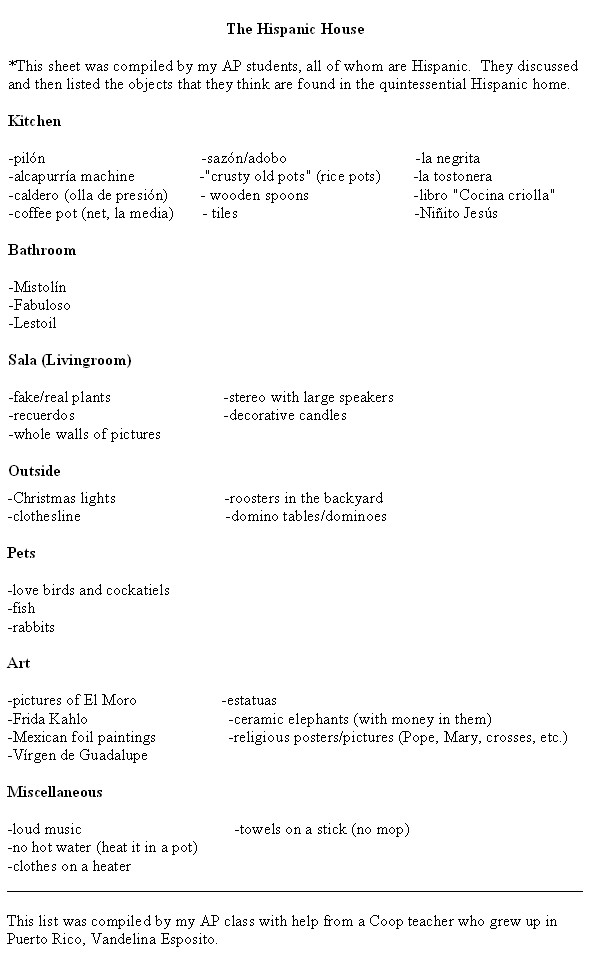