There are many different ways in which a person or event can be memorialized. In death, the most common way today is with a headstone. A headstone can serve two main purposes. One, it marks the spot in a cemetery where the deceased resides. Two, it may give information about a person, their name, date of birth and the date they died, as well as other information about the person. Though I want this unit to focus on living memorials, my students will be taking a trip to the Grove Street Cemetery. I think that is important to have a general knowledge about what they are seeing and why certain figures and shapes are being used to commemorate someone’s life. It is believed that a cemetery divulges much about death, but it also divulges much about life. 11 The cemetery is a microcosm of the society all around it. In the seventeenth and eighteenth centuries, there were three types of figures you would see on headstones: Death’s Head, Cherub, and Urn and Willow. The Death’s Head headstones became popular in the 1680s and by 1750 headstones moved toward the Cherub. The Cherub headstone saw its beginnings in the 1740s and dwindled down by 1810. The Urn and Willow headstone began to really become popular in the 1790’s and by the 1820’s had replaced the Death’s Head and Cherub as the headstone of choice. Though these dates reflect a cemetery in Stoneham, Massachusetts, these styles of headstones could be found in most old cemeteries throughout New England.

A question one might ask is, “Why a Death’s Head?” From the modern eye it seems scary and foreboding, however, during the early 1700’s, the Death’s Head was a reflection of the religious beliefs at that time. Orthodox Puritanism was the dominating religion in New England at that time. The Death’s Head was a more mortal and neutral symbol to display on a headstone. It served as a graphic reminder of death and resurrection. 12 The epitaphs on a headstone that featured a Death’s Head design would focus on decay and the brevity of life. An example reads as such:

My Youthful mates both small and great
Come here and you may see
An awful sight, which is a type
of which you soon must be 13

Other epitaphs that could be found on a headstone that had a Death’s Head design had an emphasis on hard work and exemplary behavior. An example of which reads:

He was a useful man in his generation,
a lover of learning, a faithful
servant of Harvard College above
forty years. 14

Examples of Death’s Head headstones can be seen in figures 1.1, 1.2 and 1.3. They represent the different styles in Death’s Heads from very early in its style to the progression of later Death’s Heads. These photos were taken at the Grove Street Cemetery in New Haven, CT. 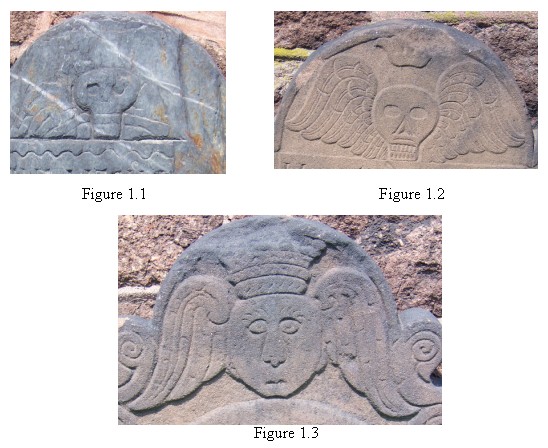 During the heyday of the Death’s Head headstone, the Cherub headstone would be very hard to find. The Cherub was considered to be a heavenly being and to use its image on a headstone verged on heresy. The Puritan church felt using its image might also lead to idolatry. 15 So as the decline of orthodox Puritanism continued, the use of Cherubs in headstones began to also be used more. The further from Boston, the more quickly the Cherub replaced the Death’s Head as the headstone of choice. The reason for this is believed to be that the Puritan church was strongest in Boston and the further people were away from the church, the less enforcement of Puritan values and ethics and the more readily they were able to accept the changes. 16 The focus of Cherubs was on resurrection and later heavenly reward. 17 An example of an epitaph that had a Cherub on the headstone read as such:

Here are three examples of the Cherub headstone found at the Grove Street Cemetery. The Cherub can be difficult to identify because the later Death’s Head moved away from the skull and more towards looking like the human face. Due to the overlap of styles, the Death’s Head began to look more “cherub like” in its final phase. Figures 2.1, 2.2 and 2.3 show the progression of the Cherub. The image of figure 2.2 is not a picture from straight on. There was a shrub in the way and the photo had to be taken on an angle. 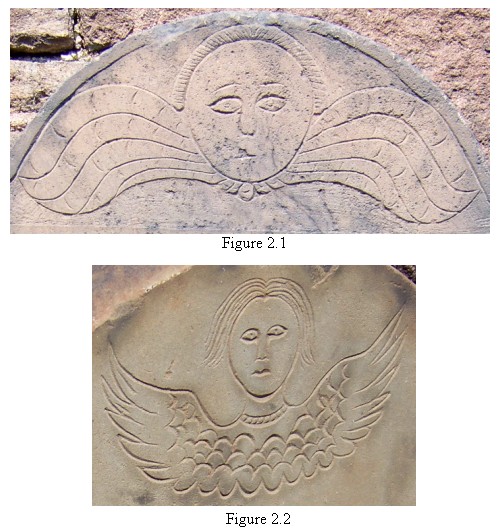 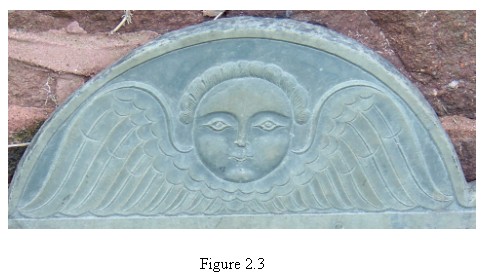 The final early style of headstones that I would like to show my students is the Urn and Willow. This style began to become popular in the 1790’s and by 1810 had replaced the Cherub as headstone of choice. The Urn and Willow design interestingly enough became used as cenotaphs, a memorial erected to commemorate those actually buried somewhere else. The Urn and Willow design became popular as the rise of less emotional, more intellectual religions, such as Unitarian and Methodism became more widespread. 19 The weeping willow represented the sadness here on earth and the urn represented the soul living forever in heaven. The pictures of Urn and Willows can vary. Figures 3.1, 3.2 and 3.3 show different styles of the Urn and Willow. Interestingly, the headstones that had Urns and Willows were much more faded than many of the Death’s Head headstones, even though the Death’s Head headstones are much older. 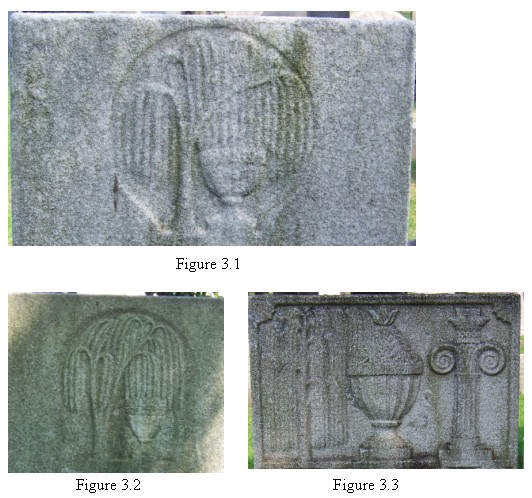 Taking my students to the Grove Street Cemetery will be a great way to see how people celebrated the life of their loved ones in the past. It will hopefully give them some additional creative ideas for how they want to create a living memorial for someone in their family. The cemetery has some very unique and interesting headstones and statues and obelisks that should stimulate different thoughts and ideas.

I had an opportunity to meet a living legend this past summer. Dr. Helen S. Faison is the director of the Pittsburgh Teacher’s Institute. She and I were both at Yale taking part in the National Initiative, a teacher’s institute on the national level. I found out during our time there that there was a school named after her in Pittsburgh, Pennsylvania. The Helen S. Faison Arts Academy opened in September of 2004 and focuses on the arts. As I have stated earlier, New Haven has many schools that are named after outstanding local educators. I have never had the opportunity to meet any of them. I had always wondered what someone has to do to have a school named after them. I spoke with Dr. Faison one-on-one for about an hour. Dr. Faison told me that her mom died when she was young and she went south to live with her grandmother. The schools were segregated and they only went as high as 7 th grade. Despite the hurdles that society tried to throw Dr. Faison’s way, she was able to persevere and graduate high school. She then went to college where she received all of her degrees from the University of Pittsburgh, where she received her bachelor’s degree in 1946, her master’s in education in 1955, and her doctorate in 1975. She was the first African-American and woman to be a principal in Pittsburgh; she was also the first African-American and woman to hold the title of Deputy Superintendent and interim Superintendent of the Pittsburgh school system. Dr. Faison’s students have gone on to become prominent people in Pittsburgh. At 84 years old, Dr. Faison walked all over the Yale campus with the other Fellows and never seemed to be tired. She was truly an inspiration to everyone and it gave me an insight into what type of person it takes to get a school named after them. Dr. Faison didn’t go seeking fame and fortune, she was the best teacher that she could be and demanded excellence from her students. All of the accolades that followed were simply because she put her students first and her wants and needs second.

This curriculum unit was very difficult to complete. My mother had been battling colon cancer for the past five years. The disease began to really take its toll in the months of April, May, and June. My mom lost her battle with the disease on June 9, 2008. With this unit focusing on creating memorials for loved ones, I would like to dedicate this curriculum unit to my mom, Betty J. Thornton. Her insistence to “finish what you start” and “always do your best” has enabled me to struggle through the most difficult period in my life and create something she could be proud of. This unit is my memorial to my mother.