Engineering in the K-12 Classroom: Math and Science Education for the 21st-Century Workforce

Quadratic Regressions and the Catapult Wars

Students will complete the warm-up handout, which reviews function notation and how to evaluate functions in function notation. The warm-up is meant to help scaffold the rest of the lesson, which will rely heavily on evaluating functions. Students should need no more than 5 minutes to complete this assignment. When the class is done, ask students to quickly go around the room and compare answers. Are there any discrepancies? Allow students to explain the problems to one another. You can assume that some students did not square -1 properly and therefore made a mistake in #3. Have a student review #3 on the board if a lot of the students made this mistake.

This is a small group activity. Divide the class into groups of two or three. Each group will be assigned one of three prompts. Ask students to evaluate the function over a defined interval

and to create a t-table of values. Students should be familiar at this point with t-tables and how to plot points from a t-table. Step 1 for each group requires the same skills, but offers a slightly different prompt so groups can make comparisons later in the activity.

Each group should be given an oversized piece of chart paper on which to write their function, their t-table, and to draw a graph. Students should follow the prompts on the handout for setting up their graph. Step 2 is the same for all groups.

Once students have completed their graphs, have them display their graphs next to one another on the wall. Students will complete a gallery walk to compare and contrast the overall appearance of the graphs. What do quadratic functions look like? What was similar about each of the graphs? How did they differ? Students will then share their observations with the class during an all-class discussion.

Hang gliders are small aerial crafts that people usually fly for recreation. You are a photographer at a hang gliding show. You were instructed to take a photo every 10 seconds in order to capture the movement of the hang glider's dive. The dive is modeled by the equation f(x)=(1/100)x 2 - (25/2)x +30 , where x represents the time since the dive started and f (x) represents the height of the hang glider.

Catapults were medieval weapons designed to launch an object, usually for destructive purposes. You are designing a catapult that launches a boulder along a trajectory given by the equation f(x) = - (1/10)x 2 + x + 6 , where x represents time and f (x) represents the height of the projectile.

You were instructed to design an apparatus for a skate park in a nearby neighborhood. A skateboarder's position on the apparatus is modeled by the equation f(x) = 2(x-2) 2 , where x represents seconds and f (x) represents the skateboarders height from the ground.

1. Complete the following t-table by evaluating the equation given above.

2. Create a graph that depicts the trajectory of the catapult by plotting the ordered pairs given in the table in question 1.

3. Use the graph to answer the following questions.

Students will begin learning key terminology and familiarizing themselves with the key components of parabolic curves: the vertex, absolute maximum/minimum, y-; intercept, x-intercept(s), and increasing and decreasing intervals along the curve.

The prior activity will lead into a discussion on what quadratic functions look like graphically. Class notes should review definitions of parabolas, increasing and decreasing intervals, extrema, domain, range, the line of symmetry, x- and y-intercepts and concavity. Review several examples until students are able to identify each of these components on a graph. Students will practice identifying these components within context in the next activity.

Examine the posters (Hang Glider, Catapult, and Skate Park) each group made during Lesson 1. Analyze each poster, and record the following information in the table below. 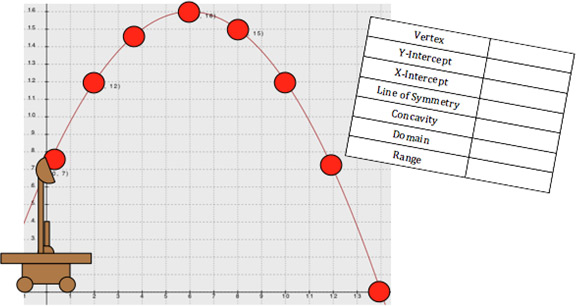 Students will learn how to perform a quadratic regression in order to determine the equation of a quadratic function given a set of data points. Students will begin interpreting the significance of the vertex, the intercepts, and increasing/decreasing intervals.

A catapult was launched and the projectile followed the path seen in the graph. Use the graph to complete the table below. Each axis is scaled by 1.

Students will be given a set of notes on how to perform a regression on a set of data. Students will learn about the coefficient of determination and what r 2 values indicate about the fit of the model to the data. Walk students through a couple examples of how to perform a regression by looking at several data sets for practice. Data sets can be found on the Math Tidbits website. It is important to look at non-quadratic models so students gain a richer understanding of how to determine what type of model fits the data best.

Perform linear, quadratic, and exponential regressions for the following sets of data. Determine which model fits the data best by examining the coefficient of determination. Finally, record the equation of each model. 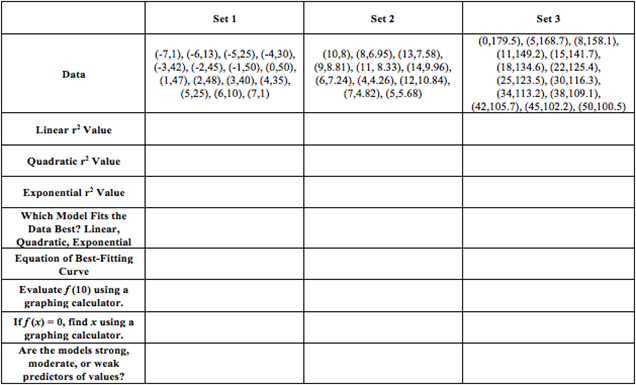 This lesson serves as the capstone project to this unit. Students will explore how adjusting various components of the catapult affect the equation of a quadratic function. Students will attempt to tie these changes directly to the coefficients of the quadratic model y = ax 2 + bx + c. In the end, students will make predictions about what kind of adjustments they can perform to the catapult in order to alter the equation to meet a desired theoretical outcome.

Show a clip from Top Gear Series 4 Episode 4. This clip introduces students to a car catapult and is a good illustrator of the parabolic trajectory of a catapult launch. Use this time to discuss with students what engineers must consider when designing an apparatus like a catapult. Ask students to consider how parabolas can be manipulated. Transition from this discussion into the Unit Project.

Provide a basic demonstration to the class that shows how to use the catapult, how to adjust its various components, and review the location of the three points being collected. Data from the demonstration should be recorded on the board and will serve as the data for the control group. All data collected by groups after altering a component to the catapult will be compared directly to this control data.

The launch point is the point of release. This point is located at (0,y 1 ) , as seen in Figure 1, where y 1 should be the height of the catapult when the arm is vertical. The ground point is (x 2 ,0). x 2 is the horizontal distance of where the projectile hits the ground. The third point is labeled the canyon point since students will move the catapult to an elevated surface for the final launch. Explain to the students that whatever surface the catapult sits on serves as the x-axis. Although the floor may initially serve as the x-axis, once the catapult has been repositioned to a table, for example, the table becomes the new x-axis. When the catapult is repositioned onto an elevated surface, the graph's window is changed to include the third and fourth quadrants, or the region in which y < 0 . 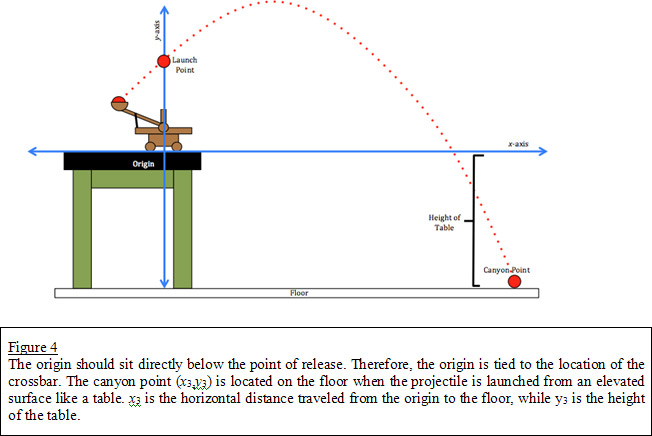 To determine a model for the projectile, it is necessary to collect several data points. For this project, you will perform numerous trials and perform a quadratic regression to determine an equation that approximates the parabolic trajectory of the projectile.

To begin, copy the initial information for all the catapults from those used in the control group in the demonstration. This information should be recorded below. Every group should begin with the same initial information except in ONE (1) instance. The teacher will instruct each group to either vary the arm length, the angle of release, or the number of times the rubber band is twisted. It is essential that students only vary one of these components, otherwise they will not be able to attribute any changes in flight directly to the change in the apparatus. 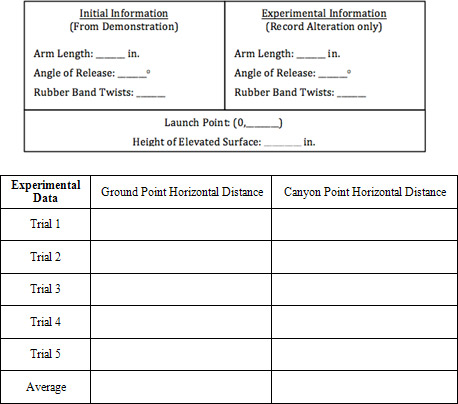 Groups should present their results to the class. If the experiments went well, the group that changed the arm length should have equations that are nearly identical with the exception of c, the y-intercept. The angle of release group should notice that a, the leading coefficient, is significantly different. Students should be able to make a connection to the fact that changing the angle of release caused the parabola to widen or narrow, which they know by now is caused by the leading coefficient either being greater than or less than 1, respectively. Finally, the torsion group should have relatively similar a- and c- values as the angle of release and the initial launch height did not change. The b coefficient, however, should differ for each equation.

Refer to the following prompt and your conclusions from earlier in the lesson to answer the questions below. Students will need to consider manipulations of the catapult apart from those that they were assigned in their original groups.

The last component of this activity is to have students use what they know about manipulating the catapult to alter their equations in order to hit specified targets. Provide three targets around the room, each of varying distance from the catapults. Ask the students to evaluate the control equation to see if adjustments are necessary. If y = 0 , then the catapult is positioned correctly. Position one target so no adjustments are needed. Position the other two so students must adjust their catapults to hit the targets. Students should know what type of adjustments will increase or decrease the distance the catapult launches the projectile.

Alternatively to the Algebra 2 approach to the project, students can make alterations to just one component of the catapult and test to see whether altering arm length, for example, yields a linear or non-linear change in horizontal distance thrown. This slight alteration introduces students to modeling without necessarily going to in depth into quadratics, making it a more algebra 1 friendly project.