The Brain and How it Learns Language

When I began thinking about this unit, I tried thinking of how I could get students to learn more efficiently. Then it came to me: I never learned about how the brain actually works in terms of learning language. Understanding this process could lead to significant breakthrough in pedagogy for World Language teachers. The following is a summary of how the brain processes language.

In 1861 France, Paul Broca began a study on a man named "Tan" because that was the only sound he could make, although he could understand language and had no motor disabilities. Upon Tan's death, Broca examined his brain and noticed a lesion on a particular part of his brain. To test his hypothesis, Broca examined eight other patients who had similar language disabilities. Each of them had similar lesions in the same part of the brain. He came to the conclusion that "we speak with the left hemisphere." 7 Another section that was associated with language was discovered ten years later by Carl Wernicke. He figured out that people who had injuries in this part of the brain could speak, but could not create coherent sentences; they could not comprehend the language. Focusind on these two parts of the brain, the first language theory came to be, created by American neurologist Norman Geschwind. 8

In essence, according to Geschwind, each part of our brain that is associated with language is connected to the other. It is the connections between the Broca and Wernicke areas that allow us to understand language. Without those areas working properly, any sound coming in contact with our ears and brain are just that, sound, regardless if it is meant to be meaningful language at all. When we are learning a second language, our brains are not necessarily using Wernicke area just yet; it takes time and practice for that part of the brain to activate. Broca's area is the section of the brain that allows the production of language, mainly, speaking and writing. 9 These two areas of the brain need to work together for people to use language effectively. It seems that the questions are: Do people who are bilingual have more connections between these two areas of the brain, are the areas larger, or is the second language held in some other part of the brain? 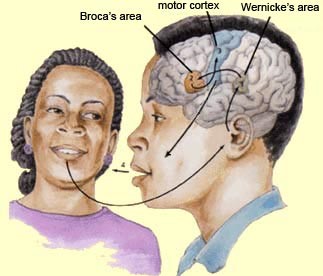 Well, in the year 2000 at Cornell University a study whose overall goal was to determine the use of fMRI's was conducted. One of the parts of the study was testing several bilingual people, half of whom learned both languages in their infancy while the other half learned their second language as adults. 10 Their finding was very interesting. They found that bilingual people's Wernicke area, which is responsible for understanding language, was similar to that of monolingual people: that part of the brain handles all understanding of language, regardless of the language. Almost as if to that part of the brain, there is only one language, the language of comprehension.

Broca's area, which is responsible for the production of language is different. For all bilingual people tested, there were two distinct sections in the brain responsible for producing each language, essentially, there were two separate Broca's areas. For those that learned early in childhood, these sections were large and overlapping, while those who learned later in life had smaller sections that did not overlap as much. This is so fascinating because it explains a lot. I learned both English and Spanish at the same time. I can think in either language, and I can go back and forth several times in the same sentence; maybe that's because the same part of my brain is active whether I am speaking English or Spanish. On the other hand, this theory can also explain why people who learn a second language later in life cannot do those things. It also explains the final phenomenon that the comprehension of language and the production of language, while inevitably connected, are distinct. There are so many Latino students around the country who grow up hearing Spanish at home but using English at school. The outcome of that situation are students who understand Spanish fluently, but absolutely cannot speak it or write it. It seems very counter intuitive but these scientific advancements are providing meaningful insights into language learning.