Vocabulary is one of the most essential and necessary things to learn when trying to master a new language. Without it, nothing would have meaning. The various textbooks that many educators use, like Realidades or Expresate , know this all too well. For each new chapter there is a picture with various things going on in them and Spanish vocabulary scattered throughout. This is a very effective way to get students to learn vocabulary while avoiding translation. All the vocabulary that is presented, however, falls into three categories: things, actions, and adjectives. While I won't claim that using pictures to teach these different vocabulary categories is easy, I will say that it is pretty straightforward. A unit like this one would not have to be written about it.

What is very interesting about all of the textbooks that we use, is that as soon as they transition from rote vocabulary to grammar so that students can begin to create sentences, the pictures disappear. The following is an example of what I mean. 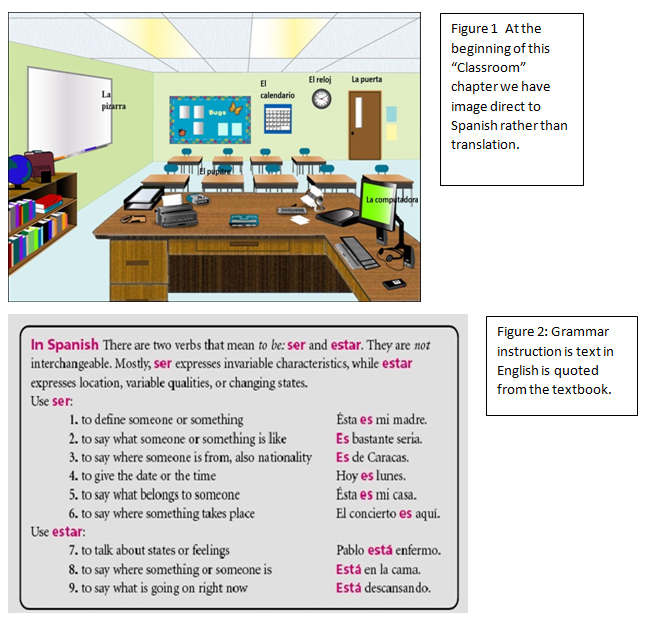 For me this example is telling. It shows that mainstream authors of textbooks for teaching a World Language have not figured out a way to effectively teach grammar in the same fashion as they teach vocabulary. There must be a way.

There are two authors who have created and implemented theories that seem to work, the first of whom is Andrew Wright. In his book Pictures for Language Learning, he gives over 200 different examples of how to use pictures to teach different ideas in a language. He presents five different concepts or five ways of looking at language. Those five ways are: Structures, Vocabulary, Functions, Situations, and Skills.

Structures are simple statements that don't have any underlying meaning, there is no need for analysis. "The boy is walking." or "Is it raining?" are two examples of this. Vocabulary are lists of words that can be out into categories. White, black, yellow, orange are all colors. Functions look more at the meaning behind a statement. For example, when students are learning how to say "Hello, how are you? My name is Jean." They are really learning how to introduce themselves to someone else. Situations seem to be the most complex of the five: putting together structures, vocabulary, and functions that a student is familiar with to be able to describe a situation or maintain a meaningful conversation. The four skills in language are reading, writing, listening, and speaking. As teachers we should make sure that students are exposed to the preceding four ways of looking at language with all four skills. Wright shares many examples on how to do that. In the strategies section of this unit, I go over several examples in detail 11 .

M. Stanley Whitley and Patricia V. Lunn recently republished a book in digital form entitled Teaching Spanish Grammar with Pictures: How to Use William Bull's Visual Grammar of Spanish . In it they discuss William Bull's language theories as well as the 400 pictures he created to help teach Spanish grammar in particular.

There are three key ideas that Bull wrote about in terms of teaching and learning language. First, linguists have not paid attention to the role of meaning in their concentration on form. Second, learning another language is really another way to structure the world, not just language. Finally, something's meaning and function are defined by the contrasts to other things in the system. The first key idea on linguistics really speaks to two points: first, tenses in language are to situate readers or listeners in particular situations and cannot really have "rules," and second, "English translation is irrelevant to the structure of the Spanish language." 12

Bull's second main idea is about structuring the world. A great example is the verb to be . In English we use to be in many different ways. A system is in place where we understand why we are using to be in different contexts. The way Spanish's system is organized is different. ser, estar , and haber can be translated to "to be" in English, however Spanish speakers use each of the three verbs in different ways. This is a very good example to support not translating in the classroom. When I teach ser vs estar in Spanish 2, the students inevitably become confused and can't wrap their heads around the concept because they are stuck trying to translate the two different verbs to the same English verb.

Bull's third main idea rests on the principal that everything needs to be contrasted to be understood. In his 400 posters, which I am using for this unit, all of the pictures come in pairs or groups. In Spanish there are so many examples that could be used with these photos. For example, when we say "to leave the book" and "to leave the library," most English speakers understand what those sentences mean and that to leave has a slightly different definition in each. In Spanish, this slight difference in definition means that there are two different verbs. Dejar means to leave something behind, while salir means to leave or exit a space. Using translation and English to explain these small differences always confuse students. Now, however, I can provide suggestions as to how to avoid these confusions by using images.