Communities Responding to Natural Disasters: Two Forces to be Reckoned With

Section 3: Exploring Community through the Aftermath of Hurricane Katrina

The third phase of my curriculum unit delves more deeply into the complex nature of community through a closer look at the aftermath of Hurricane Katrina by way of looking more closely into the devastation that occurred as a result of not only the hurricane itself but also due to the conflicted nature of the rescue efforts, which ensued after the storm. It should be noted here that earlier in the year, my students engaged in a unit of study on Global Warming, wherein they researched various ways in which humans are altering the global environment by emitting carbon dioxide and other green-house gasses into the atmosphere. My students also completed a science experiment wherein they measured how the percentage of CO2 in the atmosphere affected the amount of time it took that environment to cool down. In addition to winning first place in the district city science fair, this hands-on approach to learning about what Global Warming actually means led to further explorations into how climate change is leading to various forms of natural disasters like glaciers melting, flooding, mudslides, drought and forest fires, etc. Upon developing this kind of background knowledge and environmental awareness, students can approach this complex concept of Anthropocene with a greater sense of maturity as it brings to light the fact that what we may call a natural disaster is in fact often a direct result of human activity. Therefore, following this train of thought, my students have greater insight into how the choices and actions by members of a community lead to a wide variety of short and long-term consequences, both positive and disastrous.

Lesson 1: A Humanistic Approach to Disaster

We begin our study of the aftermath of Hurricane Katrina through a literary approach in our reading of A Storm Called Katrina by Myron Uhlberg and beautifully illustrated by Colin Bootman. This story draws from real-life events as it paints a portrait of a ten-year old boy and his family in the immediate aftermath of the devastating hurricane and powerfully brings to light the challenges faced by the people of New Orleans and the response of its community through small acts of heroism. After reading this story, students are asked to reflect on the following questions:

Students work in pairs to share their reflections and explore this story from the perspective of other characters in the story, like the mother, father or dog in order to see it from various points of view and recognized the feelings and experiences that would be shared by all under such circumstances.

Students revisit the story, "Surviving Katrina" in the Rescues! core text as a way to refresh their memories of the event through the case study of Karen Nelson, a nurse in the Pediatric Intensive Care Unit, who was looking after a fifteen-year old boy named William who was in need of a heart transplant when the hurricane hit. Students will now be asked to reflect on the more humanistic qualities of this account wherein Karen acted like a true hero, risking her own life to ensure that William was rescued. Students are then asked to analyze Karen's choices to stick with William through it all instead of abandoning him and saving herself. Students are asked to act as one side of her conscience and persuade her in a paragraph or two to act in a certain way.

Lesson 3: Getting the Facts

Students engage in research to better understand the events, which led up to the hurricane, occurred throughout the onslaught of the disaster and took place in the aftermath of Hurricane Katrina utilizing the skills they have learned from phase 2 of the curriculum unit. Students can use non-fiction texts like Hurricane Katrina, Aftermath of Disaster by Barb Palser, Hurricanes, Witness to Disaster by Judy and Dennis Fradin, Hurricane Katrina by Peter Benoit. Additionally, clips from Spike Lee's documentaries, When the Levees Broke and If God is Willing and Da Creek Don't Rise as well as the National Geographic documentary, Inside Hurricane Katrina. In preparation for an upcoming written piece, students are then given guiding questions to consider as they research these various media:

Students are also given the option to glean understanding from novels like, I Survived Hurricane Katrina by Lauren Tarshis as well as Zane and the Hurricane by Rodman Philbrick, in order to incorporate different genres of reading into the research process. We also explore several articles from www.iconn.org like "You Can Count on Us" by Alan Van Zelfden and "After the Hurricane" by Suzanne McCabe. Having access to different articles through this website allows us to read diverse perspectives and study differing points of view regarding the disaster and its aftermath. Once again we revisit the importance of preparedness before, during and after a natural disaster and then use our understanding of rescues, survival guides and natural disasters to analyze what went wrong in New Orleans. Since students are in the fourth marking period by this time, this phase includes a persuasive writing piece wherein students take a stand and try to persuade their audience of what went wrong and what could have been done differently in the aftermath of Hurricane Katrina. (See Lesson Plan 2)

Students also engage in an engineering project wherein they work in groups of four to design a levee, which can withstand flooding. (See Lesson Plan 3.)

Lesson 5: Do humans play a role in 'Natural Disasters'?

To bring this phase to a conclusion, students reflect on what a natural disaster is versus a disaster wherein humans do play a role? And, do humans also play a role in 'natural disasters' indirectly? To support students in their reflection, as a whole class, we can then brainstorm and categorize those characteristics, which brought about the necessary change during the aftermath of Katrina and those characteristics, which further entrenched the community in tragedy and destruction. Such a discussion might lead to the following chart: 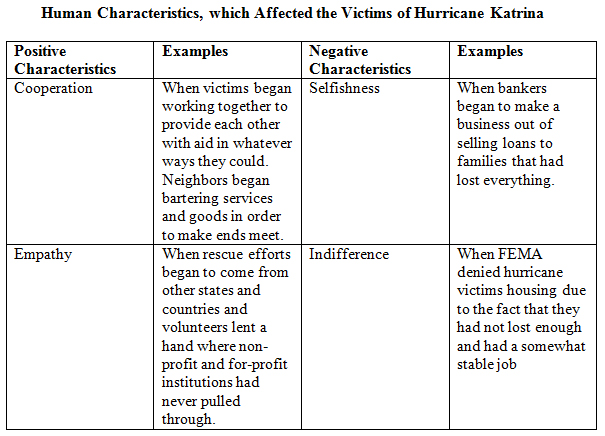