Seeing Mathematics in the Forces of Nature

Objectives : Students will be able to

How fast does a wave travel? The speed of a wave can be computed by using the same method that is used to determine the speed of a moving car by applying the formula speed (velocity v) = distance / time.

a. discuss properties of waves
b. demonstrate the experiment on the formation of waves
c. Discuss different types of waves.
d. Identify the parts of a wave
e. Review the formula for distance speed and time
f. Show the connection between the speed of waves and the speed of a car
g. Worked examples on CB.

Connect the sine curve as a model for wave. Draw and the parts of the wave draw the parallel to the sine curve (amplitude, crest, troughs, wavelength)

The Essential Questions : Why does the siren of the police seem to fade in the distance?

Objectives: Students will be able to

The sudden change in the police siren as the car passes by is defined as the source of motion. The Doppler Effect is the shift in the frequency and wavelength of the sound waves generated from the source moving with respect to the medium. Sound waves are produced at a constant frequency, and the wave-fronts radiate symmetrically away from the source at a constant speed, which is the speed of sound in the medium. The distance between wave-fronts is the wavelength. All observers will hear the same frequency, which will be equal to the actual frequency of the source.

i.) Introduction of the Doppler shift formula
ii.) Worked examples
iii.) Reading / research for students
iv.) Research paper on the uses of Doppler shift in medicine, metrology, and shipping.

Significant task : A police cars travels down a highway at a speed of 33.5 m/s or 75miles / hour. Its siren emits sound at a frequency of 400 Hz. If you are a passenger in a car traveling at 24.6 m/ s going in the opposite direction as the car approaches the police car moves and as the car moves away from the police car, calculate the frequency for each. Draw a picture the represent the situation.

The students will be able to

a.) Compare different sound levels
b.) Calculate sound levels
c.) Apply the properties of logarithms to calculating the intensity of sound. 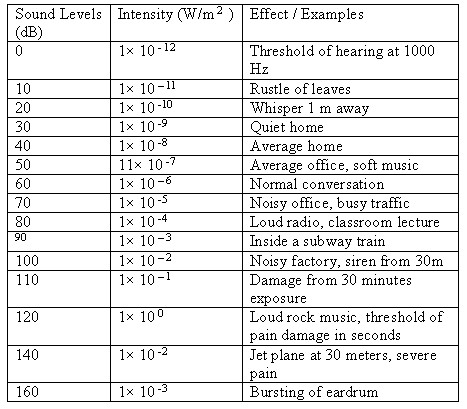 Sound level is not the same as intensity. Sound level Β is defined is a ratio, and is therefore a unit- less quantity used to compare sound level to a fixed standard 10 -12 W/m 2

Essential Questions : What happens when a moving source approaches or exceeds the speed of sound?

Sounds from a source that moves faster than the speed of sound spread out spherically from the point where they are emitted. When the source exceeds the speed of sound no sound is received by the observer until the source is passed. Both the approaching sound and the receding are mixed. This is situation creates a sonic boom. A sonic boom is a constructive interference of sound created by an object moving faster than sound. This can be represented geometrically by a cone in three dimensions with overlapping circles. Inside the cone the interference is mostly destructive, and the sound intensity is less than on the shock wave.

a.) discuss sonic boom
b.) Explore movie from the internet that demonstrate sonic Boom

The task: Students will research and make a presentation on Sonic Boom.

Objectives : Students will be able to:

a.) Describe the causes of Earthquakes
b.) Identify regions most prone to earthquakes
c.) Apply the study logarithm to the forces of earthquakes.

The magnitude of earthquakes is measured on the Richter scale. The Richter magnitudes are based on a logarithmic scale. Each successive unit is ten times more powerful than the one before.

A seismometer is an instrument that senses the earth’s motion. The seismograph combines a seismometer with recording equipment to obtain a record of the motions of the earth. From this graph scientists can calculate how much energy is released in an earthquake. Seismograms are placed at different positions, some close to the earthquake and some at greater distances. The readings from all these positions are used to calculate the magnitude of the earthquake. Usually all the seismograph stations will give the same magnitude for an earthquake.

Select problems that give practice in the properties of logarithms, but are applied to earthquakes.

1. The energy E (in ergs) released during an earthquake of magnitude R may be approximated by using the formula

a.) Solve for E in terms of R
b.) Find the energy released during the Alaskan quake of 1964. The earthquake measured 8.4 on the Richter scale.

Objectives : Students will be able to:

a.) Find the intersection of circles
b.) Measure distances
c.) Apply the data generated from a seismograph to locate an earthquake.

Finding the Epicenter of the earthquake

Since S waves travels much slower than the P waves, the arrival of their movements are detected and recorded after the P waves. The farther away from the epicenter of the earthquake the instruments are located the longer it will take to record the movements of the P and S waves. Scientists know the speed at which both types of waves travel through their respective medium. The time lag between the arrival of the P waves and the S waves is then used to calculate the distance of the earthquake’s epicenter from the location of the instrument.

How the Location of the Epicenter is done.

a) For geometry students can use graph paper and a compass to (using a scale) locate the epicenter of a earthquake.
b) Students can research the seismograph its origin and how it works and their locations.
c) Apply distance time problems