The water, or hydrologic, cycle describes the movement of water as water molecules make their way from the Earth’s surface to the atmosphere and back again, in some cases to below the surface. This gigantic system, powered by energy from the Sun, is a continuous exchange of moisture between the oceans, the atmosphere, and the land.

All water in the world is part of the hydrologic cycle – a bottle of water you just bought at the supermarket, a drop of morning dew glistening on a spider web, a rushing river, or a snowball you are about to throw. People don’t make new water to sell, they simply take water from one place, such as a river or lake, clean it (we hope), and put it in a fancy bottle. The total amount of water in the system does not change. Annual water loss from the surface of the earth is equal to the total annual precipitation.

The hydrologic cycle includes the following components and showing in Figure 1:

Precipitation: Water falling to the Earth from the atmosphere in the form of rain, snow, sleet, or hail.

Surface Runoff: Water that hits the Earth and then moves along the top of the land surface via streams and river.  Surface runoff carries materials from land (soil, etc.) with it.

Evaporation: Water changing from a liquid to a gaseous state (water vapor). This requires a source of energy – usually, the sun – and results in cooling of the evaporative surface. Water vapor subsequently rises from oceans, rivers, lakes, soils, and vegetation into the atmosphere.

Condensation: Conversion of gaseous water (water vapor) to a liquid (droplets) or solid (crystals) state. This takes place when warm, moist air is cooled, either by the air itself cooling or when it comes in contact with cool surfaces. Tiny water droplets or ice crystals then coalesce to form the visible drops or flakes we see in clouds.

The components of the water cycle – atmosphere, surface water, and groundwater – are linked over “a variety of spatial scales (meters to thousands of kilometers) and temporal scales (days to millions of years).” 3 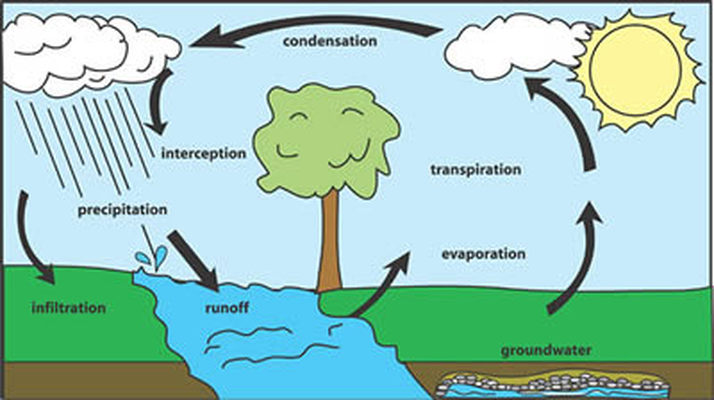 Figure 1: Components of the Water Cycle