The Science of Ghana

Section 2: Forces of Nature that Influence the Climate, Weather, and Food Sources of Ghana

The sun radiates hundreds of thousands times more energy than the earth and provides energy to the earth in the form of heat and light through mostly visible wavelengths. About 30 percent of the sun’s rays are reflected back into space, and the remaining energy is distributed to the Earth’s surface. However, the sun’s energy is not distributed evenly across the entire planet. The equator and the low latitude areas of the tropics receive most of the sun’s heat, which is pushed toward the poles due to global atmospheric convection. Beginning approximately at the tropics of Cancer and Capricorn, between 32 and 35 degrees latitude, the Earth begins to lose more heat than it gains at the surface. Heat loss increases at higher latitudes, moving toward the poles. (Abbott 2004, 19-22)

Convection is created when air is heated, causing it to become less dense and therefore lighter. Heated air rises, and pulls air off the ground and pulls air from nearby as well. Therefore, it creates low pressure near the ground. As the hot air rises, it expands, loses its heat, and becomes denser once again. If the air is moist, the cooling causes moisture to condense into cloud droplets and then eventually rainfall. After the air cools and becomes denser, it sinks back down, hits the ground and creates a high pressure zone as the air pushes against the ground and forces the surrounding air away from it. (Encyclopedia Britannica, 2008.)

The differences in heat between the tropical latitudes and the polar latitudes create important ocean currents and winds that bring heat from the tropics toward the poles. Meanwhile, the high pressure of the cold air at the poles creates movement of air away from the poles. (Abbott 2004, 22 )

However, the air does not flow in a straight line over the Earth. This is because of the Coriolis Effect, which states that the air moves at much higher speeds at the equator than at the poles, since the globe is widest at the equator. Since the Earth rotates to the east, the air is also moving east. It moves fastest at the equator, slower at the tropics, and barely moves at the poles. This creates a large scale movement of air that is pushed off course as cooler air from higher latitude moves into the faster moving air near the equator, which effectively moves the warm air west as it collides. In the northern hemisphere, this creates movement south and toward the right of its original path as it gets closer to the equator, as in Figure 1. Likewise, moving masses of air and water from the south pole head north toward the equator and are pushed to the left of their original paths. (Abbott 2004, 274-277) 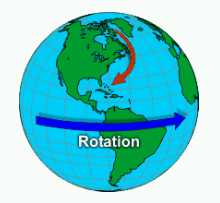 Figure 1: This shows how air moving south from the north pole toward the equator is deflected to the right of its path due to the rotation of the earth. (Source: National Weather Service, 2007)

This can easily be demonstrated in the classroom with a chalk, a globe, and two people with steady hands. One person should be instructed to turn the globe in the direction of the earth’s rotation, (counter clockwise if you’re looking at it from above the north pole). A second person should be instructed to use chalk to draw a straight line down from the north pole to the equator at a steady speed. The line will not be straight, but will curve to the right of its path downward, or southwest on the globe. This is because the spot directly beneath the starting point, which the chalk would have touched if the globe were standing still, will have moved by the time the chalk line reached the equator. This can also be demonstrated with a turntable and a ruler, as in figure 2. (Robinson: National Weather Service)

Figure 2: This shows the effect of using a ruler to make a straight line on a moving circle. (Source: National Weather Service, 2007) 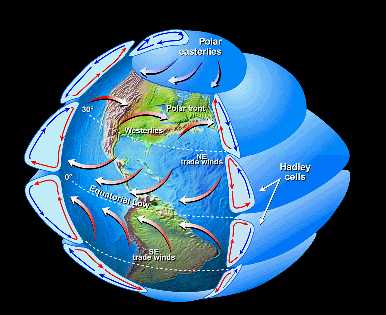 Figure 3: This illustrates the movement of winds created by global convection as it is affected by the rotation of the earth. (Source: www.nasa.gov)

This creates strong winds between the tropics and the equator called the trade winds. The trade winds control the weather of the land located within these latitudes, such as Ghana. Since the air cooled at the tropics has lost most of its moisture, the air is relatively dry, which creates the dry weather typical of regions at this latitude, between 20 and 30 degrees, such as the Sahara desert. The Trade Winds carry hot, moist air that has yet to release the moisture, creating the warm, humid climate that is typical of locations close to the equator. Since the air remains within the warmest part of the Earth, the seasons do not create great variations in temperature, but remain warm all year. (Abbott 2004, 275-277)

The movement of the humid tropical air mass and the dry harmattan air mass by the trade winds is easier to understand when considering the effect of Ghana’s proximity to the Atlantic Ocean. As the sun’s most intense rays move north of the equator, the effect is similar to a sea breeze. A sea breeze is wind caused by a difference in air pressure created by the heating and cooling properties of the land and sea. (National Weather Service, 2008)

During the day, the sun heats the land more than the water, because of the water’s depth and transparency. The warm air over the land rises due to convection. This creates a warm low pressure area at the surface of the land due to air being drawn into an upwelling like a vacuum cleaner. The upwelling air reaches a height where it begins to move off to the side, over the ocean, and cools. It eventually sinks, where it hits the ocean surface where it is a high pressure zone and the moist ocean air is pushed back toward the warm upwelling low pressure zone over the land. The circular movement of the air can be seen in Figure 4. 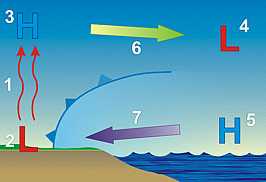 This process is reversed at night because of the more rapid cooling of the land compared to the water, (which is a result of the water having heated to a much more significant depth). At night, the warm air over the ocean begins to rise and creates low pressure over the ocean. Air moves from the land toward the sea and is called a land breeze. (National Weather Service)