The solar system is comprised of planets that orbit around a star. Our solar system consists of eight planets and three dwarf planets that orbit around the sun. The order of the planets is as follows: Mercury, Venus, Earth, Mars, Jupiter, Saturn, Uranus, and Neptune. The dwarf planets are Ceres, Pluto and Eris. The first four planets are known as the terrestrial planets because they are made of solid, rocky material. They are dense, have few or no moons, no rings, and are composed of minerals with high melting points. The last four planets are known as the gas giants because they are much larger and comprised of gases.

Unlike rocky planets, which have a clearly defined surface, gas giants do not; their
atmospheres simply become gradually denser toward the core, perhaps with liquid
or liquid-like states in between 1 .

These planets also have many satellites and rings. The planets orbit around the sun in an elliptical, or oval, shape, of which the sun is one of the foci.

The sun is the star that is central in our solar system and is classified as a large yellow dwarf. This classification is based on its brightness and surface temperature. It is believed that the sun has not yet exhausted its store of hydrogen and therefore still has many years left to give heat to our solar system 2 .

Mercury is the smallest planet, located closest to the sun. It is 4,878 km in diameter and is 57,900,000 km from the sun. It takes 1392 hours for Mercury to complete one rotation and 88 days for it to travel completely around the sun. The surface temperature varies greatly due to Mercury’s extra thin atmosphere and complex orbit. It can reach 350 degrees Celsius during the day and get as cold as -170 degrees Celsius at night. Mercury has no satellites.

Mercury’s surface is a grayish color and consists of many craters and cracks. It does have an area of plains that may have been an ancient area of volcanic activity 3 .

It was thought for a while that Mercury had no atmosphere, but it has been discovered that Mercury does have an atmosphere, though extremely thin 4 . This atmosphere is unstable, consisting of atoms being constantly lost and replaced by various sources such as solar winds and radioactive decay. It contains hydrogen, helium, oxygen, sodium, calcium and potassium.

Mercury’s orbit is the most eccentric of all the planets, meaning that its orbit is off center. Its apoapsis distance, or farthest point from the sun, is 70,000,000, while its periapsis distance, or closest point to the sun, is 46,000,000. This is the cause of Mercury’s highly varied temperatures. Mercury’s speed of orbit is not constant; it moves faster when it is closer to the sun and slower when it is further away. Figure 5 shows Mercury’s orbit in yellow and orange on top of a circular obit with the same semi-major axis. The image demonstrates the eccentricity of Mercury’s Orbit. 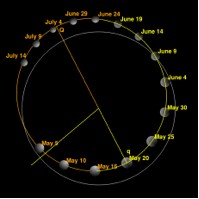 Comparatively less is known about Mercury than other planets because of its close location to the sun. NASA recently launched a mission to Mercury called MESSENGER that left on August 3, 2004 and completed a fly-by of Mercury on January 14, 2008. Two more fly-bys are scheduled in the coming years and in 2011 a probe will be launched into Mercury’s orbit to learn more about this little planet.

Venus is the second planet from the sun and is part of the group of terrestrial planets. It is 108,000,000 km from the sun and is 12,102 km in diameter. It takes 5,832 hours or 243 days to complete one rotation but rotates in a retrograde motion, opposite that of other planets. It takes 225 days to revolve around the sun. Although, Venus’ orbit is elliptical, like all planets, it is the closest to being circular. The surface temperature is hotter and more stable than that of Mercury, ranging from 400 to 700 degrees Celsius. Venus has no satellites. 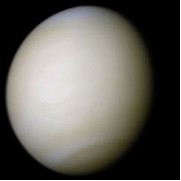 The surface of Venus is very dry and rocky with few craters. It consists of mostly rolling plains formed from volcanic activity. It has very dense atmosphere made up of mostly carbon dioxide. There are many layers of thick clouds that consist of sulfuric acid. Lightening storms are common at this level. The atmospheric pressure at the surface is over 90 times of that on earth, but it is calm, as there is little wind. The surface of Venus has been volcanically active, though no evidence of lava flow has been found 5 .

Earth is the third planet from the sun and the only known planet that contains liquid water or life. It is 149,600,000 km from the sun and 12,756 km in diameter, the largest of the terrestrial planets. It rotates in 24 hours and takes 365 days to revolve around the sun. The temperature ranges from -90 to 60 degrees Celsius. It has one satellite, called the moon. From space it has appears blue and white due to the oceans and clouds. 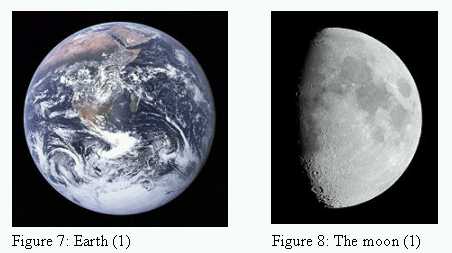 Earth’s satellite, the moon, orbits around the earth about every 27 days. The moon has a diameter of 3,475 km, about one-quarter of that of the earth. The moon affects many parts of Earth. The most obvious is that the moon causes tides in the oceans. It is thought that the reason that Earth tilts only so far and not further, is due to tidal interactions with the moon 6 . This prevents a rotation that would approach the plane of the ecliptic, where the axis would be horizontal, with one pole directly facing the sun and the other directly away from it. This kind of scenario would result in extreme heat at one pole and extreme cold at the other. The moon, however, stabilizes the axial tilt.

Mars, the fourth planet from the sun, is the last terrestrial planet. It is 228,000,000 km from the sun and its diameter is 6,786 km. It has a reddish color due to oxidized iron minerals, or rust, on its surface.

It has a rotation practically equal to earth, at 24.5 hours long, but its orbital revolution is practically double at 1.88 years or 686 days long. The surface temperature ranges from -140 to 20 degrees Celsius. Mars has two satellites, Phobos and Deimos, named after characters in Greek mythology. 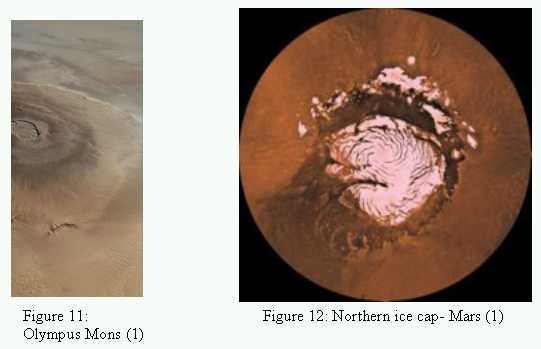 Jupiter, the first of the gas giants, is 778,000,000 km away from the sun, more than three times as far as Mars. It is the largest planet in our solar system, with a diameter of 142,980 km. Jupiter’s mass is more than two and a half times more than that of all the remaining planets combined. It completes one rotation in about 10 hours, though the atmosphere at the equator rotates faster than at the poles 8 . It takes 4,343.5 days or 11.9 earth years to revolve around the sun. The temperature on Jupiter averages -110 degrees Celsius. Jupiter has at least 63 satellites, four of which, known as the Galilean moons, are quite large 9 . 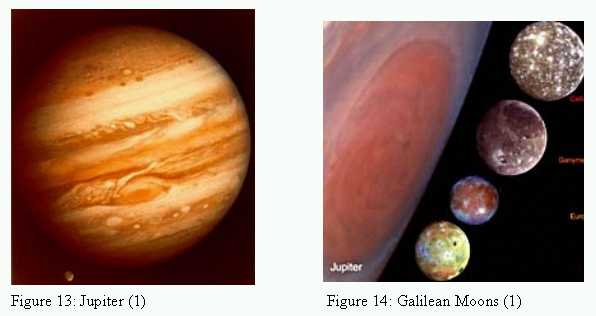 Jupiter appears to be an assortment of different browns, tans, reds, and yellows. The atmosphere is separated into sections, or bands, that rotate in different directions around the planet. The lighter bands are called zones , while the darker bands are labeled belts . These winds cause storms and turbulence within the atmosphere. Jupiter is famous for its “Great Red Spot”, which is thought to be a huge storm, larger than the diameter of Earth. The clouds of Jupiter’s atmosphere are made up of ammonia crystals and possibly ammonium hydrosulfide 10 . 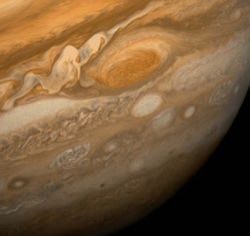 Jupiter, like all of the gas giants, has a ring system, and it is divided into three sections. The rings are probably made out of dust and particles, not ice, like those of Saturn. The first layer is called the inner torus (halo). The second is the main ring and is very bright. The final ring is known as the outer gossamer ring. The rings of Jupiter are very broad, but very thin.

Twice as far out as Jupiter, sits Saturn, the planet known for its rings. This planet is located 1,430,000,000 km away from the sun and has a diameter of 120,540. Saturn is the least dense planet; it is even less dense than water. It completes one rotation in 10.5 hours, though different parts of its atmosphere rotate at different rates, just as on Jupiter. It takes 29.5 years or 10,759 days for Saturn to orbit around the sun. The average temperature on Saturn is -180 degrees Celsius. At least 60 satellites have been discovered orbiting Saturn, including one named Titan that is larger than Mars 11 !

From space, Saturn appears to be various shades of yellow and brown, and is also divided into bands as Jupiter. Saturn experiences storms similar to Jupiter that are caused by the turbulence between the bands moving in opposing directions. Saturn experiences very high winds that can reach up to 1,800 km/hr. The upper layer of clouds in the atmosphere is composed of ammonia crystals and the lower is composed of ammonium hydrosulfide or water 12 . The poles are made up of water ice.

The rings of Saturn are quite expansive; they have a diameter of 270,00 km, but are only a few meters thick. They are comprised of mostly ice particles with small amounts of debris and dust. The rings are separated into different sections. 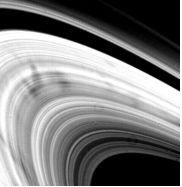 Uranus is located 2,870,000,000 km away from the sun; twice the distance of Saturn. Its diameter measures 51,118 km across. It revolves in 17.2 hours and orbits around the sun in 30,660 days or 84 years. The temperature on Uranus is -216 degress Celsius. Uranus was the first planet to be discovered in modern times by use of a telescope. It was viewed by Sir William Herschel in 1871. It is known to have 27 satellites in its orbit 13 . 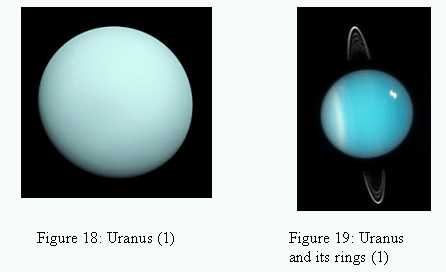 Uranus appears a greenish-blue color due to the scattering of blue light and the absorption of red light by methane gas 14 . Uranus is composed of hydrogen and helium, like Saturn and Jupiter, but it contains a much higher proportion of ices (water, ammonia and methane). For this reason, Uranus, along with Neptune, is sometimes referred to as an ice giant 15 .

Uranus, unlike any other planet in our solar system, has an extreme tilt to its axis. The axis tilts as much as 98 degrees causing its poles to point directly at the sun. One pole will experience 42 years of sun and then proceed to experience 42 years of darkness. The satellites also follow this tilt and orbit around Uranus in a vertical manner. Uranus also spins in a retrograde manner, as does Venus.

The rings of Uranus are narrow and faint, only about ten meters in diameter. There are believed to be 13; the inner rings are grey, while the outermost ring is blue and the next outermost is red. 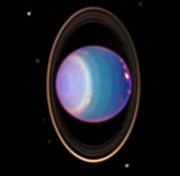 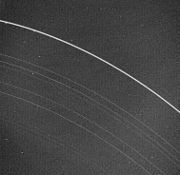 The last planet in our solar system, Neptune, is located 4,500,000,000 km from the sun. It is 49,528 km in diameter and takes 60,225 days or 165 years to travel around the sun. Neptune’s differential rotation is the most pronounced out of all the planets 16 . The atmosphere around the equator rotates in about 18 hours while the polar regions complete a rotation in only 12 hours. These are both different from the rotation of the magnetic field, which rotates in about 16 hours. The temperature on Neptune is -216 degrees Celsius, which is similar to the temperature on Uranus. The temperature is very similar because Neptune itself emits much energy and is able to heat itself, whereas Uranus does not radiate nearly as much energy as Neptune 17 . Neptune has 13 known satellites.

Neptune, as Uranus, can be known as an ice giant because it is composed of larger amounts of volatiles, or ices, such as methane and ammonia. Its atmosphere has bands, as do the other giants and Neptune experiences the strongest winds of any planet at 2,100 km/hr. Neptune has rings but they are few, thin, and unstable 18 . 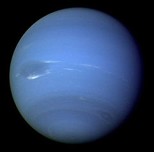