Geomicrobiology: How Microbes Shape Our Planet

"What is needed to sustain life" with emphasis on life underground

Plant Life and the Carbon Cycle

The building and maintaining of our classroom terrarium will demonstrate the interaction between organisms and their surrounding environment, and serve as an introduction to the carbon cycle. This cycle is the biogeochemical cycle by which carbon is exchanged among the biosphere, pedosphere, geosphere, hydrosphere, and atmosphere of the Earth. It is one of the most important cycles of the earth and allows for carbon to be recycled and reused throughout the biosphere and all of its organisms. Plants, animals, and soil interact to make up the basic cycles of nature. 6 In the carbon cycle, plants absorb carbon dioxide from the atmosphere and use it, combined with water they get from the soil, to make what they need for growth. The process of photosynthesis incorporates the carbon atoms from carbon dioxide into sugars. Animals eat the plants and use the carbon to build their own tissues. Other animals eat these animals and then use the carbon for their own needs. These animals return carbon dioxide to the air when they breathe, and when they die, since the carbon is returned to the soil during decomposition. The carbon atoms in soil may then be used in a new plant or small microorganisms. Ultimately, the same carbon atom can move through many organisms and even end up in the same place where it began. 7 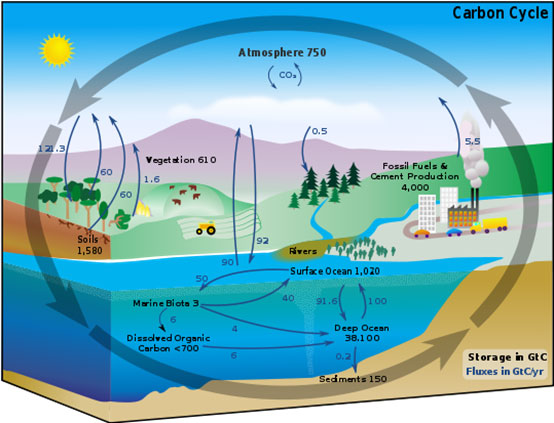 Aquarium Life and the Nitrogen Cycle

Three of the most important water chemistry parameters are ammonia, nitrite, and nitrate concentration. These chemicals are important because ammonia and nitrite are both very toxic to aquatic life, even at low concentrations. Nitrate, while much less toxic than either ammonia or nitrite, is toxic at high concentrations. More importantly, it is a great plant nutrient and thus causes algal blooms (even in your aquarium-algal overgrowth common). Most cases of green water are due to having huge amounts of nitrate (and phosphate) in the system. The best way to manage these potentially dangerous chemicals is to understand the nitrogen cycle, since this is the best tool for ammonia and nitrite removal.

All nutrient inputs into the system stay in the system unless they are removed by water changes or take on the form of gases like CO 2 that can escape into the atmosphere. The nutrient inputs (the proteins, carbohydrates, and fats in fish food) ultimately end up as ammonia (primarily from proteins). Whether the food is eaten by fish and expelled as urine and excrement, or simply decomposed in the gravel by nitrifying bacteria, ammonia is the end result. Without an active biological filter, food will lead to a rapid accumulation of ammonia. 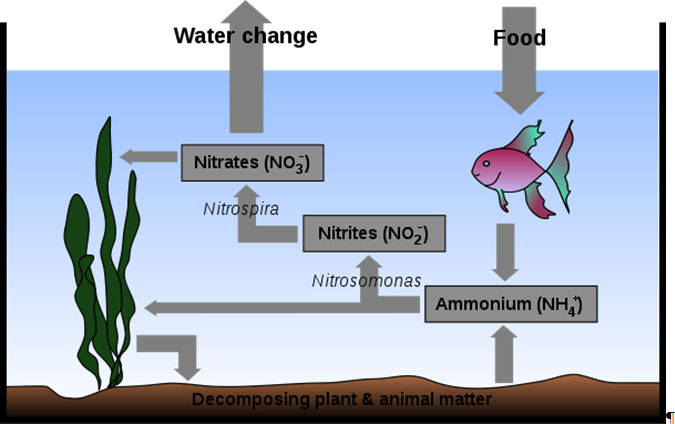 Food put into the system will go directly to ammonia as fish waste, or if left uneaten, will be decomposed to ammonia. The ammonia will then be broken down by ammonia oxidizing bacteria (Nitrosomonas) to nitrite. Nitrite is further oxidized by nitrite oxidizing bacteria (Nitrobacter/Nitrospira) to nitrate. Both ammonia and nitrate are taken up by plants. This means that plants are an excellent means of controlling both ammonia and nitrate. Unfortunately, nitrate also feeds algae. Plant and algal debris falls to the bottom of the tank where it is decomposed to ammonia and the cycle continues. Water changes remove all of these things from the water, and dilute whatever remains. 8

In our classroom terrarium, worm environment and our ant farm, there will be microbes busy as well. If soil did not have microbes hard at work, the truth is we would not be alive! The work they do in our soil is quite complex, but the basics are if microbes eat, we eat! Plants are unable to take from the soil the nutrition they need without microbes working in the soil. Microbes consume the foods/nutrients they need and create nutrients like nitrogen, carbon, oxygen, hydrogen, phosphorus, potassium, and minerals for our plants. And it is the microbes that convert the nitrogen, phosphorus, potassium, and minerals in the soil into a form our plants can use to grow and produce food.

When living organisms that use oxygen feed upon organic matter, they develop cell materials from the nitrogen, phosphorus, some of the carbon, and other required nutrients. Carbon serves as a source of energy for organisms and is burned up and respired as carbon dioxide (CO 2 ). Generally, organisms respire about two-thirds of the carbon they consume as CO 2 , while the other third is combined with nitrogen in the living cells. 11 Ratios of needed nutrients are roughly: C:N:P at 106:16:1, this is called the Redfield Ratio.

Several cycles of organisms are required to burn excess carbon. This is a complex chemical process. When organisms die, their stored nitrogen and carbon become available to other organisms. These new organisms form new cells which again need nitrogen to burn excess carbon and produce CO 2 . Thus, the amount of carbon is reduced and the limited amount of nitrogen is recycled. This is amplified 16x in the case of phosphorus (P). When the ratio of available carbon to available nitrogen is low enough, nitrogen is released as ammonia. Under favorable conditions, some ammonia may oxidize to nitrates.

In nature, aerobic decomposition or burning of carbon is common in areas such as the forest floor, where droppings from trees and animals are converted into relatively stable organic matter. The products of aerobic decomposition do not smell when adequate oxygen is present. When oxygen is not present, such as in deeper layers of the soil or compost heap, decomposition of organic matter still occurs by the process of fermentation. We can try to imitate these natural systems when we plan and maintain our landscapes. As we learn more about the biology and chemistry of composting, we can actually hasten the decomposition process. 9

When carbon/organic matter is oxidized to CO 2 , energy is released as heat. There are many different kinds of bacteria at work in the process but the primary players are--heterotrophs and fermenters.