The Sound of Words: An Introduction to Poetry

Multiculturalism, Language and Poetry: Exploring These Avenues through the Sound of Words

¡Hola! My name is Chelcey Williams and I am a second/third grade bilingual teacher in the New Haven Public School system. I am interested in creating a project geared for English Language Learners because I've been working with them for the past three years, and it is clear that English Language Learners (ELLs) have a different set of needs in terms of learning when it comes to working with them in the classroom. I feel that there aren't enough resources available for teachers to use the correct strategies to teach ELLs. Both research and experience in the classroom have shown us that more and more of our students are English Language Learners. To be successful teachers in educating these students with diverse backgrounds, we need know what their special needs are, as well as have the training to teach them in a way that they can learn.

When ELL's come into our classroom, they feel anxious about meeting the new teacher, and they wonder whether if the teacher will understand them. They may be thinking in their native language, and if the teacher is speaking English fast and not giving visual cues about what they are saying, the ELL students will immediately start to feel anxious. If teachers had the training in working with ELLs, then they would teach from day one with these students in mind. They would limit their speech to simple vocabulary and use as many visual cues as possible to communicate their ideas. Doing this would allow ELLs to feel more comfortable, valued and important in classrooms, which would thus lead to greater academic success.

There are many little things that can be done to advance the success of ELLs, such as the teacher slowing her speech. Another small thing that can be done to help ELL's in the classroom is to allow them to speak their native language to clarify understanding. Believe it or not, even today there are teachers who do not allow students to speak their native language in the classroom for one reason or another. Allowing students to speak in their native language to clarify understanding increases learning and ultimately their educational goals. Echevarría, Vogt and Short state that allowing students to speak in their primary language for clarification, as well as provide many other classroom modifications will ensure the academic success of ELLs, and this unit compliments their suggestions. This unit is specifically designed so that students can utilize their native language to compare and contrast different poems and languages. This allows them to use what they know to learn something new. Sonia Nieto states that students use their primary language (or L1) to build their secondary language (L2). Having students do activities that use their primary language to build their second and even third languages are the building blocks of language success.

In addition to this, the United States is the only country that does not require students to learn more than two languages. Yes, the expectation now is that students study a second language by the time they graduate high school, but other countries, such is India require students to learn to read, write, and speak in their primary language, English and a third language! This poetry unit I believe can be a stepping stone into having students strengthen their primary language, learn English, as well as establish a foundation of sounds in other languages. Should they want to be more proactive and seriously take up a third language when they are older, they would at least have experience with activities in this unit to build upon.

Multiculturalism is an important issue to recognize, understand and acknowledge in the classroom to relate with ELLs. Dictionary.com's definition of culture is "the behaviors and beliefs characteristic of a particular social, ethnic or age group". The anthropological definition of culture is "the sum total of ways of living built up by a group of human beings and transmitted from one generation to another." Now to put everything together, multiculturalism means "the state or condition of being multicultural," and "the preservation of different cultures or cultural identities with in a unified society, as a state or nation." It is very important that teachers recognize and celebrate the different cultures that students come from, and this as a great unit to do just that. Just as it is important for students to speak their native language, it's important for them to be able to make reference to their distinctive cultures as well.

Research done by Daniéle Moore (2006), indicate that students have the ability to use their primary language to comprehend, build and understand a new/second language, however if schools, specifically teachers weren't trained to recognize and utilize this ability, students will not use this skill when it came to learning and comprehending in a new/second language. Moore further states that, "[the study] advocates the promotion of plurilingualism through school education." (2006, p. 136). This study encourages the creation and use of a program such as the one described in this unit.

I had an interesting experience working with a bilingual classroom my second year teaching. My bilingual class walking in the hallway as the regular education class was returning to their classroom. They stared at my students like they were aliens! It was like they never saw students of color before. Don't get me wrong, my students stared at them like they were "aliens" also, but I noticed that encounter and decided to reflect on that, pondering why that had even happened in the first place. The only conclusion I was able to come up with was that both groups of students lacked experience with interacting with others from a culture different from their own. This unit will allow students to experience poetry from different cultures and practice reading, writing and speaking a language different from their own.

The reason why I chose to focus on language specifically, and not focus on multicultural traditions is because language is the number one challenge that English Language Learners have with being successful academically. The need to have a good foundation of the English language in order, to read, write, listen and speak correctly and appropriately in all subject areas. If there is not a strong English language foundation, there will not be much success in having students learn what they need to at each grade level. The reason why I'm choosing to use many different language besides English in this unit is so that students can practice using their primary language to get a sense of understanding of other languages and their sounds. When we teach Kindergarteners how to read and write in English, we begin with letters and their sounds. We will be using that same concept in this unit so that students will become familiar with different languages and their sounds. Now, it can potentially be a bit difficult for some students to make the connection of how sounds make up different languages and how some sounds are both the same and different in their primary language. But even though there is that possibility of confusion between the different languages, it can be a wonderful opportunity to solidify the sounds in their own language so that they are able to better learn a second. Baker (2006) states that students with a strong L1 (primary language) will be more successful in developing their L2 and L3 (secondary and tertiary languages).

One of the important goals of this unit is to build tolerance, respect and empathy for different people and their culture. This is very important because prejudice against certain groups is often expressed as a prejudice against their languages. But if students are exposed to different languages, they will have had experience and hopefully empathy for them because they will realize that even though people speak different languages, there are a lot of similarities, specifically sounds, among them all. This unit would be a very useful tool for English Language Learners and NOT waste valuable class time because they would be practicing the pragmatics of language. Building a strong foundation in language will allow students to transfer their skills into all subjects and be successful.

Poetry is the topic being used in this project. The reason why poetry was chosen as the center of this project, as opposed to science or reading a regular story, is because poems paint pictures with words, and not many words have to be used to paint that picture. ELLs are constantly translating what people are saying to their native language, and the less words used to communicate an idea, the better. Poetry aids with comprehension, memorization, and makes a connection to an expressive form students are already into. What I mean by that is students are into the latest music, dances and rap songs that are on television and the radio, and they can literally repeat all of the songs that are currently being played.

From my experience of studying bilingual/multicultural education, this activity has never been suggested or done before. The reason why I think this would be a good, productive and fun project to complete, is because it never HAS been done before and students are able to use what they know to learn what they don't. Each poem will be presented in its original language and in English translation. The unit consists of 5 poems and can be done consecutively or over a long period of time. The first two poems are Spanish poems, followed by a Portuguese poem about butterflies. The third poem is an Italian poem also about butterflies, followed by a Japanese poem about a snowman. These poems were put in this specific order so that Spanish ELLs could practice working with sound in their primary language, followed by another language that has similar words and sounds. The third poem, an Italian piece is also very similar to Spanish and Portuguese, and also has the same topic of butterflies. Students will be easily able to do compare/contrast activities between the languages. The final language was chosen so that students are able to experience a language that is not similar to their primary Spanish language. They will get to practice saying words in another language and will have fun deciphering the similarities and differences in sound in the Japanese, their language as well as English. The order of all the poems in the unit follows a continuum of similar to different levels of comparison to their primary language of Spanish. Spanish the primary language of focus in this unit because the majority of ELLs in the New Haven public school system are Spanish speakers. 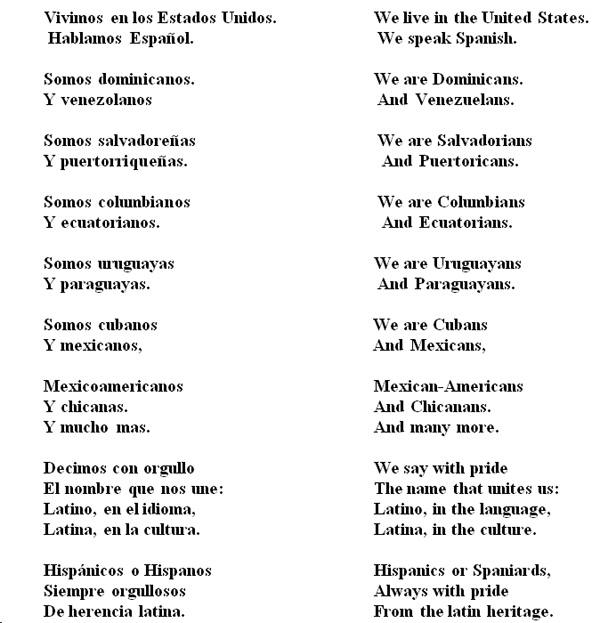 This poem is shown in the native language as well as in English. This is so that discussions can occur about how the poem in Spanish compares and contrasts. It can also be compared and contrasted to student's native language, which may be a different dialect of Spanish. All 5 poems follow this format. Having students work with poetry in this format will increase their sensitization to sound in different languages.