This phase of my curriculum unit will attempt to bring together the experience of looking at authentic pieces of artwork in the museum with the prior knowledge the students have now attained through sections 1 and 2. I will first introduce students to the purpose and means to make inferences, both in text as well as through illustrations and paintings. With the use of a graphic organizer I will explain to students how readers and observers make inferences or figure things out which are not directly stated in text by way of activating one's prior knowledge and being a 'good detective' when noticing important context clues. In this way, a character's emotions, thoughts and personality can be discovered or interpreted through inferential thinking.

I will reinforce this through texts like, Brave Irene by William Steig and Mr. Lincoln's Way and Pink and Say by Patricia Polacco, wherein students will use their prior knowledge along with clues from the illustrations and story context to make inferences regarding theme, character traits and author's message. Students will be given a graphic organizer wherein they write their inference in the center of a magnifying glass. However, they will be required to state the clues they found in the text as well as the prior knowledge they used to come to this conclusion about the character. The graphic organizer is set up so that they see the context clues and prior knowledge pieces as addends in an equation and the sum being the inference itself. Students will practice this with a variety of texts within the context of whole class, small group and individual readings so as to reinforce its usage across genres.

Once students have a handle on how to make inferences within text, we will move to a discussion of how to make inferences about a replicated piece of art from a section of our time period of study. We will begin by looking at a reproduction of The Spring Head of Roaring River , 1775 by George Robertson. Students will work with a partner to discuss their inferences. Similar to the exercise with text, students will be aided with a graphic organizer, which will require them to write down not only their inferences but, more importantly, the prior knowledge that led them to this conclusion as well as the visual cue in the painting which drew their attention. The graphic organizer might look something like this

In this way, students will be required to explain their thinking and support their claim with evidence. We will come together whole class to share the inferences partners discussed as a way to bring a broader sharing of ideas.

Over the course of a few weeks, I will show images, which reflect the historical time period as a means of giving students further exposure to the art, which was created in Britain and America between the mid 1700s and the early 1900s. In this way students will build upon their prior knowledge base by way of making connections and inferences about the artwork of this time as seen through their modern day perspective. Some images I will show on my ENO Board may include:

Am I Not a Man and Brother , emblem of the Society for Effecting the Abolition of the Slave Trade, 1787–90.

Description of a Slave Ship , 1789, unknown engraver for Plymouth Committee of the Society for Effection the Abolition of the Slave Trade., Beinecke Library

A Picturesque Tour of the Islands of Jamaica , by James Hakewill, Yale Center for British Art

Attack of the Rebels on Montpelier Old Works Estate in the Parish of S. James , the Property of Lord Seaford , 1833, lithograph with watercolor by Adolphe Duperly. Yale Center for British Art

The Power of Music , 1847 by William Sidney Mount, Cleveland Museum of Art

Prisoners from the Front , 1866 by Winslow Homer, The Metropolitan Museum of Art

The Gulf Stream , 1899 by Winslow Homer, The Metropolitan Museum of Art

Prior to embarking on our first visit to the Yale Center for British Art, I will discuss with students how looking at an authentic piece of art may give them an entirely new experience of art and invite them to share how the experience differs from our routine experience of looking at a digital replica. Upon our arrival to the museum, we will go directly to the Five Senses series by Phillip Mercier from 1689 or 1691–1760, wherein the artist has depicted figures engaging in activities, which highlight a particular sense. The conversational pieces are very telling of the time in which they were painted and therefore lend themselves well to telling the story of British history we have already touched upon.

The Sense of Hearing 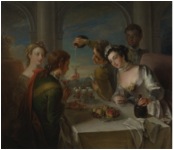 The Sense of Taste

The Sense of Smell

The Sense of Sight 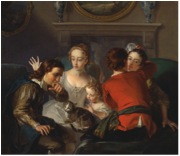 The Sense of Touch

I will put students into groups of four or five and engage them in the assignment of simply observing the painting for three to five minutes first and then writing down their observations, both inferential and technically informed in nature onto a graphic organizer. Students will rotate through each of the five paintings, spending 10–15 minutes in front of each painting. Once students have viewed all five paintings, I will instruct them to choose one or two characters from any of the paintings and give them a voice by way of creating a monologue for one character or a dialogue between two characters.

While focusing on these characters, my students will be called upon to suggest what these characters may be thinking, feeling and gesturing about. In this way, students will hone their skills in writing 'thought–shots', 'dialogue' and 'gestures'—all of which are crucial elements of narrative, which I have tried to introduce in the past through literature alone. In his book, Ways of Seeing , John Berger himself says, "No other relic or text from the past can offer such a direct testimony about the world which surrounded other people at other times. In this respect, images are more precise and richer than literature." (Berger, page10).

When we return to the classroom, students will have an opportunity to share their monologues and/or dialogues with the whole class as a way to allow peers to learn from each other's attempts at thinking inferentially and creatively. As students share, they will be asked to explain briefly what led them to create such monologues and dialogues for their characters in an effort to get students to identify the historical influences, gestural cues, facial expressions and subtleties which they picked up on and utilized.