Interpreting the Imagery of War

I have chosen the paintings in this unit in an attempt to represent a variety of different thematic and historical perspectives. Comparing paintings from different conflicts provides the opportunity to discuss how attitudes towards war have changed over time, and how they have stayed the same. These paintings also highlight a number of the contradictions identified by Tim O'Brien: ugliness and beauty, civility and savagery, honor and shame. 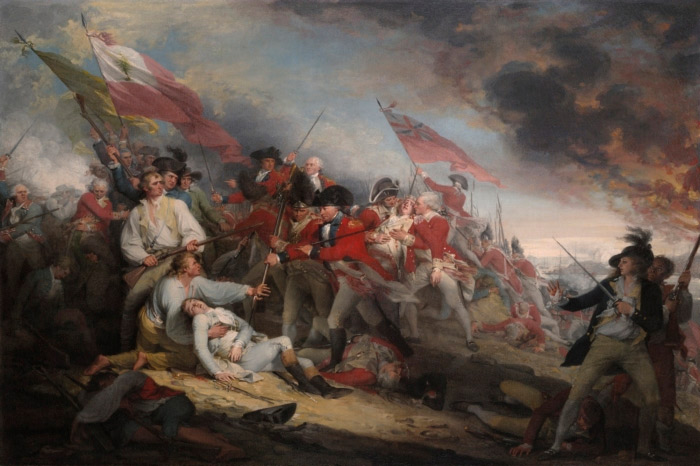 Styled after similar works by his friend and mentor Benjamin West, John Trumbull's The Battle of Bunker's Hill, June 17, 1775 , (1786, Yale University Art Gallery, Fig. 1) is a painting of heroic self–sacrifice and civilized combat. The subject of the painting is General Warren at the time of his death in the battle of Bunker Hill, once of the first major battles of the American Revolution. British infantry swarm up the hill from the right side of the painting in pursuit of the fleeing American forces fleeing on the left. Shot in the head, General Warren lies dying in his comrade's arms. Dressed in bright white clothing and illuminated by a spotlight from the heavens, the general is the focal point of the painting. His death is a spectacle, both for the viewer of the painting and for the characters it depicts; all eyes are on him. The position of General Warren's body, his bright white garments, and the imminent piercing of his side all reference images of Christ being removed from the cross, lending a sense of glory and moral distinction to his death. In dying, General Warren becomes a martyr for his country and its struggle for independence.

General Warren is not the only figure glorified in Trumbull's painting. His loyal comrade catches him as he falls, protecting him from a British soldier attacking with a bayonet. Also dressed in white, this character shows his dying commander a level of devotion one might expect from an apostle, the same measure of devotion General Warren gives to his cause. The commander of the British force also extends his protection to the dying general, holding off his soldier's bayonet in a gesture of mutual respect. The general's death not only inspires admiration in the eyes of his opponent, but also falls within the boundaries of civilized combat. Trumbull's painting not only glorifies General Warren and the cause he died for, but also honors the field of battle as a place of sacrifice, duty, and virtue.

The Retreat of Napoleon's Army from Russia in 1812

There are a number of similarities between Ary Scheffer's painting, The Retreat of Napoleon's Army from Russia in 1812 , (1826, Yale University Art Gallery) and John Trumbull's depiction of General Warren. Both paintings feature as their subject a defeated commander and his men. Both depict a large number of dead and dying soldiers. Scheffer finds his subjects in Napoleon's army during its disastrous retreat from Moscow. After a long and unsuccessful pursuit of the Russian army during the Napoleonic Wars, Napoleon's army was forced to retreat in the height of the Russian mud season, with winter fast approaching and its supply lines cut. The majority of Napoleon's army was destroyed by harsh weather, starvation, or enemy raids during the month long retreat to France.

One of the key figures in Scheffer's painting is placed in an almost identical position on the canvas as the figure General Warren, his body similarly supported in its dying moments. Despite these similarities, however, Scheffer provides us with a much darker image of war. Where Trumbull glorifies and civilizes the suffering of men at war, Scheffer reveals the intensity and shame with which they suffer. The upper half of the canvas is dominated by a dark mass of nearly indistinguishable soldiers in retreat and an ominous blue–black sky. The right side of the painting depicts a hellish scene as freezing soldiers attempt to warm themselves by a makeshift fire. These men suffer far more viscerally than any of the characters in Trumbull's painting: their blood smears in the stark white snow; their hands desperately stretch towards the fire at the edge of the frame; their faces are colorless, frozen, starving, lifeless. Where Trumbull gave us noble, dying gentlemen, Scheffer shows us shamed and suffering corpses.

Unlike the General Warren in Trumbull's painting, Napoleon Bonaparte is nearly indistinguishable, hidden among the dark, formless mass of soldiers in the middle of the canvas. While General Warren lies dying in glorious sacrifice for all to see, a nondescript Napoleon hangs his head in shame. In Scheffer's Retreat , General Warren has been replaced by another sacrificial figure, that of a young child. Presumably, this youth is one of the thousands of civilians who accompanied Napoleon's army into Russia in 1811. His position in Scheffer's painting is significant. Illuminated by the bright white of the snow, supported from behind with his arms outstretched, this youth is even more Christ–like than General Warren, but he represents a different sort of sacrifice entirely. Whereas General Warren's death is an honorable outcome of civilized combat, the youth in Scheffer's painting is a sacrificial offering to the savagery and horror of war. Like the blood stained snow on which he dies, he represents the innocence lost to the chaos and death around him. Where General Warren is to be glorified, the youth is to be mourned.

The final painting my students will discuss is John Singer Sargent's Gassed (1919, Imperial War Museum). Depicting the results of a mustard gas attack in the first word war, it acknowledges the scale of human suffering of World War I while raising serious doubts about the value of such a sacrifice. The painting itself is massive, stretching over twenty feet across. Sargent uses this expanse of canvas to capture the enormous human cost of war. He paints a sea of blinded soldiers, littering the foreground of the painting and stretching all the way to the horizon. Where Trumbull and Scheffer painted chaotic scenes full of action, Sargent shows us hundreds of men languishing as they wait for medical care. The scene is hazy and calm, and there seems to be little urgency or grand purpose in Sargent's Great War. Unlike the public spectacle of General Warren's death, the soldiers suffering in Gassed are largely ignored; ironically, a soccer game takes place deep in the background. The lack of attention these soldiers receive challenges heroic notions of war, and the central procession of men questions the wisdom of such a conflict. The blinded and bandaged men stumble cautiously through the soldiers lying at their feet. Assisted by a medical orderly, they lead each other towards medical relief somewhere off the right side of the painting. Through these figures, Sargent raises the idea of "the blind leading the blind," in this case towards a destination that remains unseen. In doing so he communicates a deep ambivalence concerning the meaning or purpose of war.

Scheffer's condemnation of war is a quiet one, but he respects the camaraderie of men at war. Although it depicts suffering on a grand scale, Gassed remains a surprisingly tender painting. The men are extremely vulnerable in their blindness, and they depend on each other completely. The physical connection between soldiers spans the entire length of the painting: those on the ground lay on top of each other; those standing in line clutch each other for guidance. While condemning the war at large and mourning the human suffering that results, Sargent celebrates the loving devotion of the men who suffer. There are no generals here, no grand and glorious displays of chivalry. There are however common soldiers who quietly bear the horrible cost of war. Ignored by the world at large, they have lost their ability to see where they are or where they are going, but they turn to each other for support and guidance. Sargent is able to find an honest beauty in the midst of terrible suffering and appreciate the tenderness and love between men at war.