An Introduction to Income Inequality in America: Economics, History, Law

Lesson 1:  What is Income Inequality?

Next, students will be presented with graphs that illustrate the uneven distribution of income in the United States.  Students can use the graph in Figure 1 to answer the following questions.  These questions are meant to assess their prerequisite knowledge of how to gather information from a bar graph, describe its shape, and draw conclusions accordingly.  Students will be asked to volunteer their answers out loud after. 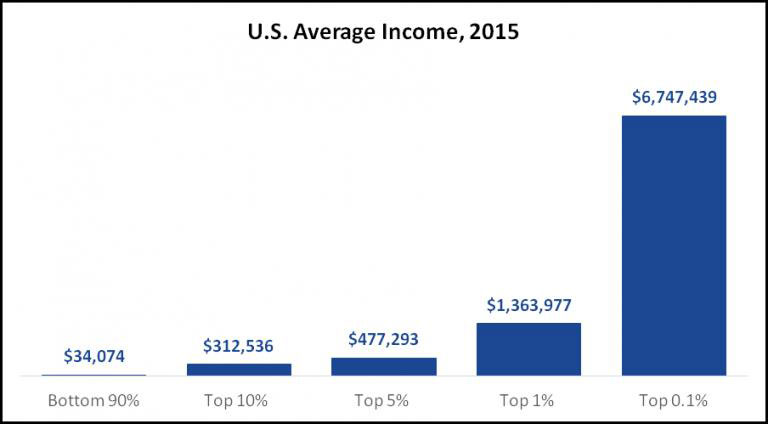 Figure 2 will expose students to a line graph. Students will use the graph to answer the questions during a whole-group discussion: 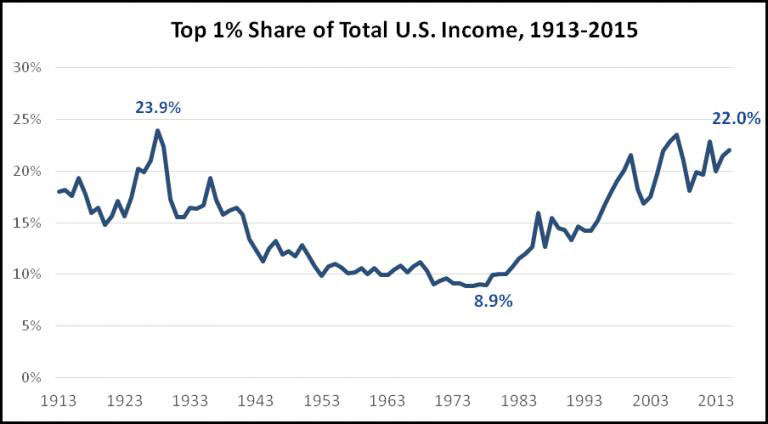 After examining both the bar graph and line graph, student will revisit the pie charts presented to them at the beginning of the lesson.  They will be asked if they would change their initial choice of the chart that reflects the income distribution in the United States.  Finally, they will be exposed to the correct chart (the pie chart that is most inequitable) via a PBS News Hour video called “Land of the Free, Home of the Poor,” which might surprise them. 38 Once the video is finished, students will be exposed to the class results for the pie chart poll.  They will then need to answer the following questions for a post-video discussion.

Students will be alerted to the fact that income inequality is a global concern as well as a domestic issue.  As a warm-up activity, students will be split into small groups.  Each group will be required to list as many possible causes of income inequality as they can.  Among the causes they list might be historical disenfranchisement of minorities, differences in education levels, and unfair compensation for labor.  The teacher might also need to use guiding questions to prompt students for the less obvious answers like technological growth, declining unionization rates, tax systems, or globalization.  Once students share their listings aloud, the teacher will need to explain that before we can alleviate income inequality, we need to know which factors contribute to the problem.  One of several ways to do this is to see which causes have a linear relationship with income inequality.  The method we will use to do this is called linear regression.

The teacher will need to walk the students through an example of a problem involving linear regression.  Suppose we want to come up with a model that can predict the average SAT math score of a state given the Gini coefficient of that state.  Suppose further that we want to know whether or not there exists a strong linear relationship between the Gini coefficient of a state and the average SAT math score within that state.  The teacher will first have to give students an overview of what a Gini coefficient tells us about the income inequality level of a specific location.  After, students will examine the data table below.

Students will be required to use the TI-84 Plus to determine the linear regression model, correlation coefficient, and coefficient of determination for the data.  They will be supplied with the following instructions:

When one follows the above procedure, one will obtain the linear regression model for the data:   = -709.60x + 86.76.  Students at this point should provide answers to the questions below.

Next, students can create a scatterplot of the data by following the instructions below.

Some questions to ask the students about the scatterplot are listed below.

The scatterplot for this data allows the teacher to address that in the real world, most data is not perfectly linear.  The correlation coefficient for the data is -.34, which indicates that a linear relationship exists between the Gini index and the average SAT math score of a state.  This linear relationship is weak, since the correlation coefficient is closer to 0 than it is to -1.  The regression equation tells us that for every one-unit increase in the Gini coefficient, the SAT math score of a state decreases by 709.60 points.  This is not exactly useful information considering the Gini coefficient cannot be lower than 0 or higher than 1.  The data equips the teacher with an opportunity to discuss extrapolation, the process of estimating the value of a variable or function outside an observed range.  If one tries to use the regression model to estimate the Gini coefficient of a state with an average SAT score of 650, one will discover that the estimated Gini coefficient is negative.  However, a Gini coefficient can never be negative.  The moral of the story here is that the usability of a linear model can be limited.  This data allows room for a discussion of confounding variables.  Some states (like Wisconsin or Minnesota) might have unusually high average SAT math scores because the SAT is not a required test for their students.  These states require the ACT instead, and those who take the SAT tend to be the most ambitious students.  However, when the correlation coefficient of a scatterplot indicates a strong linear relationship between an independent and dependent variable, the linear regression model can help us effectively make predictions given specific input values.

Another tool that allows us to assess whether a linear model is an appropriate fit for a data set is a plot of residuals.  A residual is the difference between the predicted y-value () and the actual y-value (y).  The residual plot is a scatterplot of each (x-value, residual) ordered pair.  A plot of residuals can be created quickly using the TI-84 Plus graphing calculator.  The steps, which will be reviewed with the students for the SAT example, are outlined below.

If all the points look randomly dispersed around the x-axis, then this tells us that a linear model is appropriate for our data.  Otherwise, another type of model (i.e. exponential, logarithmic, etc.) is a better fit.  The residual plot for the data is somewhat random, but does not resemble a cloud of points evenly scattered around the horizontal axis.  This plot is consistent with the correlation coefficient, which suggests that a linear relationship exists between the average SAT math score and Gini coefficient of a state.  However, this relationship is far from perfect.

After students are introduced to the graphing calculator functions associated with linear regression, they will work on a project that will have them picking a variable that potentially influences income inequality.  They will have to find data that quantifies this variable using a website such as the World Economic Forum or World Inequality Database.  They have the freedom to use data relating to states within the country or several different nations.  Their goal will be to find out if a linear relationship exists between the variable of their choosing and the Gini coefficient of a state or nation.  They will need to do the following in the form of a written report.

There will also be an oral presentation component to this project that should be no longer than eight minutes.  Students will be required to use some type of visual to summarize their answers to the focus questions.  This can be a PowerPoint presentation, video, poster board, or any other approved visual.  While students are presenting, their classmates will be required to fill out questionnaires describing any new insights or facts they learned from the presentation and explaining why they agree or disagree with the presenters’ proposals for alleviating inequality.

As an example of a project, students might decide to see if a linear relationship exists between a country’s minimum wage and the Gini coefficient of that country.  The group would be advised to select forty to fifty countries with varying levels of income inequality.  Then, they would have to research the minimum wages of these countries in United States dollars using a website such as the World Economic Forum to gather the data that they will analyze for their written report.  They would need to use the TI-84 Plus or statistical software to come up with the scatterplot, residual plot, regression model, correlation coefficient, and coefficient for the data.  They would be required to research policies or factors that have influenced the minimum wage in various countries.  They might decide to examine a graph of how the minimum wage in the United States has changed over time and compare to a similar times series graph for another nation.  Based on factors or policies that have affected the minimum wage in different nations, they would need to come up with their own proposal for increasing the minimum wage in countries where it is relatively low.