The American lobster, also known as Homarus americaus , lives in the cold waters of the Northeastern United States and Canada. 2,3 The American lobster are typically greenish brown in color, but other species come in blue, yellow, red, and white. 3 All lobster turn red once they are cooked. Inshore populations of lobster are harvested from Canada through New Jersey. 2 On the other hand, offshore populations are found from the Gulf of Maine through the Hudson River canyon.  While some mixing of these two groups does occur, they are considered to be separate populations.  The Long Island Sound offers both inshore and offshore lobster habitats, making its waters an important These inshore and offshore waters that surround Long Island Sound are an important to the lobster population as a whole. 2

Lobsters are very territorial and aggressive crustaceans that prefer to live alone. 3 When they feel threatened by assume a fighting position and wave their large claws. 3 While they live in a variety of different habitats they prefer places that have a rocky or soft mud surface, compared to sandy ones. 2 A lobster’s diet consists of slow moving bottom-dwelling shellfish including:  mussels, clams, sea urchins, starfish, worms, crabs, and even small fish. If food is extremely scares they are also known to resort to cannibalism. 3 They are nocturnal animals that avoid sunlight and burrow or find tiny rock crevices to spend the daylight hours in. 3

Lobsters live a long life and grow slowly by molting or shedding its shell. They reproduce typically in the summer or fall.  A female can produce up to 80,00 eggs at a time, but an average one-pound lobster produces about 8,000 to 12,000 eggs. 3 Each egg is about the size of a pin and when a female is covered in these eggs she is said to be “berried” because the eggs resemble a cluster of berries (Figure 1). 3 Only about 0.01% of the eggs produced by the female will develop and survive longer than six weeks. 3 Reproduction occurs when a recently molted soft-shelled female mates with a hard-shelled male. 2 The female will then fertilize the eggs about a year after mating. She will carry the eggs on her abdomen until they hatch the following spring or early summer. It is important to note that it is illegal for fisherman to catch and keep an egg-bearing female or any lobster that is too small. 3 Once hatched, the larvae go through a planktonic stage, which lasts for about a month, after which they will permanently settle to the bottom surface. 2 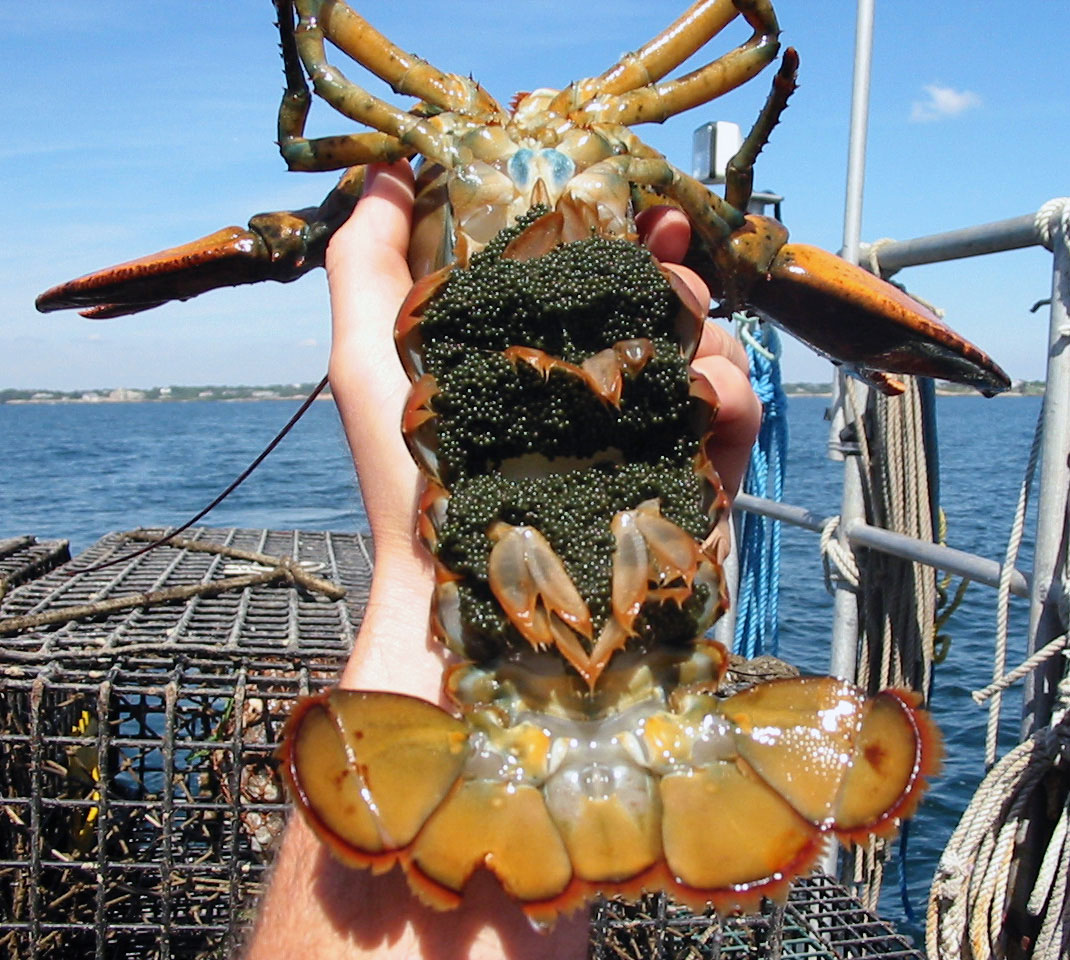 Figure 1. A “berried” female lobster carrying eggs on her pleopods. The tail flipper second from left has been notched by researchers to show that she is an active breeding female. (NOAA, 2011. Copyright fee licensing under Creative Commons.)

On average, lobster can shed times exoskeleton, or molt up to ten times during their first growing season. However, scientists note that the rate of growth and number of molts is dependent upon a variety of environmental factors including: the food supply, water temperature, sex, and geographic area. 2 After this first growing session, lobsters typically only molt once or twice each year. Lobster are not fully mature until about four to nine years after hatching. 2

Researchers believe inshore lobster in the Long Island Sound move only small amounts during their lifetime.  However, offshore lobster migrate much longer distances from the edge of the continental shelf to inshore waters to mate in the late spring and summer and then back to the shelf areas in the fall.

There is a great concern for this species, which offers great economic and ecological importance. Lobster harvesting has been a Long Island tradition since early colonial times.  The primary method of harvesting lobster in the Long is using baited pots that are set at the bottom of the Sound and marked by buoys. 2 The lobster pots that are used today are similar to the pots that have been used throughout the Northeast region for years. 2 One notable advancement that lobster industry has meet in recent years to allow young and undersized lobster to return to the water is increasing the size of the opening in the pots. 2

The American Lobster is one of the most important seafood products harvested in New York and Connecticut, both for the value it brings to the economy and helps commercial fisherman maintain their livelihood. both in terms of the total value of lobster and the number of commercial fishermen who make their living in the lobster fishery. 2 For example, in 1998 the lobster industry in New York brought in $29 million.  And according to National Marine Fisheries Service statistics, “the lobster catch was greater than the value of all fin fish combined in 1996, 1997 and 1998.” 2 Their declines since 1999 has therefore raised a great concern for the Long Island Sound community.

Connection to the Long Island Sound

The lobster die-off has a strong connection to Connecticut and Long Island Sound. The Sound is an important part of Connecticut and it also plays a vital role in the state’s economy. The Sound provides “feeding, breeding, nesting and nursery areas for a diversity of plant and animal life, and contributes billions of dollars each year to Connecticut’s economy from boating, commercial and sport fishing, swimming, and sight-seeing.” 1