More than eight million people live in the Long Island Sound watershed which includes Connecticut, New York, and several other New England states. 1 The urbanization of this region has led to an increase in pollution, altered land surfaces, reduced open spaces, and limited access to the Sound. 1

The Long Island Sound is an ecosystem, or a “community of organisms that interact with one another and with their environment.” 1 The elements of an ecosystem are interdependent.  For example, if one part of the environment changes or is altered, the entire ecosystem can be impacted. 1

Within one ecosystem, a variety of habitats can co-exist. A habitat is defined as a “place where a plant or animal lives.” 1 A habitat provides an organism with the basic needs of life such as, food, oxygen, water, space and shelter. Several different habitats can be found in the Long Island Sound ecosystem including: sandy beaches, tidal flats, salt marshes, and intertidal zones. 1

The Long Island Sound is also an estuary, or a “protected coastal body of water in which salt water from the ocean meets and mixes with fresh water from a river or stream.” 1 However, the Long Island Sound not like other estuaries, as it is not only large, but also made up of many estuaries within the estuary.  The Sound receives salt water the Atlantic Ocean and fresh water from four major rivers (the Connecticut River, Thames River, Housatonic River and Quinnipiac River) and many streams. 1 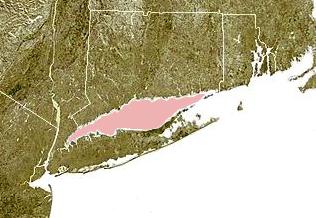 Figure 2.  The Long Island Sound is shown highlighted in pink between Connecticut and Long Island. 5

The Long Island Sound is in fact a “sound.”  This geographical term is used to describe a body of water found between an island and mainland.  The Long Island Sound lies between Connecticut, to the north, and Long Island, New York to the south.  The Sound is located at 41 degrees North latitude and 73 degrees West longitude. 1 It is about 110 miles long and 21 miles wide. 1 The Sound’s watershed covers an area of 15,820 square mile and is inhabited by about 14.6 million people. 3 Its average depth is 65 feet, but its deepest points can reach up to 350 feet.  On a globe, it’s also important to recognize that the Sound is almost directly between the North Pole and the Equator.  As a result, the temperatures can get as cold as -1°C in the winter and as hot as 22°C in the summer. 6 This change in temperature from Artic to tropical conditions gives the Sound four distant seasons and creates fluctuations in biotic and abiotic factors throughout the year.  Biotic factors are living or once living parts of an environment including plants, animals, bacteria, and fungi.  Abiotic factors are non-living and include light, temperature, weather, soil, water, air, and minerals. 6 Long Island Sound is home to many different species of plants and animals. As a result of its changing abiotic and biotic factors, species that live in of the Sound must often adapt to significant changes in temperature and salinity, a measurement of how “salty” the water is. 1

Salinity of the Sound is dependent on the time of year, weather, and tides. 1 The average salinity of ocean saltwater is 35 parts per thousand (35 ppt). 1 The average salinity of the Sound is 28 parts per thousand (28 ppt). 1 This is roughly equivalent to 28 grams of salt per liter of water. Salinity does vary at various entry points throughout the Sound. For example, after a rainstorm the salinity of water entering the New Haven Harbor from the Quinnipiac River can be as low as 15ppt. Salt water that is cold has a higher density than warmer fresher water. 1 This results in stratification, where the water on top is lighter than the water on the bottom, a stable situation, which is important to creating habitat and creating the circulation pattern.

Formation of the Long Island Sound

The Sound was formed over 20,000 years ago during the last ice age when a glacier, known as the Laurentide, covered the entire region with ice almost a mile thick. 1 As the glacier moved south it caused about 20 meters of sediments on the surface of the land to erode. 1 The area that was dug up by the glacier filled with fresh water 15,000 to 19,000 years ago and during this time, the sea level rose to the level of the fresh water, becoming what we now call the Long Island Sound. 1 Long Island was formed by the glacial moraine which is where the rock and soil are deposited at the end of the glacier. Sea levels continued to rise to the level of the current shoreline and the Sound became the estuary that it is today when the land barrier broke at Race Point.