In this lesson, students either individually or in groups, will research current technology in robotics and genetic engineering. In class, they will present their findings for a general discussion. This research will later be used in their final projects for this unit.

The resource list at the end includes a number of videos and articles that profile state-of-the-art robots, and a variety of visions for robots in the near-future. These include Boston Dynamics’5 spectacular work on robotic maneuvering, the creepy talking robot head Bina,6 self-learning robots such as iCub,7 a robotic news anchor,8 and robots who help patients in nursing homes.9 Capgemini, a global technology consulting firm, is now advertising empathetic virtual assistants.10 Students also might read articles on biological engineering and genetic engineering. It is already possible to change the human genome to avoid genetic and pathological disorders, as was recently done in China to in-utero twins, so that they would not be susceptible to HIV.11 Other spectacular, and controversial, technologies are in labs, such as one creating chimera animals to grow human organs genetically matched for a specific person.12 Another lab can enhance the intellectual powers of your brain.13 A good, short video to start with might be Jason Silva’s To Be Human Is to Be Transhuman. Another would be Machine Learning: Living in the Age of AI, produced by Wired publications. 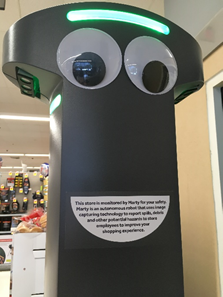 Marty the Robot in Stop and Shop

Students will also research how smart assistants might affect confidence, interactions with other humans, and brain power. What are the psychological effects of these technologies on humans, and on human bias? How will our treatment of robotic slaves affect the way we see ourselves and treat other humans? A number of studies reveal that unaccompanied minors often abuse robot assistants in stores.14 Could we navigate our world without phones? How comfortable are we in asking another human being for assistance? What does this bode for the future, when virtual assistants might be doing many more things for us? Graphs that illustrate demise in teenage mental health with the advent of smart phones in Jean Twenge’s book, iGen might be insightful. Anab Jain’s TED Talk, Why We Need to Imagine Different Futures and the quiet feature film, Robot and Frank, are recommended to spark discussions on the world of the near future. Might we program robots to be more capable of compassion than humans?  Sherry Turkle, researcher at M.I.T, wonders if “our relationships with robots makes us question the purpose of life itself.”15 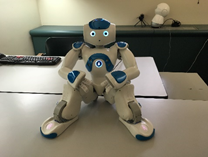 Nao, in a Robotic Study at Yale

What paths we decide to take is shaped by who we are now. It is important for students to consider the world of Mary Shelley, who also lived during a revolutionary time – not only of technology, but of human freedoms. Frankenstein explores not only the perils of technology, but bias relevant to her own era, by portraying the plight of a creature uncannily like ourselves.