The Creatures of Prometheus

Each year, fewer students arrive with a good background in religion and mythology. Moral values aside, the study of myth and religion includes stories that are good allegories for human life and human nature, and can be profoundly enlightening in ways that have little to do with belief in God. A lack of knowledge in myth and religion also poses a serious barrier to understanding literature, music, art, history, law, and society through time.

When considering the advent of intelligent robots, the connection of human as creators to gods in myths is unsurprisingly stark. After all, we created these stories based on our own awareness of our considerable intellect and creative powers: We are creatures who can conceive of time before we were born, and time after we die, yet we are mortal. We are creatures who can conceive of an empowering implement that doesn’t exist, and we create it out of our imaginations. We have language, and from this language and our memory, we pass down stories, art, discoveries, and continue to build on our knowledge. In short, we as a species seemingly have powers of omniscience, omnipotence, and immortality that we confer to our gods. Both the biblical story of Adam and Eve, dating about 2,600 hundred years ago, and the succession story in Hesiod’s Theogany dating about 2,700 years ago, show gods creating intelligent creatures, who then strive to supplant them. Students will read these stories and prepare for class discussion.

Will our own new creatures one day supplant us?

Both stories provide warnings against our own awesome powers. By the time these stories were written, the human cultures that created them had effectively conquered their worlds. Both the Israelites and the Greeks had amassed vast empires. The Greeks were on the verge of a scientific and philosophical tsunami – and both societies are responsible for engendering the impressive civilizations of the Western Hemisphere. What hath God wrought, indeed? It is important that young people today take time to read these texts from a humanistic, if not a religious perspective. Both stories relate to Frankenstein, and both reveal insight into flaws in humanity that should inform our desire to create new beings.

In the Greek story of the creation of humans, the Titan Prometheus makes humans in the image of the gods from clay, a decidedly inferior substance. They had heat in their blood and breath in their lungs, and with these contained the four elements from which the ancients believed all things were constructed: earth, air, fire, water. But Prometheus also incorporates “ether”, the fifth element, or “quintessence.” Ether is a pure, incorruptible substance, the material that made the gods and heavens. To be human, then, is to be both like the gods, and earthly, changeable, mutable, mercurial, and subject to death. The creatures made by Prometheus, and the biblical God, and the ones both Turing and Mary Shelley conceived in their works, were thus created. That is, a thinking creature put them together in a purposeful, not randomly biological, way, imitating humans.

In many stories of origin, gods create creatures that then revolt and take over, not unlike our fears of robot revolts. In Greek mythology, a generation of gods came before Titans: the earth parents of Uranus and Gaia.

In Hesiod’s Theogany, Uranus has allowed his children the Titans freedom, but imprisoned other children who threatened him – the Cyclops and monsters – inside Gaia. What woman would stand for this? 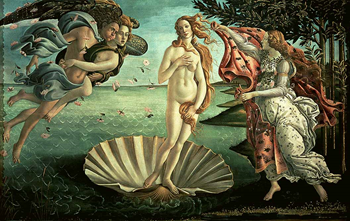 The Birth of Venus, 1480, Sandro Botticelli

Gaia engages the assistance of her son, the Titan Cronus, to render Uranus impotent, literally, by providing him with an adamantine sickle. When Cronus emasculates his father, Uranus becomes the docile sky. His genitals, tossed into the ocean, become Aphrodite. The power of women in this myth, written in a male-dominated society is not to be dismissed.

Cronus takes power. He and his sister-wife Rhea then give birth to the Olympian gods. But Cronos keeps the monsters and the Cyclops imprisoned, and wary of his own history, begins devouring his children with Rhea. Rhea takes a play from the past, and when she gives birth to Zeus, she hides him and hands Cronus a stone to swallow instead. When Zeus comes of age, a war between the Titans and the Olympian gods ensues. The children of the gods once again supersede their parents, and Zeus triumphs. (Hesiod, in Works and Days, references many races of humans being created and destroyed through ages.)

In Aeschylus’ Prometheus Bound, Prometheus endows humans not only with fire, but with intellectual gifts as well: agriculture, medicine, and the creative arts. His goal was to create another generation that would counter the destructive powers of the Olympian gods, and bring the world around to a new Golden Age. Can humans achieve this?

For punishment, he is chained to a rock, visited daily by an eagle who eats out his liver, which regenerates, only to have the torment repeated.  His savior will be Hercules, a son of Zeus, who in freeing Prometheus, will assure that the power of the gods is passed to humans.

Mary Shelley’s novel is subtitled, A Modern Prometheus, since Victor Frankenstein creates an entity who seems destined to supplant humanity. Within the novel itself, the creature comes across John Milton’s epic poem Paradise Lost, which retells the story of Adam and Eve as it appears in Genesis and the Qur’an. It is also as story of succession of power as the children of the creative god strive to attain divine powers.

In the past, when many more students attended outside religious classes, they knew well the story of Adam and Eve. They were often familiar with the story of the fallen angel, Lucifer. The Christians often believed that this was a story somewhere in the Old Testament, while the Jews thought that it must appear somewhere in the New Testament. More recently, when our sanctuary city began wondering if we should include Eid al-Fitr as one of our school holidays, the Muslim students were able to clarify the origins of the story of Lucifer or Satan, the fallen angel: It’s in the Qur’an.

In Genesis, Adam and Eve are hunter gatherers, content in their role as alpha fauna in God’s terrarium, the Garden of Eden. That is, until the snake comes along and tempts Eve to eat of the Tree of Knowledge of Good and Evil. God warned Adam that if he ate the fruit of this tree, he would die. But the snake tells Eve, no, this knowledge will not kill them – it will make them more like God. God has already endowed Adam with power over all the other creatures in Eden, and given him the gift of language to secure his power over the animals and plants. God breathed into Adam the breath of life, and gave him Eve as a helpmate, created not from mud, but from Adam’s own flesh and bone. When God discovers their transgression, they are expelled from Eden with punishments before they can eat of the Tree of Immortality. But they retain their knowledge, and their free will. In this story the creations of God are seeking His powers. If they succeed in their journey outside of Eden, the promise is that they will regain Eden, a place where divine grace and human failings flourish in a balance.

The story in the Qur’an is also very interesting in that Allah does not forbid Adam and Eve from eating of the Tree of Knowledge, since for Muslims, knowledge is a gift. He forbids them from eating of the Tree of Immortality. Once they transgress, they are expelled with the punishment that immortality will only come after death. And, it is Satan, not humans, who are seeking to overthrow God. These distinctions are important:  Seeking knowledge may not the problem, but seeking powers beyond the scope of what is possible for humans will be the source of our undoing.

Milton’s Paradise Lost, which Victor Frankenstein’s creature reads as his intellect is awakened and he begins to discover himself, unleashes a very deep question of how our human limitations shape our humanity.

This lesson should also include for a discussion on gender bias, incorporating not only Even, but the Pandora myth, and the Pygmalion and Galatea myth, as it portrays an artist who carves the “perfect woman” out of ivory. When we create our “perfect companions” what will this do to human love?