The Physics of Cooking: How Energy Conservation and Thermodynamics Can Improve the Lives of Millions

This unit is designed to be implemented during the fourth marking period as a culmination of thermodynamics. It is to last for two weeks, equal to five 80-minute class periods. Using food as a method of studying thermodynamics and energy conservation will engage students and provide real-life applications for the material. Obesity and food poisoning remain prominent issues in the United States and students will work to investigate the physics behind these problems. Upon choosing a food sample to study, students will determine the energy contained within it in terms of kilocalories. They will then calculate the amount of exercise needed to expend the same amount of energy. Next, in groups of 2-3, students will cook their food samples to determine the thermal diffusion constant of their food. Finally, students will individually write a 1-page discussion about what they learned, the importance of these topics, and the limitations of their work. Significant portions of their grade will be determined by their ability to make accurate calculations and to demonstrate understanding in their discussion paper. Related NGSS standards, learning objectives, a timeline, required materials, a more detailed description of the thermal diffusion constant lab, and a suggested grading rubric for the unit are outlined below.

Teacher checks will be required at least once per class period to ensure students remain on pace. Each day is designed for one 80 minute class period.

Day 1: Introduction to the unit, first law of thermodynamics, the physics of exercise and thermal diffusion. Students will begin brainstorming their plans for a food sample and chosen exercise.

Day 2: Calculation of energy contained in the food sample and amount of chosen exercise to burn said energy.

Day 4: Second day of thermal diffusion lab. Students will cook at least another two batches of their food sample.

Day 5: Data analysis and class discussion on the assumptions made throughout the unit and limitations of the thermal diffusion lab.

For each group of students you will need:

As mentioned previously, in order to determine the thermal diffusion constant using the simple method outline below, students will need to choose a food sample that solidifies while cooking. Brownies or cupcakes are recommended and brownies were used in the example below. The food samples will need to be cooked in small individual containers and will need to be cooked in the classroom so toaster ovens are recommended for this purpose. The objective of the lab is to determine the time it takes for the center of the food (brownie in this case) to solidify with the clock starting only once the outer edge of the brownie has solidified.  This is done using the equation, D = L2/4t, as described in more detail above. This equation requires we also know the L, which would be the distance from the outer edge to the center of the brownie, or the radius in the case of our cylindrical brownie shown below in Figure 3. To determine when the brownie solidified toothpicks were used. Some clues as to when this happens can be supplied visually but ultimately the brownies needed to be cooked several times to really narrow in on the exact time the outer edge and the center of the brownie solidified. The data shared below was generated from separate trials or batches of six individual brownies. With time and supplies limited in the classroom it is unlikely students will be able to conduct this many trials, however, at least three or four trials are recommended per group in order to get more reliable data. Data can even be pooled between the entire class (if the same method is used) to determine a class average for the thermal diffusion constant. Since only two time points are needed (the point when the outer edge solidifies and the point when the center solidifies) the toothpicks were only used to probe in two locations (the outer edge and the center) as shown in Figures 3 and 4. This differs from the four locations probed using thermocouples shown in Figure 2. Figure 5 is provided to show an example of a partially cooked brownie to demonstrate how the solid layer progresses over time, along with some other materials used in the experiment. The procedure, data, and images provided below offer a more detailed example of how to conduct the experiment.

A toaster oven was preheated to 350°F before an individual brownie was placed inside. The brownies were cooked in individual aluminum cupcake trays with a cylindrical shape giving the brownies an approximate diameter of 6.35 cm. This means the L value, or length from the outer edge to the center, was 3.175 cm. Care was taken to open to the toaster oven as few times as possible to probe the brownies and to keep the door open and the brownies outside the oven for as little time as possible. The experiment was conducted six times, with six individual brownies, to narrow in on a precise time the brownie’s outer edge solidified and a time the brownie’s center solidified.  Solidification was defined as the toothpick having no liquid batter on it after having taken it out (a small amount of solid material on the toothpick is inevitable). An example of what a post-probe toothpick looks like when the brownie’s outer edge had solidified is shown in Figure 3. Figure 4, on the other hand, shows a toothpick that probed the same brownie at the same, 20-minute mark, time point but in the center of the brownie and represents an example of what a toothpick may look like when the brownie has not solidified. Additionally, a food thermometer was used to measure the temperature the brownie batter was solidifying. The batter appeared to be solidifying at roughly 138°F. This measurement was not necessary to calculate the thermal diffusion constant; it was only measured out of curiosity. After six trials, it was determined that brownie’s outer edges solidified at approximately the 20-minute mark and the centers solidified at approximately the 34-minute mark. This made the Dt equal to 840 seconds (14 minutes). Thus, the thermal diffusion constant D was calculated to equal 0.00300 cm2/s as shown below.

Figure 3: Brownie after 20 minutes of cooking (left), toothpick with solid brownie residue (right). This toothpick was placed in the brownie’s outer edge.

Figure 4: Brownie after 20 minutes of cooking (left), toothpick with liquid brownie residue (right). This toothpick was placed in the brownie’s center. 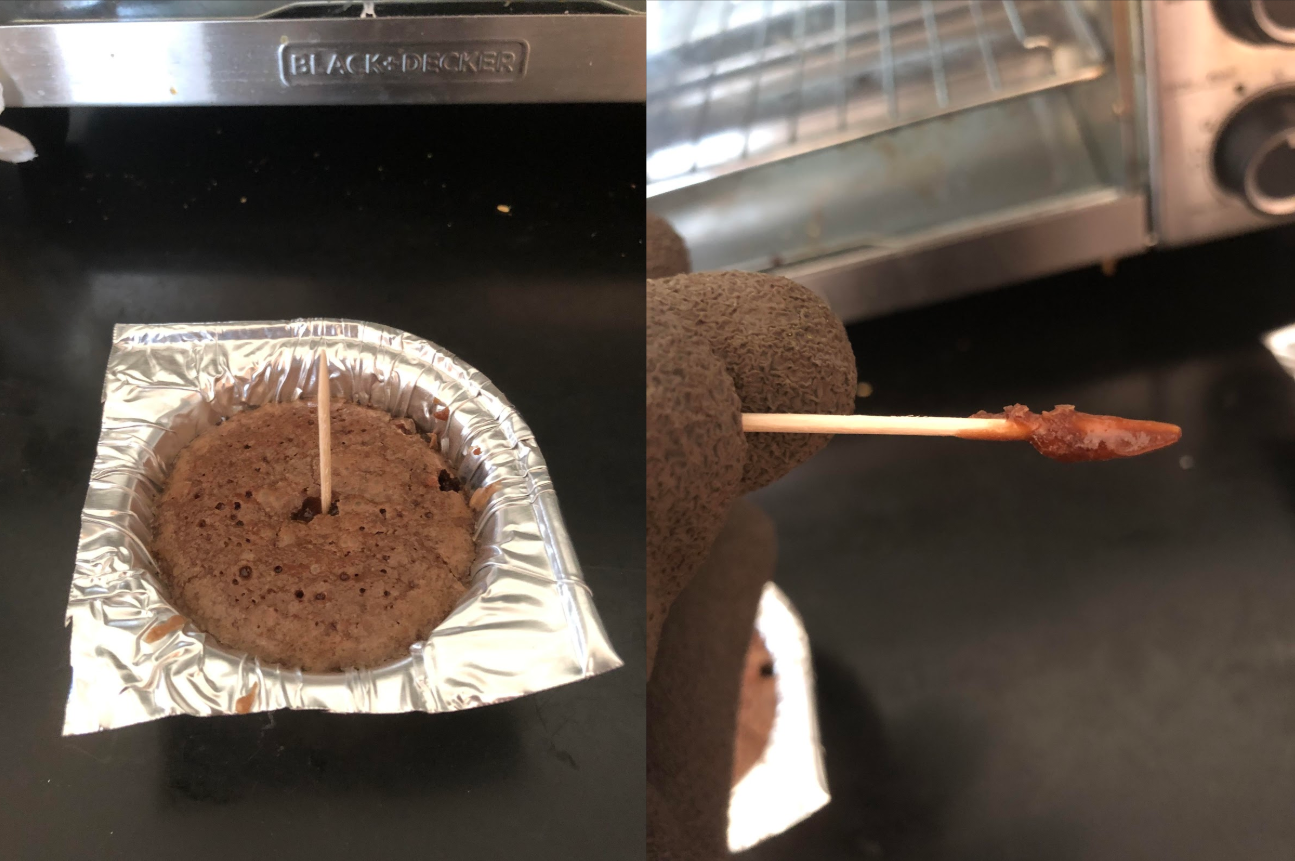 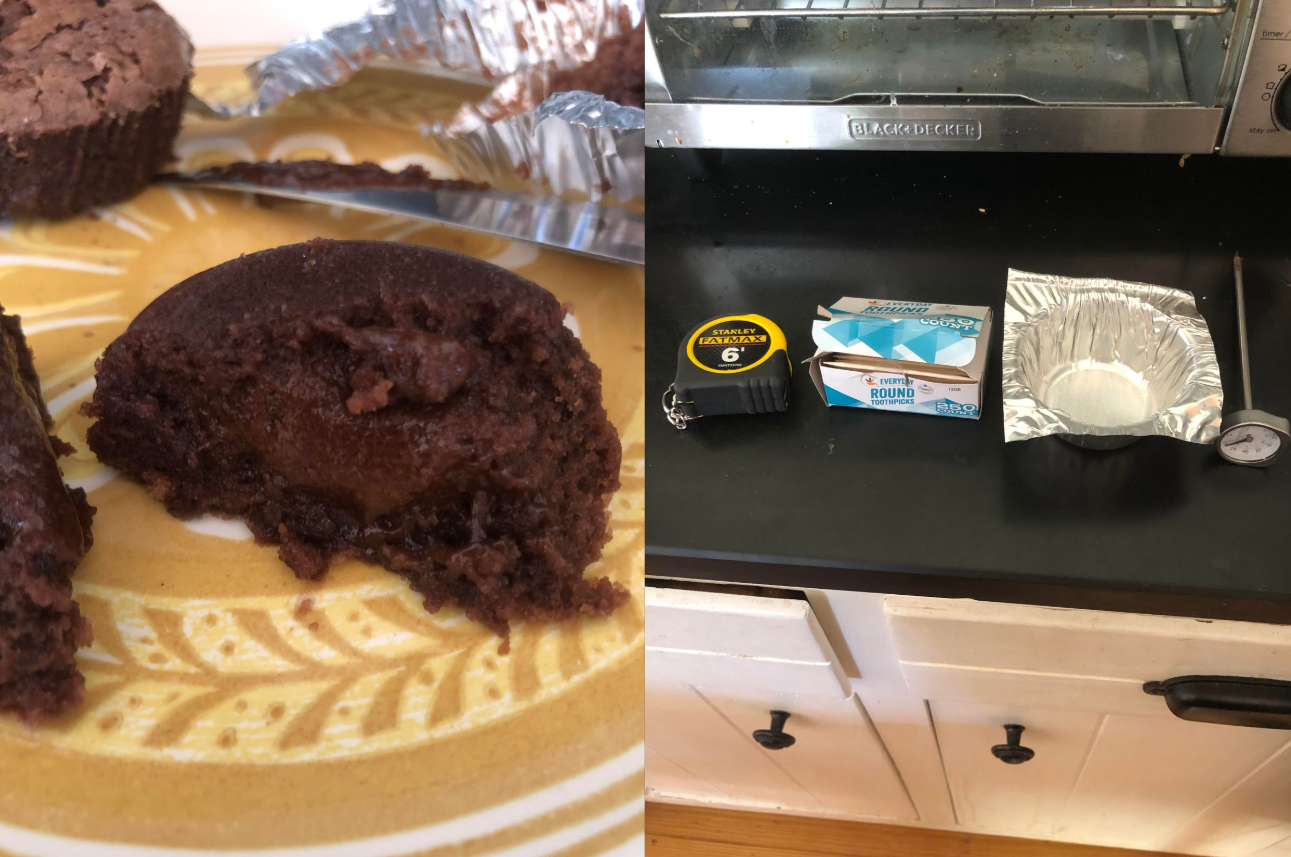