In this unit, students will demonstrate an understanding of using visual text to help them with writing expository essays. These lessons will teach students the strategies to use when looking at visual texts, in order to pay attention to detail and use descriptive language. By actively seeking the details of the ordinary, we will hone our skills of observation, which is the first step toward my students becoming confident writer. 12 By having students observe common, everyday objects that they are familiar with, they will have the confidence to become strong writers.

My unit is composed of three compare-and-contrast expository essay writing lessons. The first lesson is to introduce students to writing about visual images. The other two lessons consist of students incorporating two photographs from each period, the 1940s and the 21 st century. The first lesson is an introductory lesson to writing about visual images and to refresh students' previous knowledge on how to write an expository essay by comparing and contrasting the first cell phone and the blackberry. For the second lesson in the unit, my students will read two articles from the Britannica for Kids Encyclopedia on Pearl Harbor and September 11 th , and compare and contrast two posters pertaining to those articles.

To introduce the unit, the teacher is going to model how to compare and contrast the two cell phone pictures on the Smartboard. The cell phone pictures that are being compared and contrasted are a picture of the first cell phone that was invented in 1973 and the blackberry cell phone. The teacher will discuss with the students in whole group important details of the visual image to include when they are writing their expository essay. With the help of the students in the class, the teacher will brainstorm the similarities and the differences of the two cell phones in whole group. For the expository essay assignment, the students are allowed to compare and contrast their personal cell phone with the first phone invented. The reason behind letting the students use their cell phones for this lesson is because the students like to text and play games on the internet using their phones. In order to engage the students in writing, I decided to let them use an object that pertains to their interests. When my students are brainstorming about the two cell phones, I want them to keep focusing on the phones' overall appearance and features. The first cell phone was much larger than today's modern-day cell phone. It did not consist of data plans that included touch screens, internet, or other additional applications.

After the teacher compares and contrasts the cell phone images in whole group, he or she will then model how to fill out the graphic organizer that is shaped into an image of a cell phone so the students can use it as a guide to organize their thoughts so that they will be able to write a descriptive five-paragraph expository essay. Brad W. Baxendell's article "Graphic Organizers" states that having students visually display main key points in a lesson can benefit learners who have difficulty organizing information. They are known to be a strong representation of acquired knowledge because they help students organize their ideas and be able to understand relationships between complex ideas and recall. Baxendell also mentions that students who are Learning Disabled are more likely to generalize skills they previously learning when given graphic organizers. 13

expository essay, he or she will go over the scoring rubric with the class. The scoring rubric for both teacher and student is listed as Image 5 below. After the students are finished with their expository essays, they will score themselves on the clarity and descriptive detail of each essay they wrote using a teacher-made rubric. When the students are finished scoring themselves, the teacher will look over the students' essays and give them a score based on how well they performed this writing task.

After the teacher reinforces students' previous knowledge on how to write an expository essay, she will go over the scoring rubric with the class. The scoring rubric for both teacher and student is listed as Image 5 below. After the students are finished with their expository essay, they will score themselves on the clarity and descriptive detail of each essay they wrote using a teacher made rubric. When the students are finished scoring themselves using the teacher made rubric, the teacher will then look over the students essay and give them a score based on how well they performed this writing task. 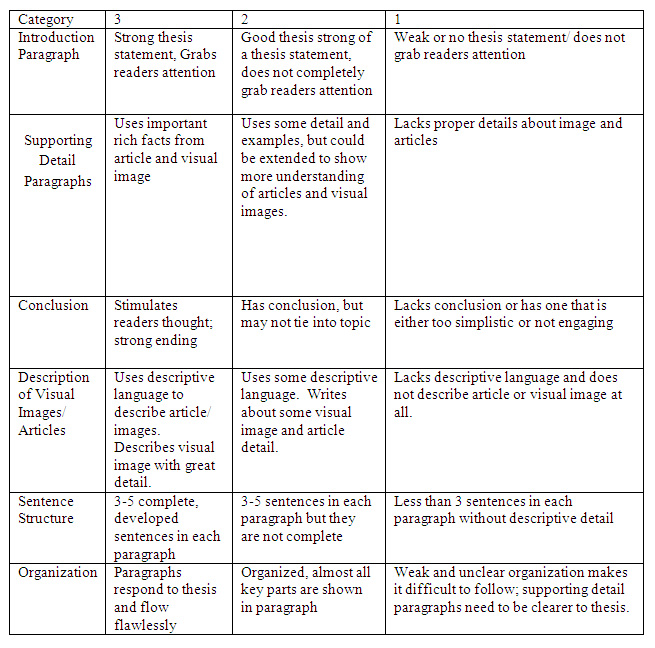 Differentiation for Teachers: If teachers do not have access to a Smartboard or an overhead projector, they will need to print out a copy of the images for each student in the class.