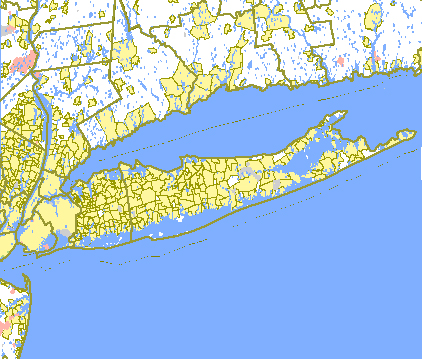 Today the Long Island Sound is 113 miles long, 21 miles wide (at its widest) and holds about 18 trillion gallons of water. Its average depth is 63 feet. 19 It is an estuary. An estuary has unique characteristics, which define its aquatic system. An estuary can be defined as a body of water that is semi-enclosed with a free connection to the open sea as well as freshwater drainage. 20 The Long Island Sound is a body of water where the Atlantic Ocean spills around and behind Long Island, mixing with the outflow of the freshwater from Connecticut rivers. These conditions form our Long Island Sound estuary. The tides, salinity, temperature, and water movement are the main features, which define this highly complex ecosystem. The tides and river flows are continuously moving the water, mixing the salt and fresh water. Changing winds and tidal movement from the ocean and seasonal precipitation affecting river flow create daily variations that characterize an estuary by a constant state of flux in terms of chemical and physical characteristics. 21 A variety of ecosystems function these conditions. Specifically, The Long Island Sound is an enclosed and well-protected, shallow body of water where salt water from the Atlantic Ocean mixes with the fresh water fed by rivers. In addition, the land mass of Long Island functions as a barrier from high seas and strong currents, softening wave height and strength resulting in calmer water movement. It is bordered by Connecticut to the north, Long Island to the south, and New York to the west creating a sheltered "tub" where strong ocean currents are escaped and rough seas of the open waters are calmed. The Long Island Sound is a safe, gentle backyard and nursery for the young. The shallow conditions create warmer waters as well as contribute to the calmer waters. The mixing of fresh and salt waters creates variable salt levels for which animals and plants uniquely adapt. These qualities create a unique environment for the spawning, mating and rearing of young sea creatures. An estuary is one of the most important habitats on our planet because it is able to provide the life-sustaining systems for nourishing, protecting, and housing vast numbers of species during their early lives, supporting the fragile infants of the sea; it is the ocean's nursery.

The Long Island Sound estuary is one of the most valuable and productive ecosystems. One reason it is so productive is that the water filtering into it from the watershed brings a rich supply of nutrients that provide nourishment to the diverse inhabitants. The Long Island Sound also serves as feeding, breeding, and nursery area for many species that spend most of their adult lives in the ocean. The LIS estuary is home to more than 1,200 species of invertebrates, and170 species of fish, and dozens of species of migratory birds live there at least part of the year. 22 The LIS serves a variety of purposes for sea creatures. Some creatures live their entire lives in the estuary, while others begin their lives in the estuary then move to other habitats. Other creatures move in and out of the estuary while others migrate through the estuary destined for other waters. 23 The movement of sea creatures in, out, and through the LIS, adds another layer complexity to this vibrant ecosystem.