The Pelagic and Epipelagic Zones 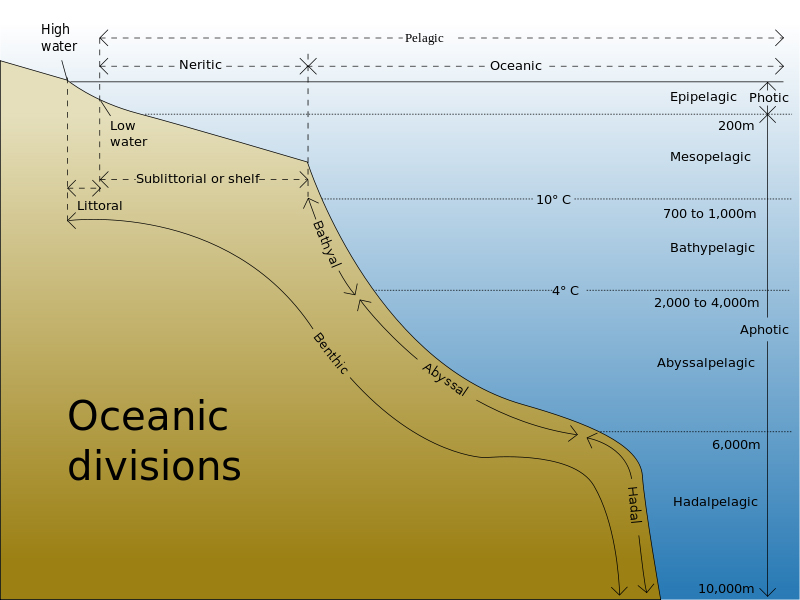 The epipelagic or photic zone in the sunlit area of the pelagic zone. It is called the sunlit zone because the sunlight is able to penetrate the water. This area is the habitat for ninety percent of all ocean life because of the warm temperature and sunlight. Since this is the only zone in the water column that is able to fuel photosynthesis, it is home to all plant life. This plant life supports all other life in the marine system. The value of aquatic plant life is highly significant because it is the very base of the food chain. Furthermore, aquatic plants contribute significantly to the oxygen of the atmosphere as well as the dissolved oxygen in the water needed by aquatic life. The depth of this zone depends on the clarity of the water allowing the transfer of light energy needed for fueling photosynthesis. Water turbulence, sediment, and climate can have an effect on the ability of light to filter through the water affecting the depth of this zone, however, this it can reach the depth of 660 feet because the sunlight is able to penetrate to this level. Since this zone is richly packed with food, plants and plankton, many sea creatures inhabit this zone. Some sea creatures living in this zone in the LIS include the shark, sea turtles, jellies, bluefish, and salmon to name a few. The light which characterizes this zone has resulted in an adaptation called counter shading. Counter shading in a method of camouflage. Fish have lighter colored belly than their top so when a predator looks down form above the fish will blend in appearing darker like the depths. In contrast, when looking from below a fish, the belly is light like the sky making it more difficult to see. 24

The Benthic Zone is the ecological region of the sea floor with a vast array of diverse plants and animals. Organisms that live in the benthic zone are called benthos. The Long Island Sound floor is made up of sand, mud, silt, decomposing organic matter, as well as rocky reefs, which contribute to the character of this unique habitat. Organic matter from higher in the pelagic zone sinks to the sea floor. Decomposing organic material such as dead fish and animal feces is an energy source for the benthic zone providing bottom dwellers with needed nutrients. Dead marine creatures, feces of sea life, and decomposing plant material provide food for these bottom dwellers and their dissolved nutrients are recycled. This group of sea creatures is different from other creatures because of their adaptation to life on the sea floor. Some adaptations include the need for less light, food, response to water movement and ground movement. Some creatures in the benthic zone attach themselves to rocks, boulders, or the sea floor. Other creatures burrow into the flooring while still other benthic creatures crawl freely along the seabed. The benthic zone provides a habitat for spawning, foraging, and refuge for a variety of fish. The sizes of benthic organisms have a broad array ranging from microscopic bacteria to large flounder. Sponges, coral, starfish, mollusks, lobster, crab, and sea anemones are some of the creatures that live in this habitat. Benthic organisms are divided into two categories based on were they make their home. The ocean floor is one habitat and an inch or two into the ocean floor is another. Those living on the surface of the sea floor are called epifauna. Creatures that burrow into the ocean floor are called infauna.