The Art of Biography

One of my purest pleasures from my childhood arrived with the Sunday paper and its full color comic insert. These have become smaller over the years. One hundred years ago, single comic strips covered entire pages, unfortunately we've come a long way since the golden age of the newspaper comic strip. I like to illustrate this by showing students examples of golden age strips, like Little Nemo in Slumberland by Winsor McCay, Gasoline Alley by Frank King, or Krazy Kat by George Herriman. Yale University Press's Masters of American Comics anthology is a great resource that has many superb full–color reproductions of these Sunday strips in addition to biographical essays about their creators.

Today, we're going in search of the perfect panel, a single panel cartoon that says it all. One of my favorites comes from an offbeat comic "strip" syndicated when I was a kid called The Far Side by Gary Larson (I put strip in quotes since it was a single panel cartoon, like The Family Circus ). In the panel I like to show my classes we see a man and a lion in a full elevator, addressing the other riders. Beneath is the caption, spoken by the man with his hand on the lion: "'Don't be alarmed folks . . . He's completely harmless unless something startles him.'" 4 This is a great example of the perfect panel because of its multiple levels of irony, a concept that can be difficult for adolescents to comprehend. Explain to students that there are multiple types of irony, including situational, verbal, and dramatic and this single panel uses all of them. First, the situational: We do not expect a lion in an elevator. Therefore, our basic assumptions about what is normal are subverted. Second, the verbal: Here is a man telling his fellow riders there is no need for concern when, clearly, there is. Finally, the dramatic: We know something those other riders don't know. Because of our perspective facing the elevator's closing doors, the reader knows those doors are about to close on that lion's tail, which will, of course, startle the lion. This is a brilliant strip for so many reasons, chiefly its visual juxtaposition of the ordinary (riding an elevator) with the extraordinary (there's a lion on the elevator). Another incredible achievement of this panel is that it works by suggestion. The only part of the lion we see is its rear end. This is precisely how this cartoon works so well. We see that there is cause for alarm. The riders, facing us, do not. It is this simple shift in perspective that creates comic tension. We know what the riders are in for once those doors close; the riders do not.

Irony is usually achieved in two ways in comics—understatement and overstatement. This The Far Side panel works via understatement. Contrast the mundane elements of the cartoon—the people in business attire, the elevator setting, the clichéd reassuring pet owner—with the extraordinary—hey, there's a lion in the elevator.

Overstatement is achieved through caricature. Can someone explain to me the difference between a portrait and a caricature?

Once student explains, have students create a caricature of a teacher at their school (yes, you too will be fair game). Explain that this caricature must be done from the shoulders up, and should emphasize a standout facial feature.

Draw a picture on the board of two stick figures talking. Draw blank dialogue bubbles above both of them (see Figure 3). Ask students for suggestions as to what these two characters might be saying. If the students have difficulty, start by filling in one of the bubbles with a leading quote. Trust me, they'll have plenty of suggestions. 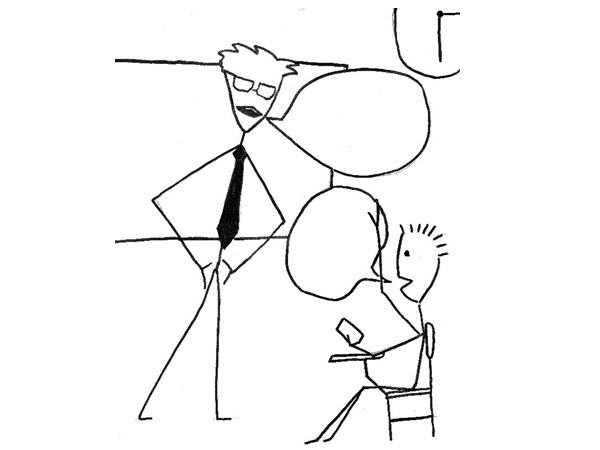